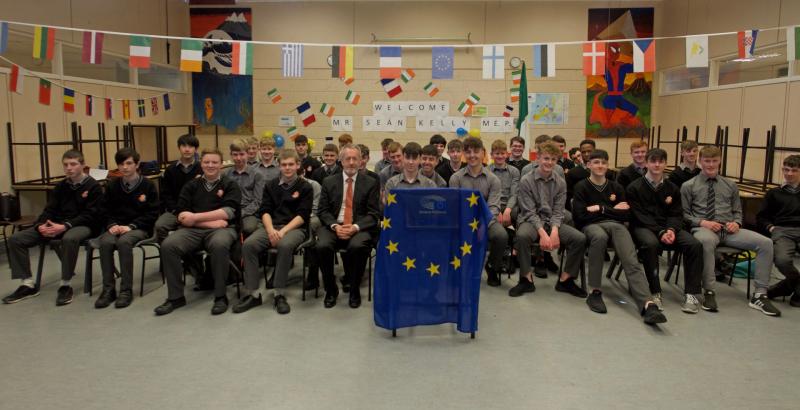 Carrick-on-Suir CBS transition year students were treated to a visit and talk by Sean Kelly MEP recently as they celebrated Europe Day and completing the European Parliament Ambassadors Programme.

This was the first year the school delivered the EU programme, with a group of junior ambassadors representing CBS attending a special Ambassador School award ceremony at Brú Ború in Cashel last month where they collected a plaque and certificates for their school.

The programme’s six modules are designed to raise awareness and understanding of the EU. The programme was welcomed by the students, who worked together and hosted events in their school and in conjunction with other schools, to explore the culture, languages, food, currency, the Erasmus programme, policy decisions and the core values of an integrated Europe which respects human rights and democracy.

Sean Kelly MEP was delighted to talk to the students and was warmly welcomed by deputy principal Myles Mitchell and language teachers Linda Barry and Mrs Moylan. Kelly outlined his own role within the EU and how he represents Ireland South. He was first elected to the European Parliament in June 2009 and was re-elected for a second term in May 2014. He will be up for election in 2019, “depending on the stability of the Government”.

Kelly spoke of the current negotiations on Brexit, the difficulty in changing legislation and other EU issues of interest. Kelly regaled the path of history and the determination of countries to live in peace following WW1 and WW2. He also spoke on the reduction of emissions through solar and geothermal clean energy sources and the move away from fuel powered transport to electrically powered transport. He highlighted his role in helping manage the Data Protection Regulation legislation which became law on May 25, and underlined how member countries all contribute into a financial pool within the EU from which allocations of funding are evenly distributed amongst the weaker member countries and how each member state has benefited over the years through grant provisions.

Kelly took time for a Q & A session with the Carrick-on-Suir students, discussing his sporting past and love for GAA. His time away from Brussels is spent traveling around the constituency and attending many functions. “It is work that I thoroughly enjoy,” he stated.

CBS students presented Kelly with a gift, before enjoying refreshments and a social chat in the assembly hall.