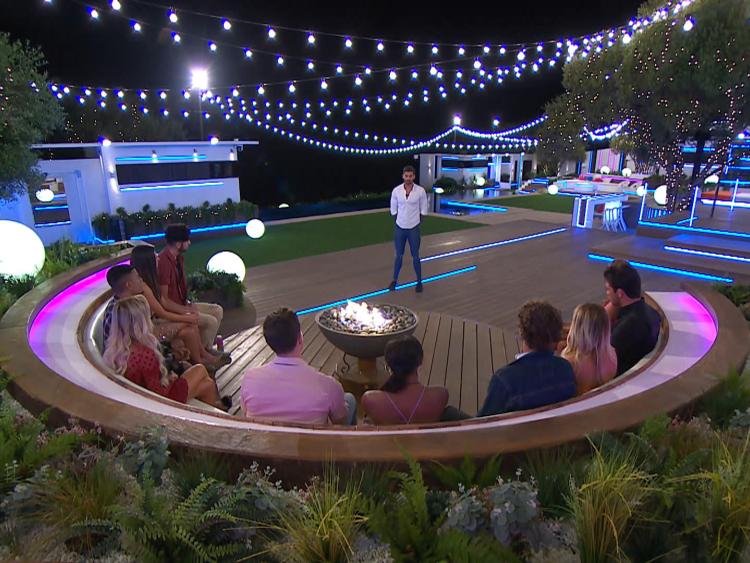 Love Island continues on 3e on Tuesday night at 9pm.

Love Island continues on 3e on Tuesday night at 9pm and things are tense in the villa as single boy Adam has the power to choose to couple up with any girl he likes.

Samira is currently with Alex, Laura is with Wes, Dani is with Jack, Kendall is with Niall and Hayley is with Eyal. Which girl is he going to steal and which boy will be left single?

The Islanders are gathered around the fire pit, awaiting Adam’s decision.

Adam tells them: “The decision that I’ve made is based on the chats that I’ve had. I’ve tried to get to know all of you one by one. The girl that I’ve decided to couple up with, from the conversations that I’ve had [with her] she is a good person and she definitely ticks a lot of boxes for me.”

Adam steals his girl, leaving one boy single. The new single boy is then sent a text: “You are now single. At the end of the week all Islanders will take part in a recoupling. The Islander not picked to be in a couple will be dumped from the Island.”

Adam’s decision sends shockwaves through the villa and he and his new girl are sent on a date immediately.

Hayley gets a text: “Islanders, it’s time to find out who has come with the most baggage as your scandalous secrets will be revealed in today’s challenge #excessbaggage #anythingtodeclare #kissandtell.”

The Islanders are nervous about what might be revealed about them.

“I’m excited for a challenge though,” Hayley smiles.

Dani says: “It’s our first challenge so I’m obviously really excited but I’m also really nervous. The ‘kiss and tell,’ our secrets, I don’t think I’ve got that many bad secrets. I hope not anyway”.

At the challenge area, Dani reads to the group: “Islanders, it’s boys versus girls in today’s challenge ‘Excess Baggage.’”

One at a time, the girls’ suitcases will come down the baggage shoot onto the spinning carousel, landing on one of the boys’ sections. Whichever boy it lands on must then open the case and read the fact about the girl that is inside, then he must snog the girl that he thinks that fact is about. Finally, he must reveal the name on the luggage tag to see if he was correct.

Then the boys’ suitcases will come down the baggage shoot onto the spinning carousel landing on one of the girls’ sections. She must then open the case and read the fact about the boy that is inside, then she must snog the boy that she thinks the fact is about. Then she must reveal the name on the luggage tag to see if she was correct.

The team with the most points at the end will win.

Samira reads: “This boy says he has cheated on all his previous girlfriends.”

Alex reads: “This girl has only ever slept with one person.”

Eyal reads: “This girl claims to have dated a well-known Hollywood movie star.”

Niall reads: “This girl can’t remember all the names of the people she has slept with.”

With the Islanders’ personal baggage being revealed and the girls and boys being shocked by each other’s antics, how will this affect the couples back in the villa?

HAYLEY AND EYAL DISAGREE ON THE GAME OF LOVE

Eyal and Hayley are speaking about their fate in the villa. With the tension around Adam’s choice to couple up and leave one boy single, Hayley says: “You saw what can happen in a day, by the time we recouple things could have changed.”

“Is it a game?” Hayley asks shocked, “I thought you didn’t have a game plan?”

Eyal tells her: “I don’t have a game plan but this whole thing is made to be a game.”

Eyal disagrees: “This is a game. But I’m going with what I feel at that time 100 percent.”

Hayley picks up on his response: “At that time? So it could change tomorrow?”

Hayley seems annoyed that Eyal thinks they are all part of a game and she seems to start to mistrust him.

In the Beach Hut, Eyal tries to explain: “The point that I was trying to make is that I’m not in here to mess anyone around, to hurt anyone’s feelings but Love Island is a game and if anyone else walks through the door and catches my eye, then that’s who I’m going to go with.”

Meanwhile, Hayley shares her annoyance in the Beach Hut: “I was p*ssed off to tell you the truth and then I was like, I don’t even want to speak to you.”

Are Hayley and Eyal on the rocks already?

DOCTOR LOVE IS LOSING HIS PATIENCE

Jack and Alex speak about Alex’s relationship with Samira.

Alex explains: “I feel quite frustrated because I’m making a lot of effort with her and trying to chat to her and trying to be normal and she is basically quite dismissive. Part of it is that we were put together in quite an awkward scenario and because it’s awkward, it’s difficult but she’s not just letting the barriers down and saying ‘actually let’s get to know each other, maybe he’s got something to him that I do connect with’. I haven’t been given any chance.”

Jack tells him: “I agree with you, if she’s not going to give you a chance to see if it’s something that she likes then it’s pointless.”

Alex continues: “We are different people but different people can be friends and stuff, she doesn’t give me the time of day so I think I need to move on now and get to know some of the other girls.”

In the Beach Hut, Alex explains: “I have made a lot of effort to chat to her and make some civil conversation and I just think she’s just not really interested in making any effort. In fact she made that quite clear so I’m just going to move on and stop making any effort in that way. I’ll be civil and polite and things but I’m not going to go out of my way.”

Meanwhile, by the pool Samira talks to Laura about Alex. “I don’t want to flirt with him, it’s not like I’m not trying to be his friend, I am trying to avoid the conversations,” she explains.

In the Beach Hut, Samira says: “With Alex I just feel so awkward. We just don’t have a connection, we don’t really have much to say and I don’t know what Alex is thinking about me, I’ve not really spoken to him at all today.”

With a recoupling later this week, will Samira and Alex make a go of staying together or are they looking to couple up elsewhere?