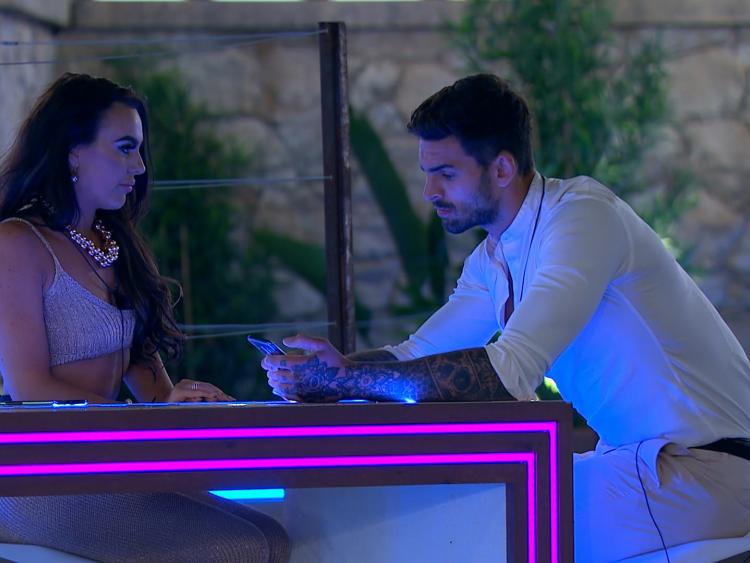 Love Island continues on 3e on Thursday at 9pm.

LEAST COMPATIBLE COUPLES IN DANGER AS A DUMPING LOOMS

A Love Island couple could be about to leave the villa forever as a shock text sees the pairings forced to make a difficult decision that will put two couples in dangeR.

Eyal receives the bombshell news as the Islanders enjoy an evening together in the villa. “Islanders, tonight each couple must vote for the two couples who they think are least compatible. Those who receive the most votes risk being dumped from the island tomorrow. You must now discuss in your couples who you are going to choose and then submit your decision by text. You must not discuss your decision with anyone else #theglovesareoff #judgementday”

Retreating to a private space in their couples, the debate then begins, with Wes stressing to Laura that they have to put their personal feelings about the individuals to one side. “The only fair way to do this is to answer the question, which is based on pure compatibility. It’s not about who we like the most, who we get on the most with. I think that’s completely unfair to do that. It’s not something to be taken light heartedly.”

Aware that their loyalty in sticking together as a couple may now work against them, Alex concedes that him and Samira could well be at risk. “We’re the friendship couple – yeah of course we do feel vulnerable.”

As each couple casts their votes over text, Megan predicts that the couples’ choices will have major repercussions. “There’s going to be a weird atmosphere after.”

EYAL’S ANGER AS ALEX UPS HIS GAME WITH MEGAN

Eyal is fuming after it becomes clear that Alex has sought out Megan for a conversation behind his back, and the situation escalates when Eyal finds out that the other boys plotted to distract Eyal while Alex was making his move. Questioning their disloyalty towards him, Eyal confronts the boys and makes it clear they have broken his trust.

Condemning Alex’s pursuit of Megan, Eyal vents in the Beach Hut: “I just feel like Alex owed it to me to come and speak to me. He’s just gone behind my back and not given me the opportunity to have my moments with her you know. He owes me the respect to come and say it to me before he goes and does it.”

Pulling Alex to one side in the garden, Eyal makes his feelings clear: “I feel like you’ve kind of really gone and disrespected me when all I’ve tried to do is give you and show you the utmost respect.”

Alex interjects: “What do you mean?”

Eyal continues: “That obviously I’ve worked hard in order to get the outcome I’ve got with Megan and I think it at least deserves you to kind of let that be and allow me to have a chance to make something there and then you haven’t been honest with me…”

An indignant Alex testifies: “I have been honest with you.”

Eyal responds: “No you haven’t.”

Alex continues to defend himself, as he protests: “Basically I felt that before the recoupling I didn’t get the opportunity to speak to her. You know the whole recoupling thing last night, I felt like you put a lot of pressure on that situation.”

Eyal interrupts: “The pressure was on.”

Once again, Alex firmly puts his point across: “You’re not letting me speak, you’re not having a conversation, you’re just getting angry. I feel that in the last 24 hours, you’ve put pressure on quite a few situations. I don’t feel that you gave me the space to talk to her, so I’ve gone and had a conversation with her. I just asked her ‘what happened last night?’, ‘was it to do with the fact that I didn’t lay it on thicker?’ and actually, do you know what, part of it’s for me to know, in the future should I be going for it? I didn’t mean to upset you in anyway and I apologise for that.”

With the rift between them apparent, Eyal gives his own take on Alex’s actions in the Beach Hut:“We have all always spoken about us being open and honest with each other. And I think he owed it to me because I’ve been there for him throughout this process. I have my own morals and values that I stick by and I would always, and maybe I expect too much from people.”

In spite of Eyal’s resentment towards Alex, the other boys speak out in favour of Alex and his renewed confidence in approaching Megan. Adam declares: “I’m proud of Alex. He’s ate the opportunity up tonight. He’s got a fresh haircut, he’s changing his outfits up, he’s taking life by the balls.”

However, having hatched a plan to distract Eyal while Alex seized his opportunity for one on one time with Megan, Adam admits he’s uncertain about how Eyal will react should he find out. “If Eyal does ever find out that we were distracting him, I don’t know if he will see the funny side. We were just opening up a door for Alex.”

Sure enough, the news quickly makes its way back to Eyal courtesy of Megan, and once again Eyal is outraged. “I’m slightly p***** off, I won’t lie, I didn’t expect it from the boys. I want to say something but at the same time, Megan has told me in confidence and I don’t want to rat her out because I think that will just screw things with me and her. So I don’t know.”

Deciding he has no choice but to call out the boys’ betrayal, Eyal rounds them up for a frank conversation. “You came up with this little plan but you obviously called me over and to be honest, one -  you’re mugging me off about what I believe in, but two - you sat there and had a plan so that Alex could go and take Megan off, and all I’ve ever been is loyal to each one of you. I’m fuming. If you would have called me over and just said to me ‘we’ve done this because we want to give Alex a chance to get to know her and we feel like you should just stay here, I honestly, one million percent, would have been cool with that.”

Refusing to accept Eyal’s argument, Alex once again stands up to him, as he declares how his own advances towards Megan were completely fair. “Recoupling doesn’t mean you’re in a relationship. It’s honestly just a situation where you’ve chosen someone to spend more time with. Exactly as you’ve said from the start. You said that yourself.”

Can the boys overcome their differences or has Eyal’s Megan romance killed off a bromance?

HISTORY REPEATING AS HAYLEY GETS COLD FEET WITH CHARLIE

Just a week after her own lingering doubts put paid to her pairing with Eyal, it seems Hayley is once again having cold feet – this time with Charlie, just days after recoupling with him. And Hayley’s distance towards Charlie hasn’t gone unnoticed.

Voicing his frustrations about Hayley and her frosty vibes, Charlie admits: “I do want to get to know her more. But I feel as if she’s being a bit muggy to me. I feel it’s all coming from me. I compliment that girl every day, every time there’s a group conversation, I go and sit with her. I’ve not had her once come up to me and hug me or kiss me.”

Offering him some guidance on how to take things forward, Jack pushes Charlie to remain resilient. “There’s no one else in here that you want to couple up with. At the end of the day you were happy that she picked you. You wanted her to pick you. That says something in itself. She could have picked anyone she wanted really.”

Hayley meanwhile confides in the girls as she admits she’s unsure if she sees potential in Charlie. “I don’t know where my head’s at again, it’s annoying me because I feel like I’m being dead fussy. But neither do I just want to rush something with someone… At the end of the day, if I’ve got some element of doubt in it I’m not going to put everything into that one person. That’s not saying that I’m ruling him out getting to know him, as I am in a couple.”

Has Hayley found herself in another Love Island couple that’s over before it’s begun?

HAS WES FALLEN TOO DEEP WITH LAURA?

Laura is panicked after Wes informs her that he is falling for her, and once again her concerns about the age gap between them start to prey on her mind.

The following morning, Laura resolves that she needs to speak to Wes about the meaning behind his words, having discussed his declaration with the other girls. “He said to me ‘I think I’m falling for you’ and I was just like ’don’t say that to me’. Don’t sit there and say ‘you’re falling for me.’ You’re not falling for me. It’s been a week! I don’t like it. He doesn’t even know what love is. He’s never been in love before.”

Discussing her apprehension in the Beach Hut, Laura admits: “It’s very nice to hear, but I’m just very aware of people saying things that they don’t mean or it’s very early to be saying something like that. I know he didn’t say love but for me it was similar. Maybe a miscommunication. But I really just want to be on the same page. I don’t want him being like ‘oh my god, I’m falling in love with Laura’.”

Wes is quick to defend himself: “I’m just saying, I can see the start of it. If there was going to be a start it would be now. I’ve never felt this after a week so if I was ever going to say the ‘L’ word, this would be the start.”

In the Beach Hut, Wes admits that going forward he only has eyes for Laura. “It’s weird, you don’t realise until you’re in here, how fast you can form relationships and feelings and stuff like that so it’s shocked me, and it’s quite scary. I’ve not had eyes for anyone in the villa and yes it’s a bit silly because you want to keep your options open in here but I literally have tunnel vision on Laura at the moment and I think ‘yes that leaves me vulnerable’ but I don’t really care.”