LOVE ISLAND CONTINUES ON 3E ON mONDAY AT 9PM. 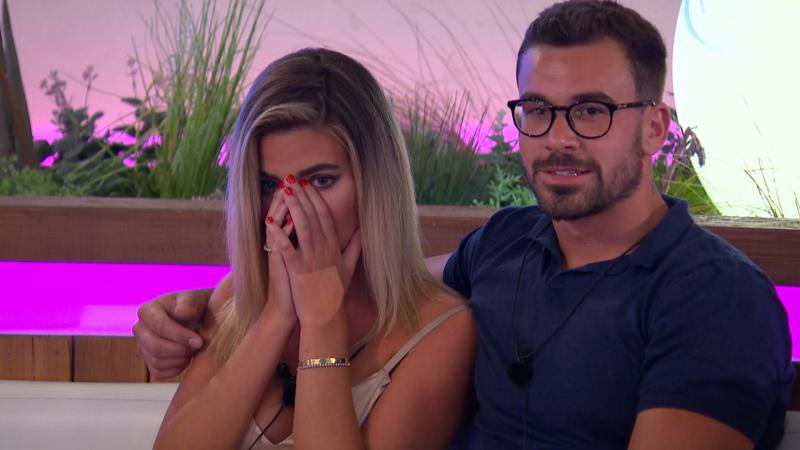 Love Island has just been rocked by a Villa Story video sent to the girls in the main villa, showing some of what the boys have been getting up to in Casa Amor.

The new boys in the main villa are watching the girls react to the Villa Story video.

The girls watch the video again and Georgia notices Josh jumping on the bed excitedly after a girl walks out of the room.

Georgia shows the new boys the video and questions what it means that Josh is getting excited about the other girl. She storms off before Laura goes to speak to her.

Georgia says to Laura: “He was frustrated because there was another girl in that villa that he fancies and he doesn’t know what to do. I have been loyal the whole time I’ve been in here because I fancy Josh and I see a future with Josh. Why is he not being loyal to me?”

In the Beach Hut, Laura says: “Video pictures say a thousand words, you never really know the ins and outs but it’s definitely rocked the boat.”

In the Beach Hut, Georgia says: “I’ve been loyal to him the whole time I’ve been in here and then he’s thrusting like that. Get a bloody grip!”

New boy Jack tells her: “It doesn’t look great but you don’t know, it’s boys around boys. He’s a boy, we just do dumb stuff when we’re around each other.”

Over in Casa Amor, Sam and Ellie are speaking to Josh and Kazimir and teasing them about their matching yellow swimsuits.

Kazimir jokes: “It was meant to be.”

They talk about the girls in the main villa and who might be cracking on with the new boys.

Josh says: “Georgia might, maybe. My head is saying she won’t but my heart is saying I hope she is.”

Meanwhile, Wes and Jack are talking about missing Megan and Dani.

Meanwhile in the main villa, Megan and Samira are having a chat about the boys over in Casa Amor.

Megan talks about her feelings for Wes: “I’m unsure about Wes. I know that I definitely like Alex. It’s not a case of ‘we’ll see,’ I definitely know I like Alex. I hope for my sake that Wes has cracked on.”

Later, Georgia talks to Dani about the clip of Josh: “I’ve not batted an eyelid at any guy in a relationship kind of way because I am falling for him, I am.”

Dani says: “Me and Jack are boyfriend and girlfriend, he is my boyfriend. I have been so committed to that boy. As soon as the boys walked in, I was not interested. I’ve got a boyfriend, I’m very happy. That is it. I basically love the kid, I honestly do. Every time I see him I’m like 'fit'.”

Later, new boy Jordan is talking to Georgia about the video from Casa Amor and Josh’s reaction to the other girl in Casa Amor. He says: “If he likes you, why would he do that?”

Georgia says: “I feel like sometimes boys can be boys. When you came in here, you were completely my type and I even said to the girls, ‘he is so fit’ however because I can’t talk to Josh about how I feel, I’ve got to go with the loyalty trait and that is what I carry with me through thick and thin.”

Jordan says: “Say he did bring another girl back, how would you react to that?”

Georgia says: “I really don’t know. I can see a future with him.”

Dr Alex is getting to know Grace in Casa Amor.

Grace talks about her type: “I like men taller than me, nice teeth, mannerisms are a big thing for me, someone who is polite, easy to talk to, someone who knows right from wrong. I’ve been focussing so much on my career, I haven’t really had time to date.”

Alex tells her: “So you’re a hairdresser, I’m a guy who needs a bit of a trim!”

In the Beach Hut, Alex says: “I really like the fact that Grace is really positive, she’s got a real energy about her and that’s a really attractive trait in someone. She is growing in the villa and she is growing on me as well.”

In the Beach Hut, Grace says: “Alex is a really nice guy, we’ve got a lot in common and it’s been really nice spending time with him today. I could talk to him for hours. He’s so interesting and there is so much more you can find out about him.”

In the Beach Hut, Alex talks about Grace and Charlie, both of whom he has got to know over the past few days in Casa Amor: “It feels a bit like the ball is in my court. I need to decide who I have stronger feelings towards.”

Who will Alex see as his perfect match? RECOUPLING SENDS SHOCKWAVES THROUGH THE VILLAS

In the main villa, Megan gets a text: “Girls tonight there will be a recoupling in which you must decide whether to remain coupled up with your boy who has been living in Casa Amor or twist and recouple with a new boy. #StickOrTwist #WheresYourHeadAt”

In Casa Amor, Dr Alex gets a text: “Boys, tonight there will be a recoupling in which you must decide whether to remain coupled up with your partner back in the villa or recouple with a new girl. #StickOrTwist #CasaNoMore”

In the Beach Hut, Jack says: “I think there is going to be a lot of drama tonight.”

In the Beach Hut, Josh says: “I’m not in the business of breaking hearts. I know Georgia likes me and I do like Georgia.”

In the Beach Hut, Alex says: “This is a huge shake up. This recoupling is going to be the biggest shake up in the villa. It’s going to be huge.”

Alex is talking to Adam and Sam, weighing up his options after receiving the recoupling text: “On the one hand, I have a connection with one girl and we’re having a laugh and a lot of fun but then things weren’t going any deeper than that and then unexpectedly someone else has caught my eye and Grace is really open and she’s really good fun and kind and nice. I like her. She is very driven. I’m still trying to work out in my head what I should do and what decision I need to make.”

Caroline enters the main villa where the original girls and new boys are gathered around the fire pit.

Caroline says: “Girls stay where you are. Boys come and stand with me.”

Caroline tells Megan, Dani, Georgia, Laura, Ellie and Samira: “As you know, tonight there will be a recoupling. Girls you each have a big decision to make. I will now ask you one by one if you want to stick with your current partner who has been living in Casa Amor for the past few days, or if you want to recouple with one of these handsome boys. The boys in Casa Amor have also been given the choice of whether they want to stick with you or recouple with one of the new girls.”

“Megan, I’m going to start with you, please stand up. As your partner Eyal was dumped from the Island, you are officially single. But before the boys left for Casa Amor, you were romantically involved with Wes. Now you have the choice. You can stay single and if Wes has [not brought a new girl back], you two could pick up where you left off. Or has one of the new boys caught your eye?”

Caroline asks her: “And who would you like to couple up with?”

Caroline tells them: “Congratulations guys, you are our first couple. Alex, go and join Megan.”

Caroline continues: “Now we also had a single boy over at Casa Amor, Adam, who has been single since Zara was dumped from the Island. It’s now time to find out if Adam has stayed single or coupled up with one of the new girls.”

Has Adam brought back one of the new girls or will he stay loyal in his feelings towards Zara?

Starting with Ellie, one by one, the rest of the girls stand up and decide if they want to stick with their boy who has been staying in Casa Amor, or whether they want to recouple with one of the new boys.

To Laura, Caroline says: “You were coupled up with Wes before the boys left for Casa Amor. But as we know you guys had broken up and Wes had been getting closer to Megan. The choice is still yours though. Would you like to stick with Wes or would you like to recouple?”

Laura shares her decision before Wes walks back into the villa alone. Because Wes didn’t bring a new girl back from Casa Amor, he is now single.

Dani stands up to make her decision in the recoupling. Will her and Jack stay loyal to each other?

Next up, Samira makes her decision. Will Sam recouple and bring back a new girl from Casa Amor?

Finally, Georgia makes her decision whether she wants to stay loyal to Josh, or recouple with one of the new boys. What decision will she make?

After toying with his decision over the past few days in Casa Amor – whilst getting close to Kazimir – will Josh return to Georgia or bring a new girl back from Casa Amor? Will Georgia be left single or will the couple reunite?

Have you got news for Waterford Live? Contact news@waterfordlive.ie.