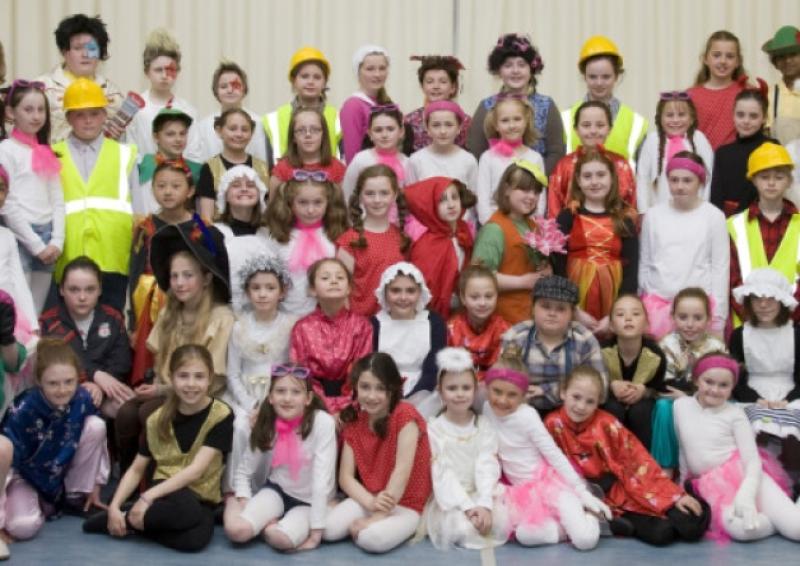 Congratulations to the young pupils in third and fourth class at St. John the Baptist Girls School on their recent All-Ireland Victory in the Cumann Scoildrámaíochta Inter-Schools Musical-Drama Competition.

Congratulations to the young pupils in third and fourth class at St. John the Baptist Girls School on their recent All-Ireland Victory in the Cumann Scoildrámaíochta Inter-Schools Musical-Drama Competition.

Their inspiring Irish show was called “Is Féidir Linn” and it received a resounding “yes” vote on April 18 in the Ionad Ealaine in Mullingar, where the All-Ireland Finals were held over a week long period.

The girls’ show centres around two characters - Neili and Peigi - who are fed up with the sense of hopelessness and despair reflected in the news and general media. They seek to find examples of how we can overcome this doom and gloom from movies, entertainers and personalities both from the past and from the present.

With songs (translated into Irish) from much loved movies and musicals as diverse as ‘The King and I,’ ‘Shrek,’ ‘Oklahoma,’ ‘Annie’ and personal appearances by none other than Elvis, Bob the Builder and our very own Jedward, Peigi and Neili soon come to realise that anything is possible with a little effort and self-belief.

Modern-day issues such as peer pressure and the environment are explored and the show finally culminates in special guest appearances by Barack Obama and Katie Taylor, who epitomise the very essence of the phrase the American president coined on his recent visit to Ireland - “Is Féidir Linn”.

The road to glory for the girls began in the chilly early spring days, on February 6, with a show in Fermoy. From there they continued to the Munster Final in Ennis on March 20, where the girls put on a magnificent display, which guaranteed them a place in the All-Ireland in Mullingar.

When they got to Mullingar they pulled out all the stops - singing and dancing their hearts out. They were outstanding! They were unstoppable! They owned that stage and with true spirit and character they put on the performance of a lifetime.

Their hard work and dedication was richly rewarded when they later received the news they had been waiting for. Yes! They had won an All-Ireland Trophy.

The success is even more marked in that this is the third time the school has staged a show so good it took home the All Ireland Trophy!

Thanks goes to all the teachers and secretarial staff of the school for all their help in the choreography, costumes and everything involved with putting on the show.

Thanks also to the parents, especially to those who supported the girls in Ennis and Mullingar.

If you wish to see “Is Feidir Linn” on stage for yourself the girls will be performing one last time in the Halla na Féile Variety Show this Friday, June 7.