Life isn’t all about working ‘9 to 5’ and for the cast of Tipperary Musical Society; this year’s production saw them step aside from their regular ‘9 to 5s’ to thread the boards in Dolly Parton’s ‘9 to 5: The Musical’.  Following on from last year’s epic performance of ‘Evita’, ‘9 to 5; The Musical’ was certainly a completely different show choice and highlights the versatility of this society.

The audience were immediately taken back to 1979, with this high-energy show captivating their full attention from the off with the infamous opening number of ‘9 to 5’.  We are introduced to the three female leads Violet (Caroline Brahan), the working mother to son Josh (Richie Crowe), followed by sultry country girl Doralee (Siobhán Dempsey) and her husband Dwayne (John Ryan), then finally to Judy (Deirdre Ryan) the ‘new girl’ at Consolidated Industries.  This trio are a force to be reckoned with as they form an unlike friendship and devise a plan to get even with their ‘sexist, egotistical, lying, hypocritical bigot’ aka their boss Mr. Hart played to aplomb by Willie Bun.  To quote Dolly, “9 to 5: The Musical is perfect for anyone that’s ever wanted to string up their boss, which is almost all of us.”

As much of this show pivots around the office, set design was paramount and credit has to be given for the use of props adding to the retro 1970’s vibe and the cast immersed themselves in this era paying careful attention to detail with their costumes, hair and make-up.  As the story unfolds Violet takes Judy under her wing when her lack of office skills become apparent, as she has spent her entire adult life looking after her husband Dick (Jason Ryan) who has left her for a younger woman.  She also introduces her to the other women in the office, including the much misunderstood Doralee.  Of course Hart encompasses everything that keeps them over worked and underpaid as mere women in this male dominated workplace.  Along the way we meet Roz (Tracey Walsh) whose infatuation with Hart leads to hilarious moments as she declares in her love for him singing “Heart to Hart”.

The ensuing drama includes comical scenes in which the female trio get a little high and each fantasise their revenge on Hart with their individual musical numbers “Dance O’ Death”, “Cowgirl’s Revenge” and “Notion Potion”.  In a comedy of errors life imitates fantasy when Violet played to expert comic timing by the talented Caroline Brahan, accidentally puts rat poison in Mr. Hart’s coffee.  The following scenes where the female trio decide to take Hart hostage in his home are priceless.  With the boss ‘indisposed’ there’s new management and big changes at Consolidated Industries.  With the junior accountant Joe (Conor Ryan) Violet uncovers that Hart has been ‘cooking the books’ giving her the leverage she needs to blackmail Hart while also saving her, Doralee and Judy from the trouble they’re in.  All three ladies face down their biggest foe and find their happy endings. An encore of “Shine Like the Sun” ends this exceptional show on a high note. 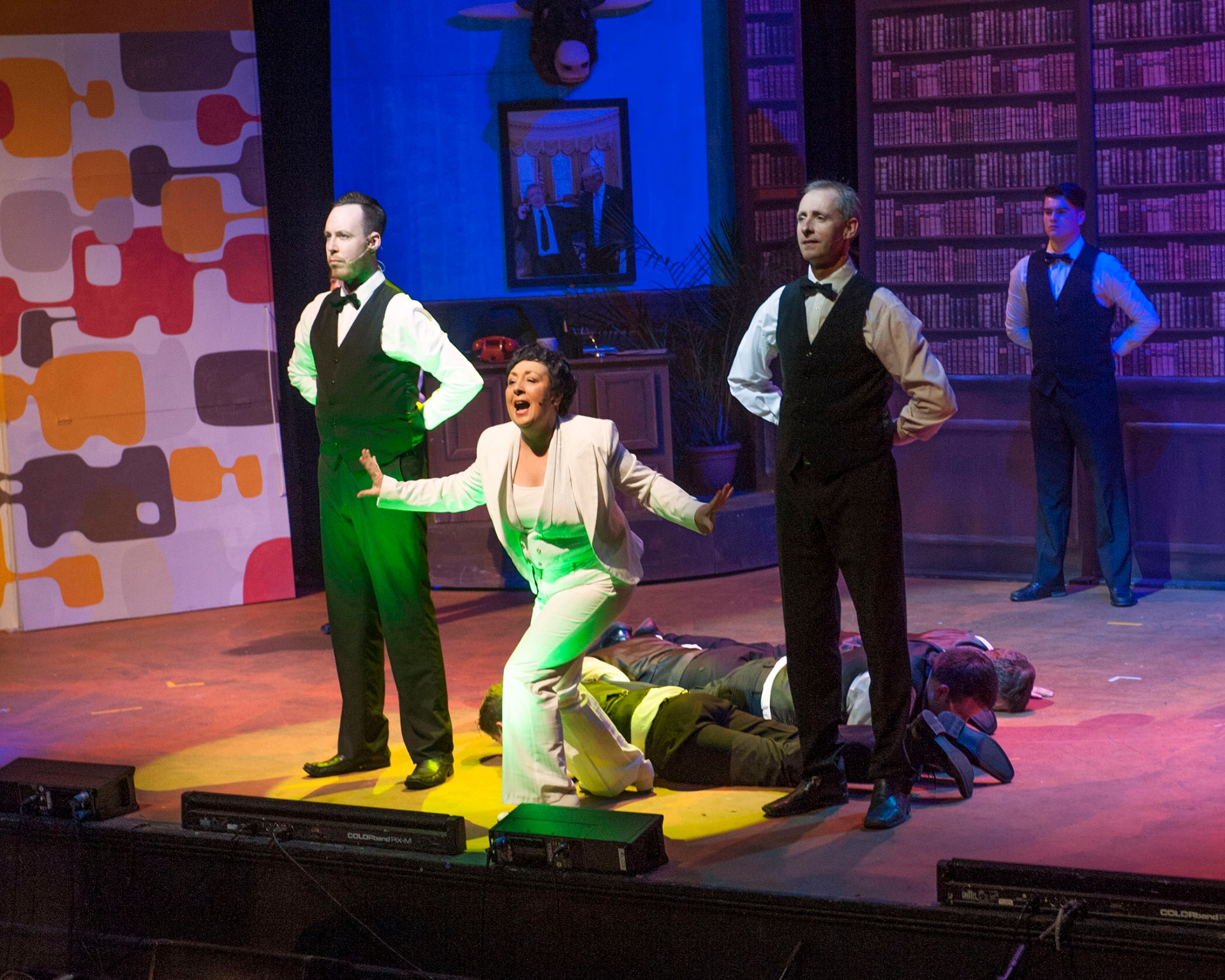 Yes a musical is about those big solos and chorus numbers but it is also so much more than that.  Musical numbers were choreographed to perfection and the cast made those dance routines look easy needless to say they are anything but.  Perhaps the months of rehearsals, fine tuning of each chorus number and endless dance practices pale in comparison to the cheers, applause and standing ovation from the audience who are perhaps both the best critics and greatest supporters.