Tipperary's premier comedy duo The 2 Johnnies return for their next adventure! 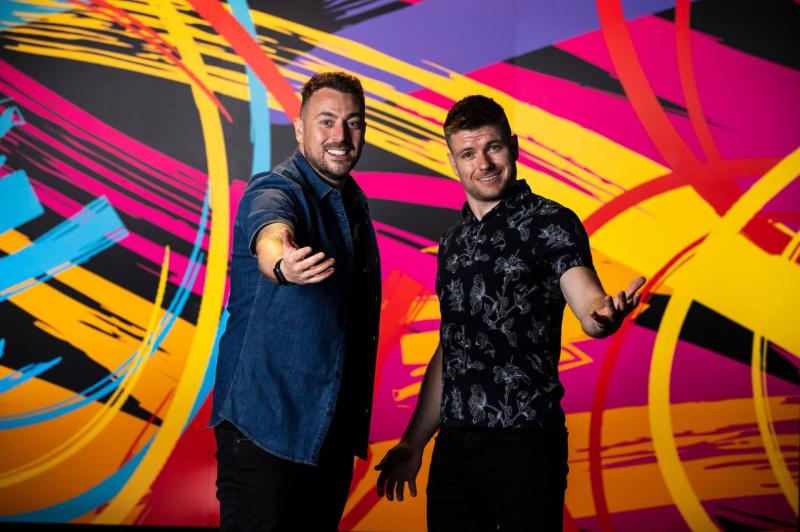 Tipperary's premier comedy duo The 2 Johnnies make their return to TV screens this autumn with a brand-new four-part series which will see them take on the worlds of Urban Art, TikTok, & Gaming and even see them try don the Green Jersey as they tackle some of the world’s most niche sports.

Starting on September 27 on RTÉ 2 at 9.30pm each week The 2 Johnnies  travel all over Ireland meeting experts, stars, and crazy characters, while taking on some big challenges for themselves, which sees them completely out of their depth and way out of their comfort zone!

The 2 Johnnies will explain and demystify each topic and the world it occupies, providing real insights for viewers at home by deconstructing the skills required to make it in this unfamiliar territory themselves.

In each episode, our intrepid duo immerse themselves in these unknown worlds, doing a deep dive, finding out what it takes to get to the top, taking instruction from the biggest names in the industry and challenging themselves to succeed in it, with the usual mayhem and laughter as we watch if they survive or thrive!

The 2 Johnnies take on TikTok:

In taking on TikTok, the lads meet with some of the top TikTokkers in Ireland like  Lauren Whelan whose TikToks have been viewed over 118 million times. They also learn some valuable TikTok tips from Dublin comedian Killian Sundermann. Killian’s bizarre interactions with hedges have amassed millions of views. Meanwhile, Matty the Viking from Wicklow has made a living from training and chopping wood in a nearby forest, prompting Johnny B to try his hand at chopping wood with the usual hilarious results.

They also meet experts in social media and try to discover the magic formula to ensure your TikTok goes viral. Armed with this knowledge, the lads set out to become TikTok famous, with the aim of getting a million views whilst raising funds for their local GAA club.  To do this they need to be able to dance - which they can’t - so who better to call upon than professional dancer Karen Byrne of Dancing With The Stars fame to help them out for their big TikTok takeover...?

The 2 Johnnies take on Urban Art:

This episode on Urban Art stems from the 2 Johnnies meeting with Peter Tunney, who runs the Wynwood Walls project in Miami, who appeared on their show The 2 Johnnies Take on America last year. Inspired by his art, the lads wonder if they could help create a special mural in their native Tipperary, and so ensues a whirlwind tour of Ireland where they take inspiration from urban art festival Waterford Walls who specialise in large scale street art, take a lesson from childhood legend Don Conroy, meet some final year art students and put on their very first Art Exhibition!

Can they use all they have learned to paint a mural? A plan is hatched to take a blank wall in Clonmel and transform it into something special. Hon Art!

The 2 Johnnies take on the Green Jersey:

Who knew bog snorkelling was an international sport or that Tug-of-War was once an Olympic team event? In this episode, the 2 Johnnies want to don the green jersey for Ireland but first they need a sport to represent the country. And in true 2 Johnnies shtyle, they won’t be taking the most well-trodden route. First up it’s a cricket lesson from Irish International legend Kevin O’Brien. The lads then head off-piste to Kilternan, where they get to grips with the ski slopes.

Over the course of this episode, they also try their hand at clay pigeon shooting and find themselves in uncharted waters at the National Aquatic Centre but will  they take the plunge off a 10-metre diving board? Fiinally the lads are taken on by a Cork American football team and manage to make the trials for the Irish Wolfhounds… will they make the cut?

The 2 Johnnies take on E-Gaming

Gaming and e-sports are growing at a tremendous rate with gaming now an entertainment phenomenon grossing more than the biggest movies and consuming more leisure time from the average household than Netflix, while e-sports are on track to soon rival the biggest sports of today - but to people who don’t play, this is an impenetrable world of nerds and goblins.

In this episode, the lads want to find out more about this ever-evolving subculture of competitive gaming and e-sports. They meet top gamers, streamers and Twitchers, as well as the Munster Rugby e-sports team, play FIFA with the FAI and compete in an e-sports tournament, rounding up some hurling legends to help them on their way. The lads then try to further assimilate into the gaming world, designing and attempting to sell their own game, “Grand Theft Chicken Roll”. Will they succeed or will they go down faster than Mario at FIFA ‘21? Grab your controller, tune in and find out!

The 2 Johnnies Take On… is produced By Straywave Media for RTÉ Television and directed by Jason Butler. Created and developed in collaboration with The 2 Johnnies and CWB Management.