A big thank you to all who provided stewarding, catering and support on the day 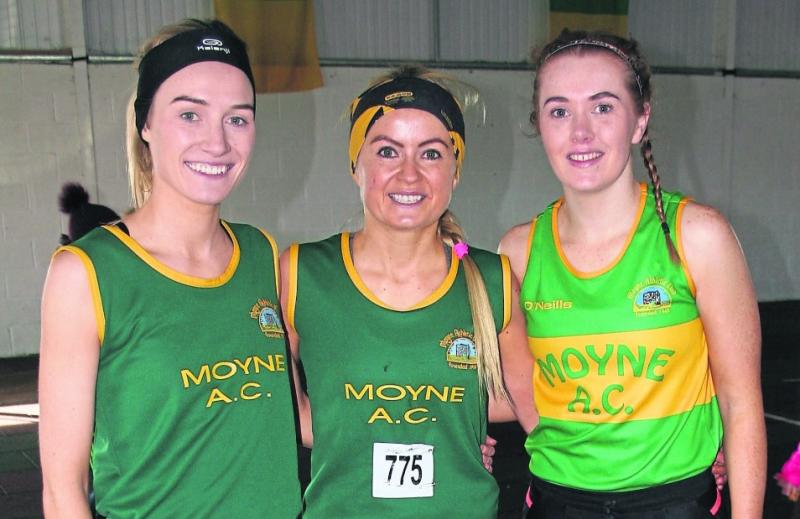 County Novice Road Championships
The county Novice road championship was held in Moyne again this year. This year saw the smallest number of Moyne athletes compete, but it was certainly quality over quantity, with our Novice women finishing in 2nd position in the team event.
The first event of the day was the ladies 3k where there was a field of 29 athletes. Moyne AC had three athletes toe the line: Angela Fogarty, Louise Fogarty and Sharon Cantwell. Angela was our first lady home with a gutsy performance to finish 4th overall in a time of 11:26. Louise finished closely in 6th position in a time of 11:37. Sharon Cantwell finished in 15th position with a massive PB of 12:35. The ladies’ performance rewarded them with a silver team medal overall.
The men had a 6k course to complete and we had two athletes compete among a field of 56 competitors. Brian Carroll and Thomas Percy were 32nd and 50th respectively. Brian ran a time of 23.32 and Thomas 26:15
The day would not have been a success without the generous support of our club members and volunteers. A big thank you to all who provided stewarding, catering and support on the day.

Munster U/9-U/11 Indoor Track & Field Championships
The Munster Indoor Championships took place recently in the Nenagh Indoor Stadium. Our four young athletes did very well in what was a massive competition and quality athletes in action. Eleanor Doyle competed in the Girls U/11 60mts and Long Jump. She ran in the sixth of nine heats in the 60mts finishing 6th in a time of 10.61 with the top two from her heat advancing to the final such was the calibre of athlete she faced. In the Long Jump she finished 47th with a leap of 2.63mts. Approx. 50 athletes competed in the Girls U/11 600 with Ruth Phelan running in Heat 3 of five heats, finishing 7th overall in 2.17.62. She faced over 65 athletes in the Long Jump to finish 30th with a leap of 2.98mts. Billy Gleeson competed in the Boys U/11 600mts and with over 36 athletes in action he was in Heat 3 of 4 where he posted a time of 2.11.90 to finish 7th overall. Our final athlete in action was Ciara Joyce who competed in the U/10 500mts and Long Jump. Again, huge numbers took part with over 35 running the 500mts. Ciara finished 3rd in her heat in 1.49.79 and had to wait for the overall results to see if a medal was forthcoming but such was the strength in dept of this competition that she finished 9th overall. 41 athletes competed in the Long Jump with Ciara 22nd with a jump of 2.83mts. Well done to all four athletes on their achievements in this red-hot of competition.

Munster Masters Indoor Track & Field Championships
Two Championship Best Performances, 15 individual medals and 3 sets of team relay medals plus several personal best times were the order of the day at the recent Munster Master Indoor Track & Field Championships. 13 athletes competed individually and as part of the club relay teams but both Ber Spillane (W35 400mts) and Liz Power (W55 60mts) rose above the rest as they set new Munster records in their respective events with victory in 1.09.65 and 11.13 respectively. Indeed, it was Ber’s own club mates Kate Harrison and Siobhan Power who drove her to this record as they finished 2nd and 3rd in times of 1.09.86 and 1.10.07 which was also a personal best for Siobhan. Ber also collected a bronze medal in the W35 60mts in 9.36 which was also a pb for her while finishing fourth in the W35 200mts in 31.49. Liz added the W55 200mts title to her haul, winning it in a new pb time of 38.80 while also securing the silver medal in the W55 400mts in 1.36.13. Kate Harrison also added another silver medal to her collection when finishing 2nd in the W35 200mts in 30.83. Siobhan Power, in her first outing at this level, showed her potential by adding a silver medal in the W35 60mts (9.35) and a bronze medal in the W35 200mts (31.11) to her bronze in the W35 400mts mentioned above and again recorded personal best times in each of the events. Sinead Tynan and Edel Delaney added further to the club’s success with Munster titles in the W45 200mts (34.99 and a pb) and W35 1,500mts (6.01.71) respectively with Sinead also winning two silver medals in the W45 60mts (10.69) and 400mts (1.15.97) which was another pb for her. Our final individual medallist was Brigid Gleeson who finished 2nd in the W45 800mts in 2.51.50. When it came to the relay teams the above athletes were joined by Patricia Ryan, Angela Brennan and Ann Ryan to form two teams at W35 level. The team of Brigid Gleeson, Siobhan Power, Ber Spillane and Kate Harrison clocked 2.10.05 in their heat to win the Munster title while the team of Patricia Ryan, Sinead Tynan, Angela Brennan and Ann Ryan finished 2nd in their heat in 2.20.76 which saw them clinch the Munster bronze medals.
Brendan Delaney, TJ Gleeson, Tom Percy and Ray Power competed in the Mens competition and while individual honours did not come their way, they gave a great display of team running in the M35 relay to finish third overall in a time of 2.00.15 and Munster bronze medals. Considering for Brendan, TJ and Tom it was their first ever track competition so to produce this performance was a very creditable achievement. Individual wise Brendan finished 5th in the M40 400mts (1.04.47) and 6th in the 200mts (29.07). TJ was 5th in the M45 60mts (9.35) while Ray finished 4th in both the M55 400mts (1.10.06) and 200mts (30.90) and fifth in the 60tms (9.65)
Congratulations to all our master athletes for their outstanding performances and they now look forward to the National Championships in Athlone on 10th March.

Munster Senior & Junior Indoor Track & Field Championships
Seven individual medals and one set of relay medals were won by our junior and senior athletes in Nenagh two weeks ago with athletes also achieving personal bests over various distances. Three athletes were crowned Munster Champions with Louise Fogarty winning the Senior Ladies 400mts in a new personal best of 1.07.50, Lorraine Healy the Senior 800mts in 2.35.46 and Dylan McLoughlin the Junior 800mts in 2.06.33 which was a massive improvement on his previous time. Louise also claimed the silver medal in the Senior Ladies 800mts with Dylan doing likewise in the Junior 1,500mts in 4.33.00 with yet another personal best performance. Jack Hickey also collected an individual silver medal when finishing second in the 400mts in 55.88 while Sharon Cantwell achieved a personal best in the Senior Ladies 1,500mts with a time of 5.33 which also saw her win an individual silver medal. Katie Bergin and Aisling O’Dwyer gave away several years to their more seasoned campaigners at Junior level, but both did exceptionally well. Katie finished 5th in both the 60mts in 8.54 and the 200mts in 27.70 while Aisling recorded two personal best time when finished 9th in the 60mts (8.91) and 10th in the 200mts (28.85). Sean Burke is no stranger to this level of competition and came through for 5th in the 400mts (58.67) which is a personal best time for him and 9th in the 200mts (25.77). Jack Hickey also competed in the 200mts posting a time of 24.98 to finish 7th overall. The relay always generates great excitement and with Katie and Aisling joined by Emma Gleeson and Louise Hickey to make up the Senior team they gave it their all and a fantastic last 200mts leg by Katie saw the girls snatch victory and be crowned Munster champions in a great time of 1.56.83. These were fantastic performances from all our junior and senior athletes and great credit is due to them on their dedication and commitment.

The club would like to sincerely thank Michael Hyland, Proprietor of Hyland’s, Careplus Pharmacy, Templemore for donating a first aid kit to the club.

Anniversary Games
The club are hosting our Anniversary Games again this year. This is a track & field evening meeting and will be run on Wednesday 10th July at 6.30pm. All interested please get in contact with the club by e-mail at hello@moyneathleticclub.com or contacting Martin on 087- 2681524 or John on 086-8403515. Keep an eye to our website and Facebook page for updates.