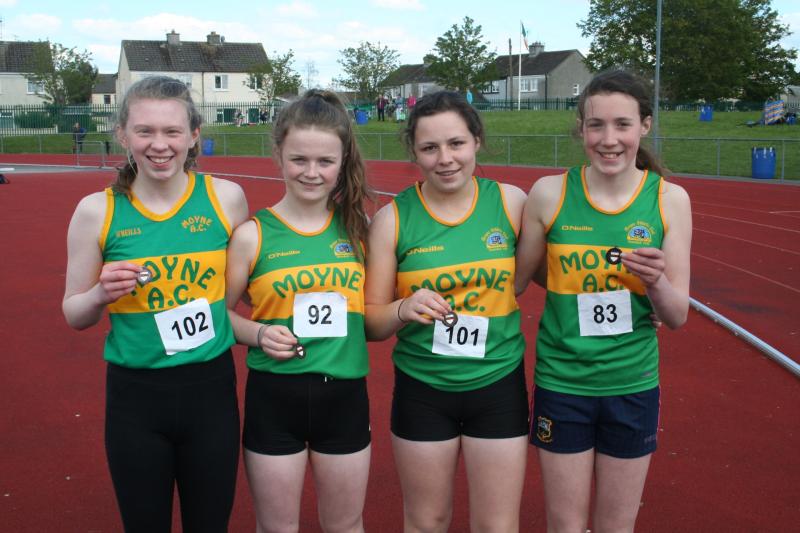 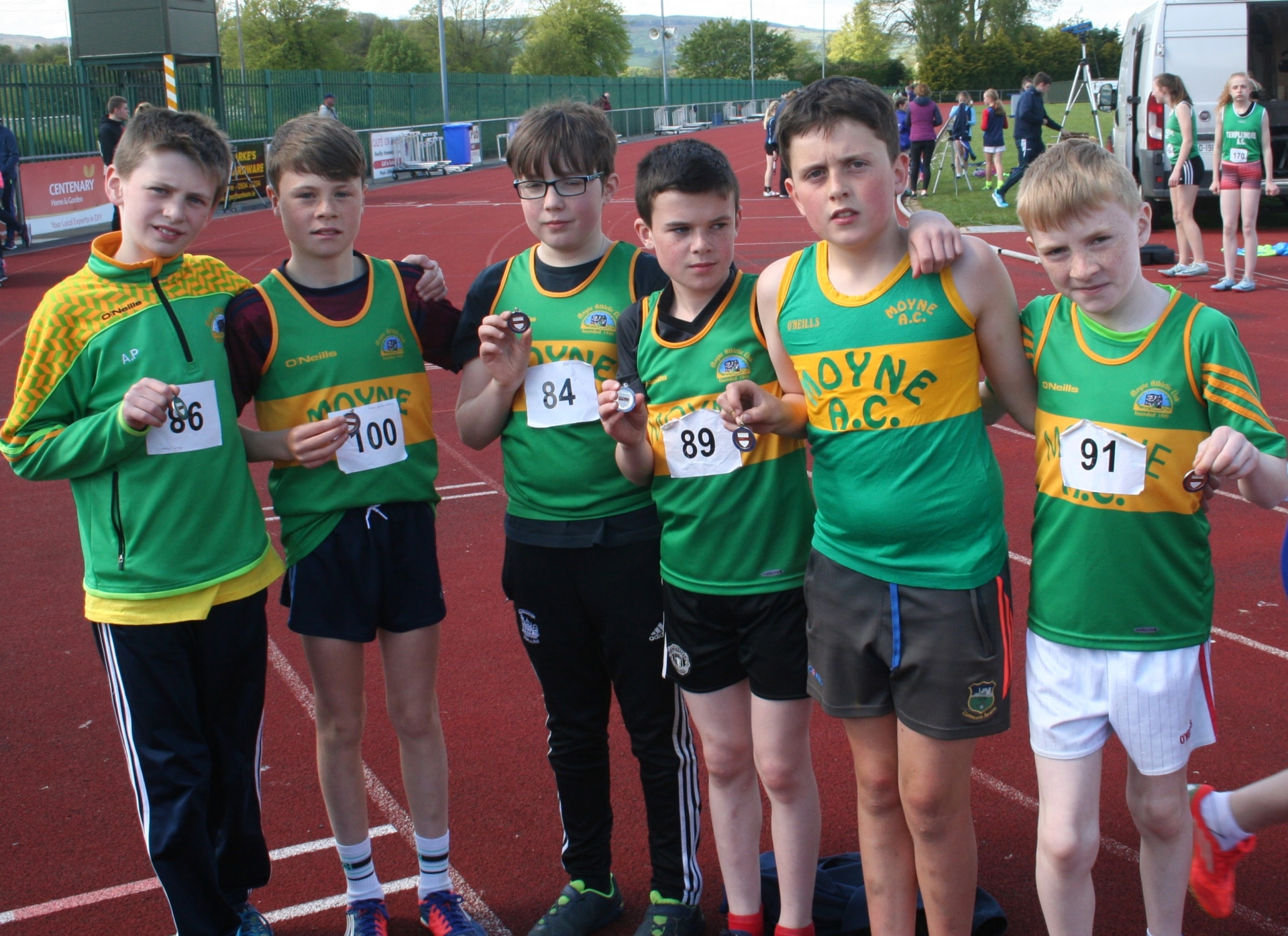 Templemore was the venue for the county track and field championships that took place on May 11 and 12.

Day 1 saw the U13-U19 athletes compete in sunshine with a stiff breeze at times but otherwise dry conditions. There were 22 athletes representing the club where a total of 19 individual and 2 sets of relay medals were won.

The U13 Boys relay team of Jack Flanagan, Frank Doyle, Jack Gleeson and Adam Spillane Leane (subs Adam Phelan and Paddy Cussen) ran the 4x100m where they finished in 2nd place. The U16 relay team of Tara Gleeson, Louise Hickey, Mary Cussen and Leona Maher sprinted to 4th place. Our third relay team in action were the U18 Girls where they dashed around the track! Well done to Aisling Dwyer, Katie Bergin, Jessie Newman and Rachel Butler who finished 1st in a time of 53.69!

Day 2 saw the U/9 to U/12 athletes compete on what was a very warm sunny day. The club had a successful day with 7 individual medals – 2 silver and 5 bronze in addition to 2 sets of bronze relay medals.

Billy Flanagan was one of the bronze medal winners finishing 3rd in the U9 300m. JP Everard crossed the finish line in 3rd place in the U10 60m with a time of 9.88. Billy Gleeson also finished 3rd in his U11 600m race finishing in 1.55.99. The next bronze medal went to Molly Jones who came 3rd in the U9 Turbo Javelin with a throw of 6.76. Olive Spillane Leane took 3rd in the U10 Long Jump with a jump of 3.28. The final two individual medals both went to Sarah McGinley. Sarah finished 2nd in the U12 Turbo Javelin with a throw of 12.97 and 2nd in the U12 Shot Put(2kg). The U9 and U11 boys both finished 3rd in their relays. The U9 team was Michael Doyle, William Morrissey, Billy Flanagan and Conor Leahy while the U11 team was Billy Gleeson, Jack Guilfoyle, Rógan Lyons and JP Everard.

Well done to all medal winners and to everyone who competed on the day, it was the first time for some of the athletes to compete and take part. Keep up the training and success will come your way!

A sincere thanks to all the parents for their support over the two days and to all those who gave a helping hand with the athletes. With our coaches and officers providing officialdom at the event it is great to know that the athletes will be looked after and pointed in the direction of their various events.

This event had to be postponed from a few weeks back but will now take place this Friday night May 17 commencing at 6.30pm. All athletes from U/6 to U/15 are asked to be at the track by 6.15pm at the latest. Competing against the club are the athletes from Moycarkey-Coolcroo, Coolquill and Moyglass. This is a team event rather than an individual event with all athletes earning points for their respective clubs. All participants will receive a medal while the most successful club will win the “John Flynn” Perpetual Trophy. With over 100 athletes expected on the night all help would be appreciated and donations of confectionary would be very welcome as refreshments will be served to all after the event.

Dylan McLoughlin, Aaron McLoughlin and Jack Hickey, representing CBS Thurles, competed in the East Munster Schools Track & Field Championship in Waterford last week with some tremendous results. Dylan finished first in the Senior 800mts in 2.07.39, Aaron second in the junior walk in 6.56.97 and Jack first in the Senior 200mts in 24.92and fourth in the Senior 400mts. Dylan and Jack were also members of the CBS 4 x 400mts relay team that set a new East Munster record for the event with a time of 3.44.67.

The very best of luck to all our club representatives at the Munster Schools Track & Field Championships being held in the CIT, Cork this Saturday May 18 - Dylan McLoughlin, Aaron McLoughlin, Jack Hickey, Katie Bergin, Leona Maher and Louise Hickey.

The weeks are pressing on and Monday June 3 is just a few weeks away now. Our 10k Run and 5k Run/Walk will commence at 12 noon on that day. Entry fee is €15 for the 10k and €10 for the 5k. Both events will be timed by our own club officials. Prize money on offer will be as follows – 10k – 1st €100, 2nd €50, 3rd €30. 5k – 1st €50, 2nd €30, 3rd €20. Bonus of €50 for breaking course record over 10k. Medallions will be presented to all finishers with all over 16 very welcome to participate and to then enjoy the refreshments provided afterwards. We have had some great racing over the years and this year should provide much of the same again. Keep the date in mind.

Another night of track & field competition, being presented by the club, is the 2019 Games. Preparations are ongoing and interest is gathering for the event. Flyers have been making the rounds of the clubs around the Country and if feedback is anything to go by, we should once again have a great night of athletics on the cards. Our two main headline races will be an attempt on the sub 4-minute mile for the men and sub 2.05-minute 800mts for ladies which were very nearly reached last year. The programme also consists of 200mts and 400mts with additional mile and 800mts races along with long jump and weight for distance. Entries have been submitted for some of these races and once the required numbers have been reached, we will be unable to accept further entries so don’t lose out. Contact Martin on 087-2681524 or John on 086-8403515 or e-mail hello@moyneathleticclub.com for further details.