On Wednesday, July 10, at Moyne Sportsfield 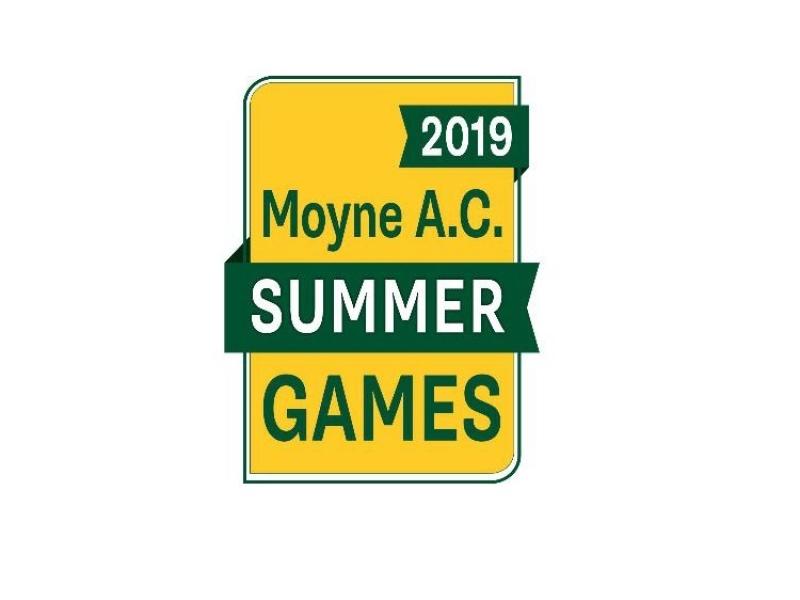 On Wednesday, July 10, at Moyne Sportsfield

On this Wednesday night, July 10, Moyne AC will run their 2019 Summer Games and this year’s event is shaping up to be one of the best track and field competitions around. The event is only in its infancy, as the club, following a huge investment in their facilities at Moyne Sportsfield, ran their 70th Anniversary Games on the brand-new track last year. Several of the athletes who competed then are unavoidably absent this year as they are currently representing Ireland on the European stage, but while they will be solely missed, the club have enticed a host of outstanding athletes to take part this year and included in the many notable athletes on show will be two world record holders.

Geraldine Finnegan, North East Runners has been one of Ireland’s most prolific athletes and has certainly made her mark on the world stage. She has numerous Irish and European titles and has held 16 world titles and has been/is Irish record holder in eight various disciplines. In 2018 she set a new world record in the W50 decathlon with 7,250 points and she is also the world record holder in tetra decathlon indoor and outdoor in both 2017 and 2018 and was named most improved athlete in the world in 2016. Geraldine competes in the Master ladies 400mts and her best time as an W50 is 66.4 having previously had times of 59.79 as a senior and 59.49 as a W35 master. One of Geraldine’s motto’s is “never give up hoping, wishing, dreaming”.

Shane Healy of Metro-St. Brigid’s Athletic Club qualified to represent Ireland in the 1,500mts at the 1996 Olympic Games in Atlanta bowing out at the semi-final stage, a remarkable achievement for someone who only took up athletics in his early 20’s and who has overcome a lot of adversity in his life. He has set multiple Irish records from 800mts to 5k following his decision a couple of year’s ago to relaunch his career in the M50 category. Amongst the many accolades he holds is a World Masters Bronze medal for the 8k cross country event and in April of this year set a new world record in the M50 1,500mts indoors of 4.05. He also broke a 20-year-old record in the mile in June when recording 4.22.96 in Nashville to finish second behind Brad Barton of the USA in 4.19.59. The previous record was 4.25.04. He is also only the second man to run under four minutes for the 1,500mts at 50 years of age just missing out on the world record of David Heath by .8 of a second at an Irish Milers meet in Belfast also in June recording a time of 3.59.17 – 3.58.26 is the record. His advice to people "If you have a dream and you have a talent - don't let it go to waste. Get out there and chase your dreams and never give up”. Shane competes in the Men’s “A” Mile.

Both mile events for the men are shaping up to be something to saviour with Shane, Kevin Kelly, St. Cocoa’s, Dara Fitzgibbon, Donore Harriers and Rory Chesser, Ennis Track amongst others all vying to be the first man to break the four-minute mile barrier in Tipperary. A big entry in the “B” mile sees Kevin Coleman, Thurles Crokes returning to defend his title from last year but with athletes from Cork and Laois also entered he may not have it all his own way. Another top-class event is the Senior Men’s 400mts where Robert Bennett, Nenagh Olympic returns to defend his title but with the possibility of two heats in this event the pace will be hot.

The ladies 800mts sees Iseult O’Donnell of Raheny Shamrocks and Annette Quaid, Leevale go head to head with Emer Lynch, Newport and Margaret Mary Grace, Nenagh Olympic battle it out in the 200mts and 400mts while Jacqueline Hughes, Thurles Crokes is an entrant in the lady’s mile.

A new event this year is the 4 x 100mts relay and with teams from Moyne, Templemore and Carrick-on-Suir with the possibility of a couple of others’ this should provide lots of excitement for the spectators. Juvenile races begin the programme at 6.30pm and for the following two hours there will be non-top action. Spectator entry is free, the weather is looking good so why not come along and support the club and the quality racing that the athletes are sure to provide.