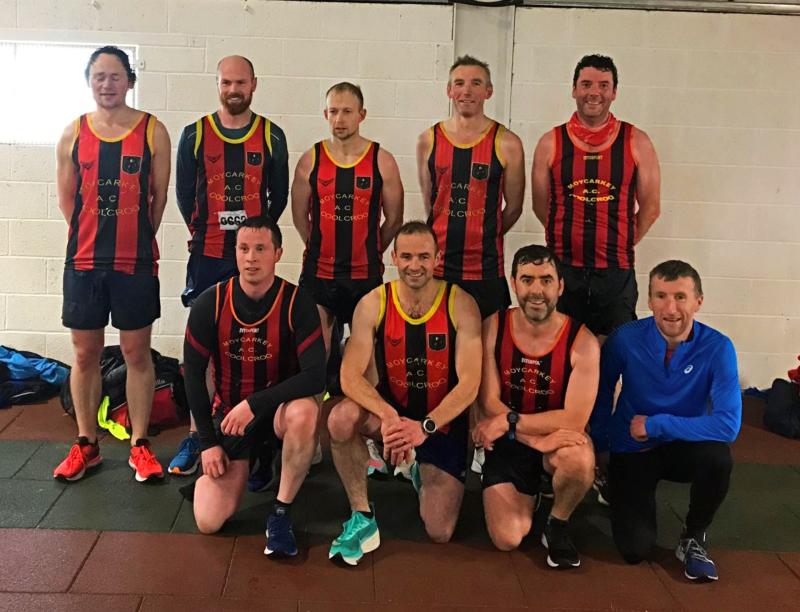 Saturday & Sunday were once again dominated by Munster Indoor athletics, and it was great to see the club involved again. What a fantastic day it was on Saturday for Leona Maher who produced her best performance of the season in the final of the U/19 200mts to smash her pb when clocking 27.99 secs to finish third and secure her first individual medal at this level of competition.

Leona had earlier finished 2nd in her heat in 28.46 secs to qualify. Also competing in the U/19 200mts was Lucy Doyle who has made a big commitment to athletics this year and this is paying off with a great performance in her heat to finish 3rd in 31.59 secs and though not enough to get through to the final she nonetheless gave it her all.

Her commitment will no doubt bear fruit later in the track season. Both Leona and Lucy returned to Nenagh on Sunday to compete in the 60mts and again produced the goods with Leona 6th in 8.46 secs and Lucy 8th in 9.57 secs in the final of the U/19 event. Well done girls on two great performances.

In the Girls U/13 Long Jump, Olive Spillane-Leane was amongst the 30 athletes taking part and what an effort she put in. After three jumps she was lying in 8th place and thereby qualified for the final where she had the opportunity of another three jumps. She consolidated her position in the final with a best performance of 3.55mts over the six jumps. Olive returned on Sunday to take part in the 60mts, finishing 7th in Heat 2 in 9.82 secs in what turned out to be the quickest heat of the competition. Well done Olive on two great performances.

Competing at this level of competition for the first time was Gerard Delaney who put in a great performance in the Boys U/12 Shot. Though a novice at this event he showed plenty of talent, qualifying through to the final and securing 6th place with a throw of 7.12. What a return from your first competition.

He had earlier taken part in the 60mts where a massive 33 athletes took part finishing 7th in Heat 2 in 10.19secs. Plenty of talent in this young man. Another Shot competitor was Maria Doyle who competed in the U/13 event and again produced a great performance to finish in 4th place with a best throw of 7.55mts from her six attempts, again reaching the final for an additional three throws. In other years this would have qualified her for the national Indoor Championships, but Covid 19 has reduced the qualifiers to three. Hard luck Maria.

Three more days of Munster Indoor competitions are coming up with the Juvenile Relays and U/16-19 1,500mts and U/17-19 400mts taking place on 5th March and the U/9 to U/11 Championships on 26th/27th March. In between those is the County Juvenile and Junior Indoors on March 12.
Those who are anticipating entering these competitions please ensure that you have contacted our competition secretary Ber Spillane well in advance of the closing dates.

County Novice Road Championships
The road season doesn’t be long coming around and as per custom the first road race of 2022 was the County Novice Championship hosted by the Club. It’s been a long while since athletes were subject to such horrific conditions, times were irrelevant today as this was a test of attrition, of guts and coverage for all athletes who raced through the driving wind and rain.

It was wonderful to see the home club field teams in both the ladies 3k and men’s 6k event. Our starter Niall O’ Sullivan didn’t delay in getting the fields underway. The ladies faced the mile long headwind and diving rain from the gun and as the race unfolded it was all to play for the runner up spots. With about 400m to go it looked like Orla Healy was going to finish in 5th place but once she hit the track she closed like a train and got up to clinch the bronze medal on the line with nothing between her and 4th place. What an exciting finish and brilliant gutsy performance from Orla.

Next in the gate for the host club was Lisa Quinlan in 6th place, Edel Delaney followed suit in 10th position and then Aisling Maher in 17th who ran cautiously today as she is nursing an injury. The 4 girls put in great efforts and were awarded with an excellent 2nd place finish in the team competition behind Clonmel. Well done girls!

Unfortunately, the weather started to deteriorate even worse for the men’s race. Here Moyne had a band of 7 athletes face the starter among a field of 72 competitors. Stephen Flanagan (9th), Brian Carroll (24th), Jody Sweeney (36th), Pakie Bowe (37th), Brendan Delaney (50th), Pierce Harte (57th) and Louis Everard (69th) all did themselves and the club very proud on possibly the worse conditions a runner could face. Their performances show real character and will be used in the building blocks for better things to come for the men throughout the season! They finished in 8th position in the team event.

Massive thank you to all the supporters who came out today, you all added to a damp, but great atmosphere and it really made a difference to the athletes. Thanks to our reliable officials who kept the show on the road and the Order of Malta.

Next road competition is the Munster Senior, Master and Novice 4 Mile Road Championships on the 6th of March, in Quilty, Co. Clare and the Co. Intermediate Championship’s will be hosted by Carrick on Suir AC on the 13th of March. Entries for both events should be given to Ber Spillane, competitions secretary in good time. It’s envisaged that we will have athletes represent the club at both these events if possible. Onwards and Upwards.

Irish Life National Indoor Championships
The blue riband of senior indoor athletics, the National Championships, take place in the Indoor Arena in Abbotstown, Dublin on Saturday and Sunday next with a host of top Irish athletes taking part, many hoping to secure entry to the World Indoors in Belgrade on 18-20th March.

Amongst the entries is our own Katie Bergin who competes in the 60mts and 200mts and will relish the chance to compete with many of our international stars. Katie will also be a member of the 4 x 200mts club relay team, joined by Leona Maher, Lucy Doyle, and Aisling Dwyer as they too will relish the prospect of competing in such illustrious surrounding and we wish all the athletes the very best of luck.

Split the Bucket!
The winner of the Split the Bucket for Friday 18th February was Gerard Ely, Garrenroe. Winning amount €114. On-line options are available on our website www.moyneathleticclub.com and tickets can also be purchased in Quinlan’s, Moyne or at any training session. Thanks to all who continue to support each week