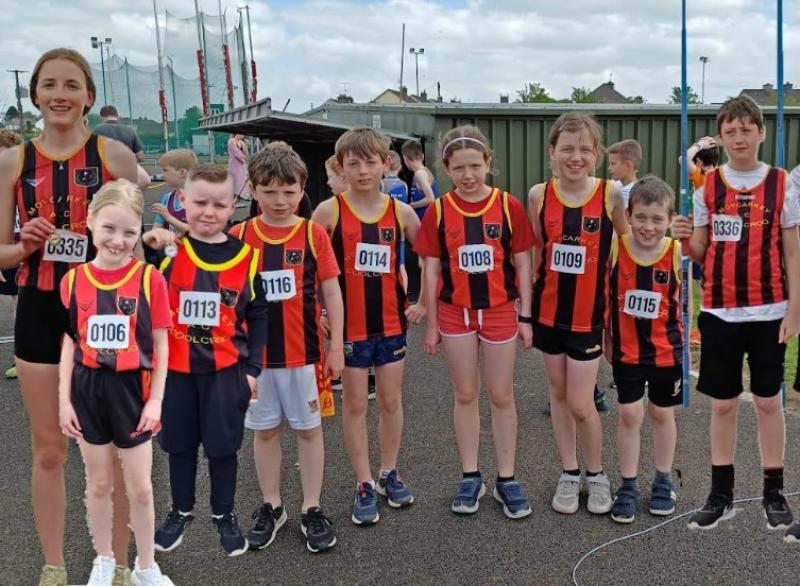 In the Boys 500m Taghg Nolan had a steady run in 10th place and in the final race to feature we had the Girls U9s 300m race where Amelie Fogarty ran well for 6th place in a time of 1min3seconds & Clodagh Ryan also running well for 9th place in 1min&11secs. In the 600m races we had good running from Grace RyanU11s in 15th, and good running from Mary Cummins & Lauren Franks U12s in 19th & 20th.

In the Field events In the Girls U12s High Jump we had a double medal win for the club with Lauren Franks winning silver with a jump of 1.02metres & Mary Cummins winning bronze with a clearance of 0.90m Well done Girls. In the Boys U9s Turbo Javelin Jody Morris have a very good throw of 11.16m to win the Silver medal.

In the Boys U10s Turbo Javelin Brendan Cummins had a good throw of 9metres for 7th place with Ryan Franks also throwing well in 15th with a distance of 5metres. Onto Day 2 now on Sunday May 15th Eimear Fogarty was first to compete in the Girls U13s 600m race running well for 10th place in a time of 2mins&24seconds., her older sister Aoibheann Fogarty competed in the Girls U17-U19s 800metres and here Aoibheann came away with the victory with a very good run in 2mins&43seconds.

In the field events, Jamie Connor competed in the Boys U13 moving up from the Turbo to using the full-length Javelin Jamie did very well to win the Bronze medal with a throw of 21.36meters to round off a great weekend for the club Well done to all.

Bronze for Sean @ 'Big Ten':
Bronze medal for Sean Mockler in the Hammer Throw @ 'The Big 10'Track Meet in Minneapolis, Minnesota on Friday the 13th with a good throw of 68.64m, The Big 10 is one of the more notable events in the Athletics Calendar in America, Well done Sean.

Conor makes debut run:
Conor Keating made his official debut in the Moycarkey Coolcroo AC singlet last Wednesday, May 11th @ the Dublin Graded meet in the 5,000metres in 9th place & running a track PB of 16:46 Well done Conor.Horse&Jockey Fun Run: Well done to Mossy Bracken and Paddy Cummins who took part in this 6km community run in the Horse & Jockey last Sunday May 15th.
Track Development Fund: The club has set up a fundraising page to help us develop an Olympic standard track by the year 2027 any donation no matter how small will be very greatly appreciated you can donate online at  idonate.ie/fundraiser/ MCACTRACK2027.