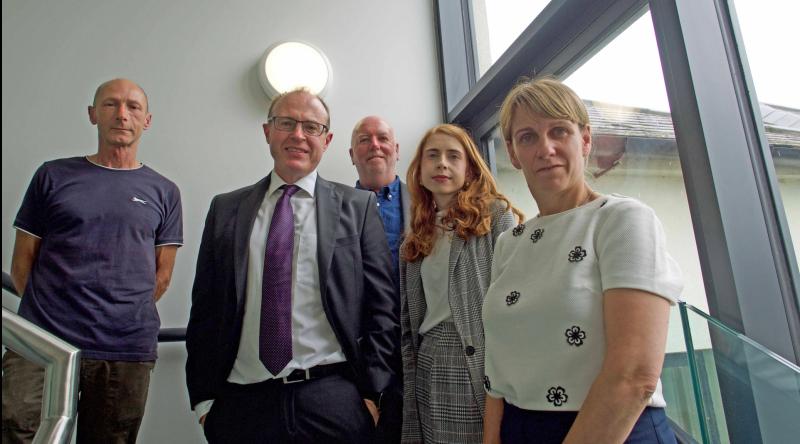 Tours were given of the Hub’s state-of-the-art office spaces at the Town Hall and at the Stable Lane Enterprise Town House close by on 23 New Street. A professional photographer was on hand to take portraits of attendees for use on their website, LinkedIn profile or other social media platforms.

Stable Lane Digital Hub CEO Aisling O’Connor told the attendees at the lunchtime event that when the hub opened its doors in September 2020, it gained a lot of traction very quickly because many people were forced to work from home or remotely due to the Covid-19 pandemic.

She paid tribute to Tipperary County Council for providing space on the top floor of Carrick-on-Suir Town Hall for the Hub, which has now expanded to the Stable Lane Enterprise Town House across the street providing between seven and eight offices in various sizes.

Ms O’Connor highlighted the new National Hubs Voucher Scheme funded under the Connected Hubs Network that has just been launched.

The scheme, which opened on Monday, June 27, allows each person to receive vouchers for three free days of use of a digital hub for work. The vouchers are valid until the end of August.

“This scheme allows anybody anywhere to avail of the free days in a co-working hub in the country,” she explained.

They wanted to attract new businesses and people to work in the town centre and pointed out the variety of businesses already based in the Hub ranging from an internet security firm to an engineering company.

He said it was fantastic to bring these workers into Carrick-on-Suir town centre and they wanted to ensure everyone knows about the National Hub Voucher Scheme. .

“If somebody is working in a factory in Waterford or Clonmel we want to let them know there is an option to do a few days here. We have high speed broadband.”

Carrick-on-Suir Tourism & Economic Development Committee (COSTEDC) spearheaded the creation of Stable Lane Digital Hub. It’s the first of 13 projects recommended in the Carrick-on-Suir Strategic Vision 2030 Plan, a blueprint for the economic development of the town COSTEDC published in 2016.

COSTEDC chairman Tony Musiol retraced the committee’s decade-long journey from the early days of holding workshops in 2013 to prepare the Carrick Strategic Vision Plan to publishing the plan. The plan’s recommendation to establish an enterprise hub in the town, evolved into a digital hub based on a project in Clonakilty.

Mr Musiol pointed out that Stable Lane Digital Hub had six clients when it first opened in September 2020 and now had 35 clients.

This was 35 people who come into the town centre to work and also spend, buying coffees, newspapers, other goods and services.

“Our vision for Stable Lane Digital Hub is not just to fill the desks; it is to provide a location where the creative drive of the people of this town and its hinterland will be encouraged to create new businesses, creating new jobs, further spin-off businesses and future prosperity and revenue in the town,” he explained.

Carrick-on-Suir Municipal District Administrator Marie O’Gorman said when COSTEDC kicked off its Carrick-on-Suir Strategic Vision – 2030 Plan it was a “no brainer” for the council to allow space for its proposed digital hub in the redesign of Carrick-on-Suir Town Hall.

She said when the council eventually got going with the revamp of the Town Hall, it was a great opportunity to support a project that “was being cried out for in the town”.

She said Tipperary County Council was more than happy to support the Stable Lane Digital Hub into the future.

He estimated it was probably one of the first digital hubs in the country located in the same building as a local authority and the LEO was very happy to support the project.

He believed those running the project were going about it the right way by incrementally growing the hub and wished the project every success.