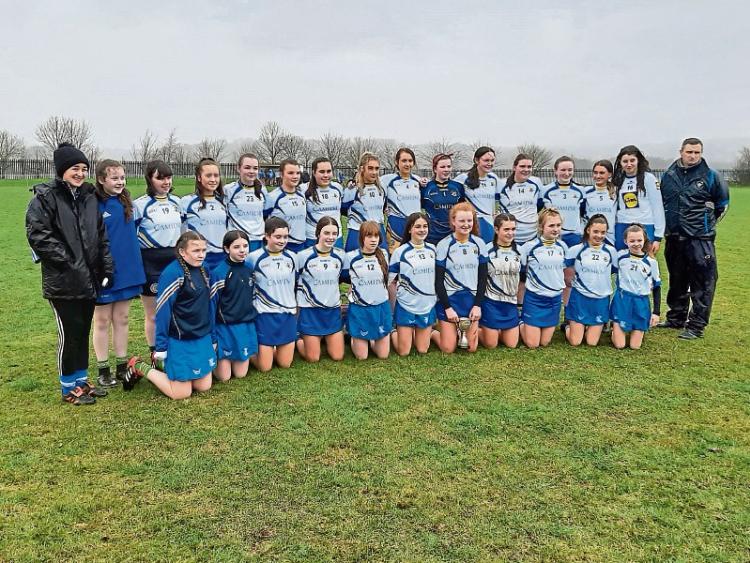 The Cahir Colaiste’s Junior camogie team booked their place in the All Ireland semi-final after being crowned Junior Munster Champions. They defeated Ballincollig Community School 5-11 to 1-9 at the Cork Camogie Grounds in Mahon, Cork City. It has been a highly successful school year so far for Colaiste’s girls as several members of the panel had already collected the Munster and All Ireland 7s titles last October.

In very difficult weather conditions Colaiste’s players got going from the throw-in and despite Ballincollig’s best efforts, CDI never relinquished their lead throughout the match.

Ballincollig had come into this game as a goal scoring side. But CDI’s backs, led by Caoimhe O’Mahony at full back and Ava Caplice at centre back were very much dominant figures throughout. Abby Noonan continued her great championship form with great saves at crucial moments during the game.

At the other end of the field CDI’s forwards were up and running. Aisling Ryan at centre-forward would finish the half with four well-taken points. The pace of Niamh Costigan and Emily Coffey was causing Ballincollig all sorts of difficulties. Inside at full-forward Kacey Meehan tormented her Cork opponent getting CDI’s only goal of the first half. Ballincollig replied quickly with a goal of their own. But the switch of Molly Purcell back to corner back closed off any further avenues of goal scoring for Ballincollig. Eabha Lambert in the other corner, with Hannah O’Gorman and Leah Caplice both at half back started to tighten their grip on Ballincollig’s attack.

Points from captain Rebecca Burke, Aoife O’Neill, Niamh Costigan and Kacey Meehan saw a healthy lead of 1-9 to 1-1 at  half time.

On the resumption Ballincollig  came out a different team and the first five minutes saw CDI having to work hard to keep their opponents at bay.

The hard-working Katie O’Connor got a goal after one of her trademark darting runs and then Kacey Meehan took over CDI’s scoring duties for the rest of the half. CDI’s full forward was in unstoppable form, clocking up 3-2 in the second half before the final whistle. The supply of ball from CDI’s midfield partnership of Rebecca Burke and Niamh Costigan was of excellent quality. Leah Flannery and Emily Coffey showed grit in winning ball in the deteriorating weather conditions.

Ballincollig did not give in, though, and continued to chip away at CDI’s lead with several pointed frees and 45s. However, the gap was too large to bridge.

At the final whistle the large CDI support witnessed captain Rebecca Burke lift the cup to great scenes of celebration. Throughout this championship the girls were brilliant ambassadors for their clubs, school and county.

CDI now progress straight into an All-Ireland semi-final on February 15th with home advantage, where they await the winners of Connacht and Dublin in the quarter final.