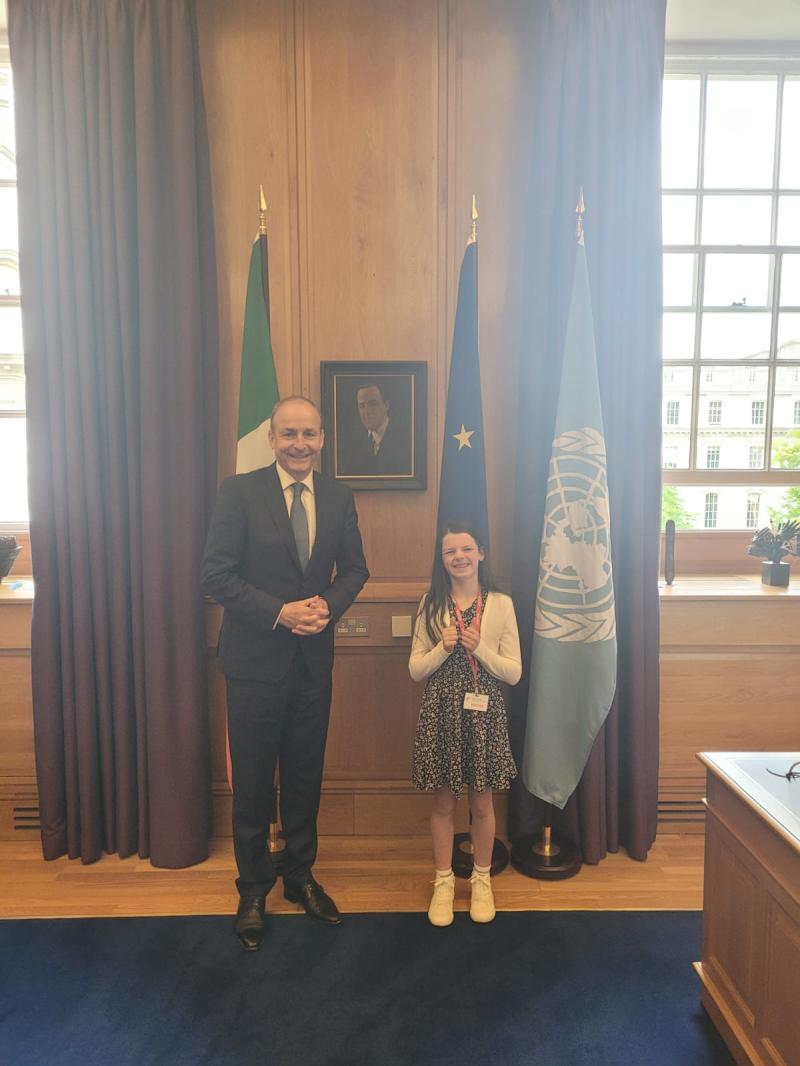 Eleven-year-old campaigner Cara Darmody from Ardfinnan is to engage with the Dáil Committee on Autism in the wake of her meeting with Taoiseach Micheál Martin where she lobbied for better services for children with autism.

Cara bluntly told the Taoiseach when she met him at Government Buildings in Dublin that it was “an absolute disgrace” how children with autism are being treated in this country, having to wait years for basic services.

“I told him that it’s not good enough and that it must change right now,” said Cara, who was accompanied by her parents Noelle and Mark and local Fianna Fáil Cllr Micheál Anglim at the meeting on July 28.

“I told him he must treat it like a national crisis, or like the house being on fire. He must do something about it right now. I also told him that these kids are being treated like 3rd class citizens.

“I also said to him something really important, that there is permanent damage being done to these kids when they don’t get diagnosed with autism quickly, or when they don’t get services. One of my brothers got some services, the other didn’t, and that made a big difference. So, I know what I’m talking about,” she continued.

“The Taoiseach was incredibly respectful and kind. He was extremely articulate and well-briefed for this meeting, which did greatly impress me.

“We did not go in there asking for anything for ourselves and I think that’s what gave us massive credibility. Our beautiful sons Neil (9) and John (5) came up as we highlighted various examples of the many problems faced by so many families nationally.”

Cara’s father Mark said: “They are not treating this with extreme urgency. It has become acceptable to leave children waiting three to four years for services that they should be getting immediately. That is not acceptable in our book.

“I was very clear that the Taoiseach needs to hold the HSE to account, and I did not hold back in expressing my view that the HSE is doing a disgraceful job when it comes to children’s disability services. Their phrase of ‘Early Intervention’ is a total and utter joke. What they are doing is the entire opposite of what they are saying.

“I expressed serious concern to the Taoiseach that nobody seems to know the exact productivity level of the HSE when providing these services. I did not hold back in saying that, in my opinion, they are doing very little and that this is why we have long waiting lists.

“I will now be calling on local politicians to start asking questions about what is going on here in south Tipperary.”

The Taoiseach tweeted after the meeting that it had been a great privilege to meet Cara Darmody with her parents and thanked her for her advocacy on behalf of her two younger brothers, and for children with autism and special needs.

Cara said she told the Taoiseach nicely that she will be back if things don’t change.

“I told him that I’m not going away, that I’m going to keep on talking about this on national TV and radio until something is done about it.

“He was aware that I’m sitting the Leaving Certificate maths exam next year while in Sixth Class so I think he got the message loud and clear that he’ll be hearing from me again,” said Cara, who earlier this summer sat the Junior Cert ordinary level maths as part of her campaign.

“I do want to say that it was incredible to be in the Taoiseach’s office. He was really, really nice and I do think that he listened.

“But now he needs to do a lot of action to keep me happy,” she added.

Cara will now engage with the Dáil Committee on Autism, which will hold hearings this September.