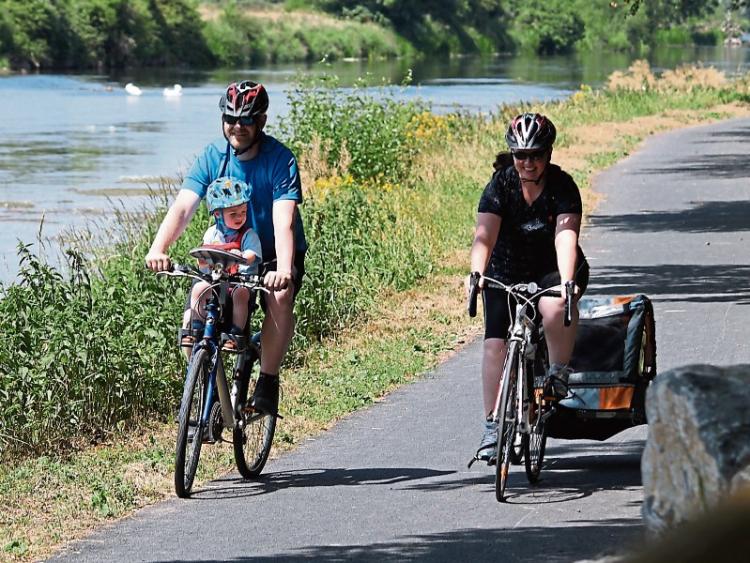 Tipperary County Council plans to carry out €137,000 worth of river bank repairs and footpath surfacing along a section of the Suir Blueway in Carrick-on-Suir this summer.

Carrick-on-Suir Municipal District councillors were informed at their monthly meeting that the Council is  seeking a contractor for the €137,000 Blueway Improvement Project for about 1.7km of the riverbank walk at Carrick-on-Suir  starting at Sean Healy Park.

The project will involve repairing and strengthening the river bank and widening and surfacing the walk/cycle path.

Access for cyclists from the Blueway at Sean Healy Park to the public road will also been improved.

District Engineer Willie Corby told The Nationalist this section of the Blueway at Carrick-on-Suir will be closed to the public while the works are taking place.

He said the project  is being funded by the Department of Rural & Community Development’s Outdoor Recreation Infrastructure Scheme.

The good news about the project was tempered at Carrick-on-Suir MD’s monthly meeting by a complaint from a Carrick-on-Suir councillor about cracks along the Blueway footpath, overgrown vegetation impeding walkers and cyclists and a lack of lifebuoys along the amenity.

Carrick-on-Suir’s Cllr David Dunne told the meeting he was very disappointed to see three cracks on the Blueway path during a recent walk along it and called for the cracks to be repaired before more damage was caused.

He also complained about overgrown vegetation along the Blueway walk and cycle path.

One section of the Blueway he walked along that was tidy was maintained by Coolmore Stud which owned land along the river bank.

He couldn’t understand why similar maintenance wasn’t done in other places along the Blueway.

And he called for a system of distance markers to be erected along the Blueway so that in the event a person suffered a heart attack while on the amenity  their location could be easily identified to emergency services.

Mr Corby explained that cracks along the Blueway walk and cycleway were an ongoing problem because of movement of the river bank during the winter months and would require ongoing maintenance.

In relation to the complaint about overgrown vegetation, Mr Corby explained that during the Covid-19 lockdown, Council staff only carried out essential works but maintainence work on vegetation along the Blueway was now resuming

He said he would refer the issue Cllr Dunne raised about lifebuoys to a life saving expert and committee that  advised the Council about the provision of lifebuoys along the Blueway and inspected them.

Lifebuoys were generally provided on the Blueway near the urban areas and were not as widely positioned along the rural sections but he gave a commitment to consider increasing the number of lifebuoys along the route.

Mr Corby said providing a system of markers for emergency services was discussed previously with  colleagues in Clonmel.

He gave a commitment to raise it again with Council colleagues dealing with the Blueway to see if a  marking  system should  be installed.

The District Engineer pointed out to The Nationalist that there were already kilometre distance markers at access points to  the Blueway.