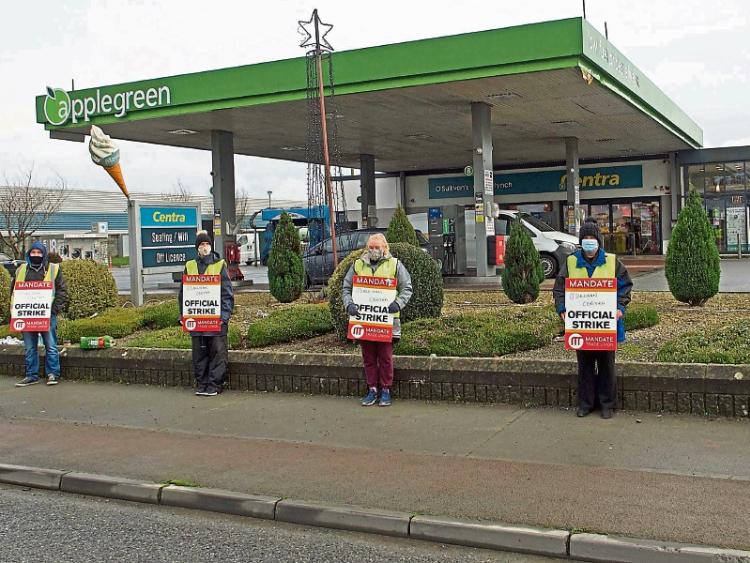 Some of the 10 staff at O'Sullivan's Centra in Carrick-on-Suir on the picket line during their second day of strike action last month. Picture Anne Marie Magorrian

The trade union Mandate has accused the proprietor of a Centra store in Carrick-on-Suir of  “victimising” staff members who took strike action  last month, by not paying them the annual Christmas bonus.

The industrial dispute at O’Sullivan’s Centra Service Station store at Ballylynch, Carrick-on-Suir is over trade union recognition, pay and conditions.

Ten staff at the store, who are Mandate members, staged two days of strike action before Christmas as their employer has refused to engage with the union in relation to their pay and conditions.

Mandate divisional organiser Betty Dillon said their members at O’Sullivan’s Centra found out just before the Christmas holiday that they didn’t receive any Christmas bonus while colleagues not involved in the dispute did.

She said the Mandate members at the store  were “absolutely disgusted” at not receiving a Christmas bonus and she accused their employer of “victimising” them.

“I want to reiterate these are workers who have worked for nine months on the frontline during the pandemic, and this is how they are repaid.”

Ms Dillon said Mandate will now be consulting with the 10 staff members involved in the dispute in relation to an escalation of  industrial action. She said the store’s owner continues to refuse to engage with the union.

The Nationalist contacted the company, owned by Martin O’Sullivan, for its response to the union’s criticism but received no reply.

Following the first day of strike action on December 10,  the  company issued a statement, stating it preferred to deal directly with staff rather than with a third party.

“We respect people’s right to join representative organisations but we are a small family business with 5 full-time colleagues and 41 part-time staff, and our position as a store has always been that we deal directly with colleagues,  rather than a third party.

“Given the small size of our business, we have found that this is the best way to engage with colleagues,” the statement concluded.