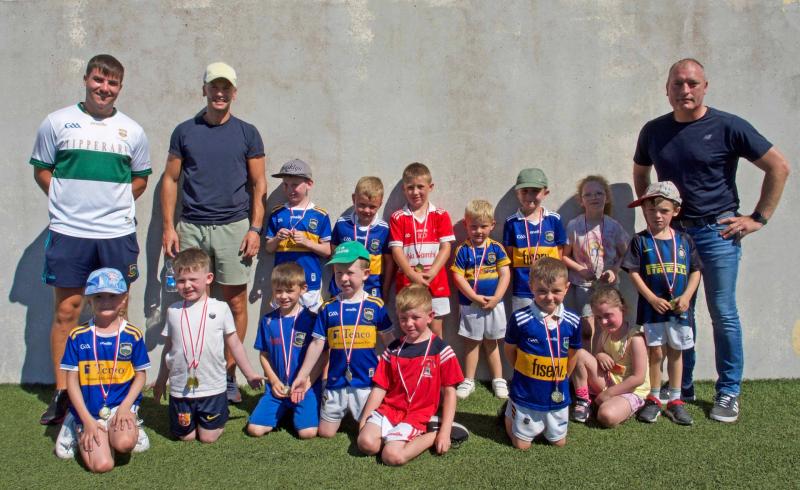 More than 50 children enjoyed the games, GAA skills sessions and matches run at the camp that ran at Davin Park between Wednesday, August 10 and last Friday, August 12.

Before presenting the camp’s young participants with medals, Tipperary manager Liam Cahill spoke to the children giving them advice on playing and training and answered their questions.

Each medal was engraved on the back to mark the centenary of the founding of Carrick Davins GAA Club, (1922 – 2022).

The Davins GAA Club is the only club in the world named after GAA co-founder and first President, Maurice Davin from Deerpark, Carrick.

The medals presentation ceremony was followed by a barbecue.

She thanked Ann Power, who keeps the club spotless all year, and was a tremendous help during the camp and also Shelly Ryan, Morgan Butler, Lynsey Hackett and Daryl Walsh who did whatever was needed which included filling more than 200 water balloons.

Antoinette also paid tribute to Walter Whitty who provided the children with hot food last Friday and does so every year and Liam Cahill for taking time out to visit the camp “in what was a very tough week for Tipperary GAA, we are very grateful to him for making the time and the kids loved it”.

She concluded by thanking the children and their parents/guardians.

“The kids were great fun and everyone listened and enjoyed themselves in very hot conditions. It was great to welcome kids from other clubs in the town. This is what it is all about.”

Check out more photographs from the summer camp in this week's edition of The Nationalist now in local shops.