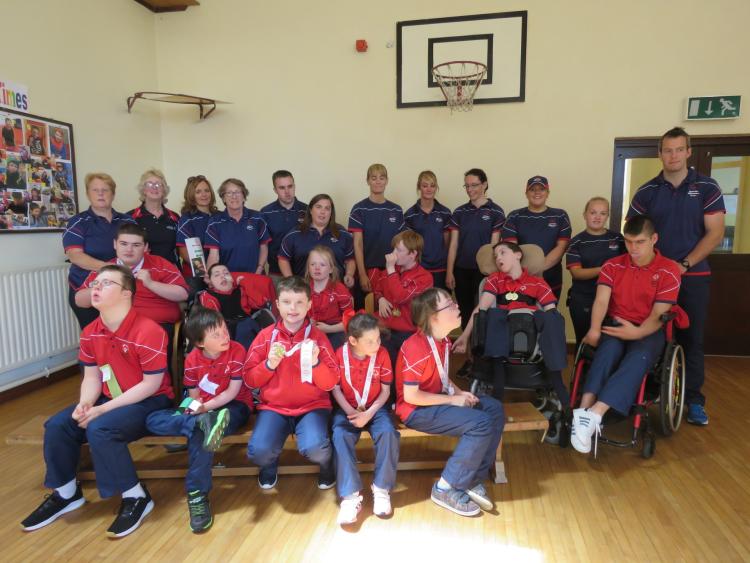 Staff and students at Scoil Aonghusa in Cashel gathered in the summer sunshine next to their running track last Friday morning to celebrate the success of their athletes at the Special Olympics Ireland Games in Dublin.

Athletes from the school brought home an impressive haul of 15 gold medals and one silver medal from the national games.
But medals weren't the only measurement of success. For many of the athletes qualifying for the Game and the honour of representing Munster was just as big an achievement. Many of those who didn't win a medal, achieved personal bests in their events. Twelve Scoil Aonghusa students aged between 10 and 17 competed at the Games. Declan Foley from Carrick-on-Suir was the only Munster equestrian rider to win a gold medal while Cian Hurley from Fethard won two gold medals in the 25m freestyle and 25m back stroke swimming events.

Another double gold medallist was Erin Fitzgerald from Clonmel who won both the 25m walk using a walker and the tennis ball throw. Charlie Corcoran from Thurles won a silver medal in the 50m run and was fourth in the soft ball throw.

A haul of gold Challenge Award Medals was also won by the students who competed in motor activity events. Ten year-old JJ Ryan from Monard, who was Team Munster's youngest athlete, won two gold as did Jamie Marie Tobin from Kilmoyler, Ben O'Dwyer from Golden, Cameron Meehan from Kilcoran and Ryan Brennan from Cahir.

Equestrian athlete Dylan Reilly from Clonmel was placed just outside the medals achieving fourth and fifth places in his two riding events. Pic: Charlie Corcoran from Thurles, pictured with his coach Helen, was also given a hero's welcome at his sister Libby's school Michael Naofa Holycross last week when he visited with his Ireland Games medal

The athletes were greeted with cheers and applause as their individual achievements were recounted by principal Siobhan Keyes Ryan.

The school's head Special Olympics Coach Geraldine Meagher was presented with a bouquet of flowers and a framed "thank you" picture in gratitude for her dedicated work on behalf of the school's athletes.

"Geraldine has been such an advocate for Special Olympics since it entered Ireland in 1978. I don't think there is any other school that has been involved in it for so long," said Ms Keyes Ryan. She said next September when they began preparing again for the regional Special Olympic games she knew every one of them would put their names on the list to get involved.

"You don't get paid for it and you won't get the time back but you give it your all that is why Special Olympics does so well here." The celebration ended with a chorus of three cheers for the Special Olympians and everyone joining with 10 year-old Serif American Muntean from Tipperary Town in singing Queen's hit song "Don't Stop Me Now".