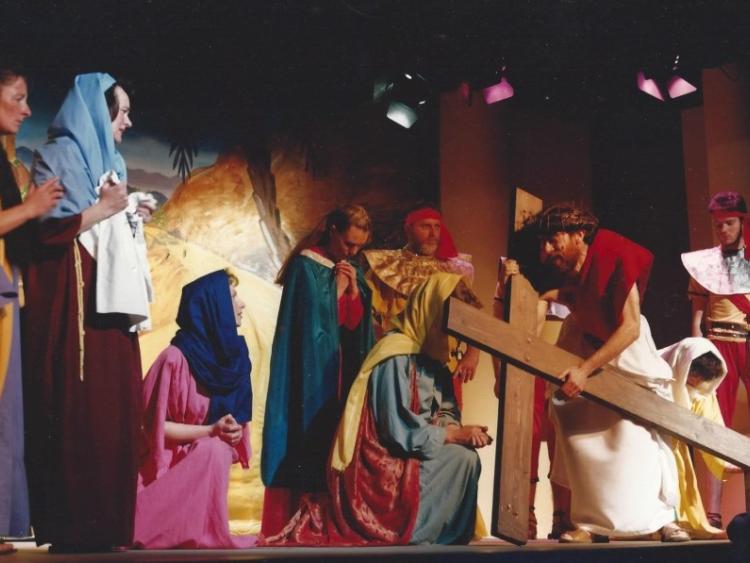 In April 1990, thousands of patrons filed through the doors of Halla Na Feile to see a production like none other.

Over the course of an 11 night run, a group of talented Cashel actors came together to stage a powerful reenactment of the final 24 hours of Jesus Christ.

Some thirty years on after taking on the title role in The Passion, Fr Bernie Moloney still receives calls from parishioners eager to recall the monumental production.

“Months of planning went into it and countless hours of rehearsals. We had to get it right,” he says, explaining he felt a mixture of emotions in the run up to opening night.

“I felt a great privilege in getting to take on the role of Jesus Christ but it was a daunting experience at the same time. Any negative feeling faded halfway through rehearsals though as I knew the production was going to come together.”

The idea to produce a drama telling the story of Jesus Christ’s final 24 hours was initially floated in the 1980’s by Billy Eakins; however it wasn’t until 1989 that the wheels were fully set in motion when Brother Kevin Tracey of Cashel CBS suggested bringing in established actor and performer Martin Dempsey to lead the production.

By January 1990, the first auditions were held in the town to seek out the leading actors for the play with a rehearsal schedule taking flight by early February.

“To have someone of Martin Dempsey’s calibre was a great starting point. He would get the train down to Thurles and someone would collect him and bring him to Cashel. He would stay overnight and work with us again the next day. He was filming in Belfast at the time so it was a tremendous workload for him to be taking on alongside his own work,” says Fr Maloney, now based in the parish of Emly.

Months of prep work went into the planning. In total upwards of 180 parishioners were involved in the production - from building and designing sets, to sourcing props (and live animals), lighting to sound, it was a mammoth undertaking by the entire community. 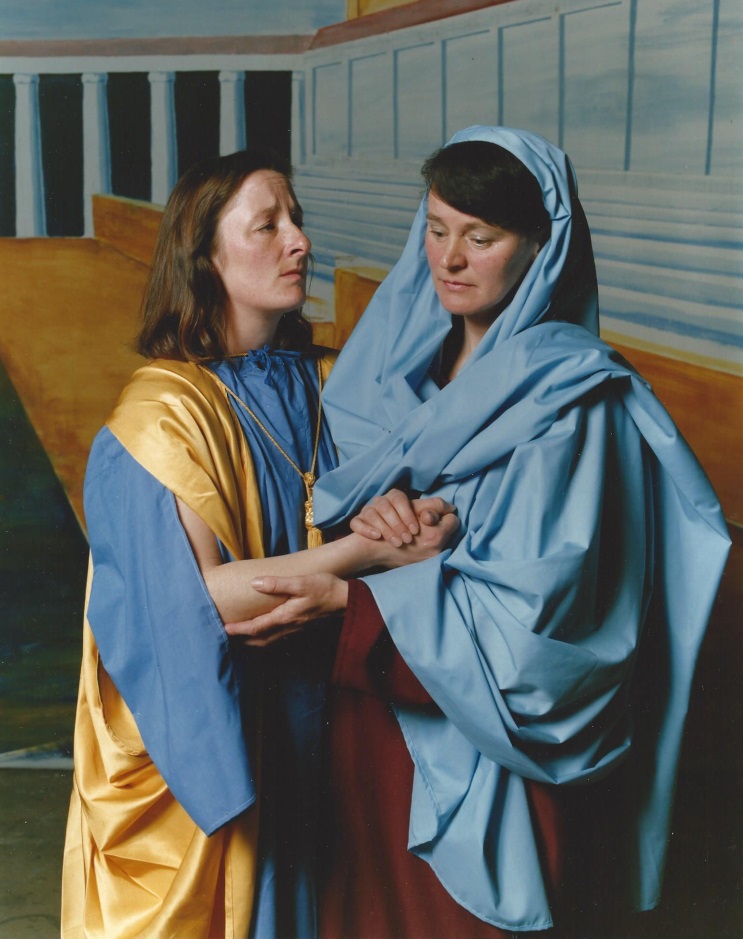 Heading up the costume department was Margaret O'Toole who put the call out to all priests in the parish to donate their old vestments to be turned into robes for the actors.

The creative department spent hours ensuring their costumes were up to scratch, dying fabric, making helmets and stitching thousands of studs onto the soldier’s clothes.

“It was hard work but enjoyable, she says. “I would come in after work, have my dinner and then head straight to Cashel until 10 or 11pm at night. In all we spent about three months preparing,” she says.

“I’d say there wasn't a vestment left in the diocese by the end of it,” she says.

Such was their craftsmanship that these costumes are still in use today by the local school during their own theatre and stage performances.

“For the show run we were the make up artists and we also made the tea every night,” she adds. 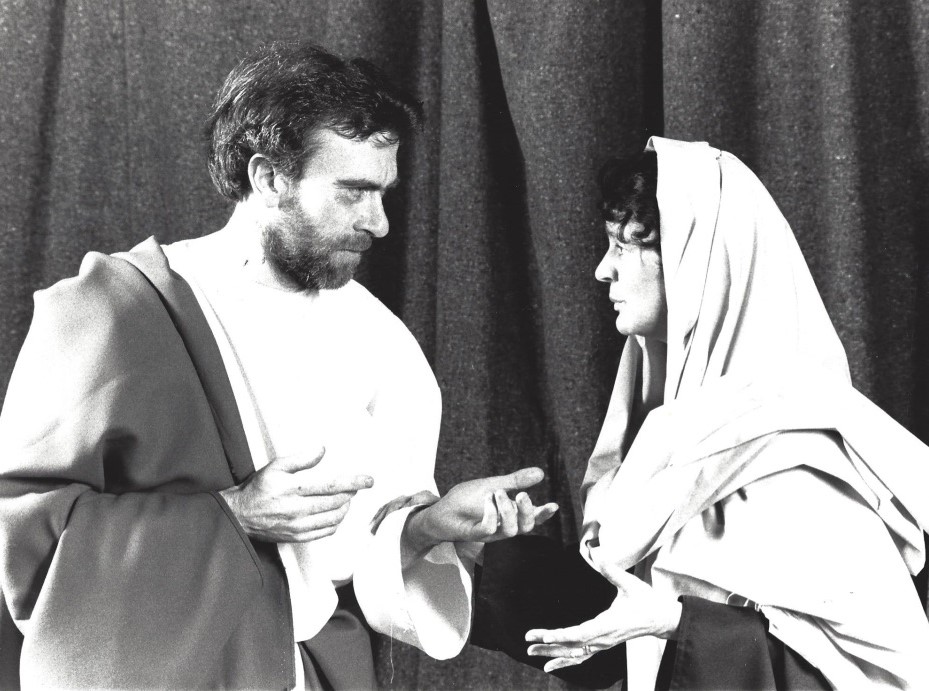 Male cast members were required to grow beards; “Men stopped shaving at the beginning of January. We were ahead of our time because having a beard today is very fashionable,” jokes Fr Moloney.

Alongside the actors and creative teams were a hard working committee who oversaw the financial aspects of putting on such a large scale production.

A full time coordinator was also hired to help with the organisation which Fr Moloney says was crucial to the play's success.

“Margaret Gallagher was identified as the person to take on the role and she along with Ursula Ryan enabled the production to fly,” he says.

“We were incredibly lucky because there was a whole generation in Mid-West Tipperary who had become very accomplished in stage work at the time. To put on a play of that magnitude a whole lot of ingredients need to come together at any one time and we were very lucky that we had the right people, the right teams in place,” he says.

Musical director of the production was Kevin Muldoon who oversaw a choir of over 30 singers, working in four part harmonies which again elevated the play to a very high standard while Maureen O’Leary took on the role of Mary, wowing audiences with her incredibly moving portrayal. 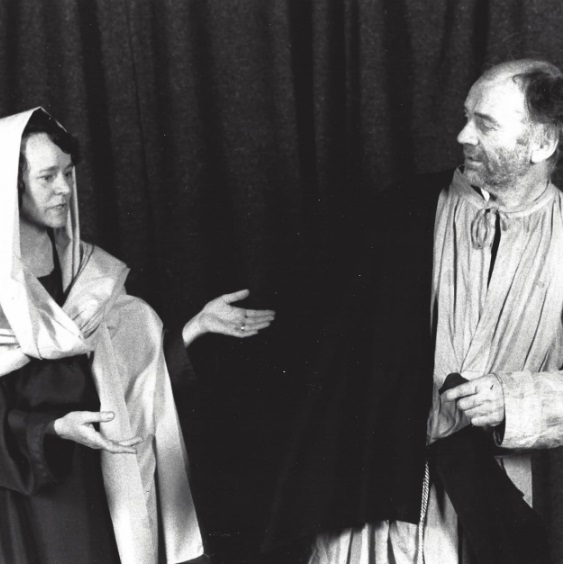 In all an estimated 5,000 people attended the two week run however the play could have continued for an additional week such was the demand, with buses coming from Cork, Limerick and further afield.

The immersive theatre experience was like none other ever hosted in Halla Na Feile with five stages depicting different scenes. The entire play was filmed over three nights as the talented camera crew filmed from alternate angles to ensure every scene would be clearly recorded.

This “theatre in the round” also meant actors would have to move through the assembled audience and provided a powerful opening scene as Fr. Moloney arrived by donkey surrounded by his apostles.

“He was incredibly docile so I was very grateful for that at least,” laughs Fr Moloney.

The play, which began its run on April 1 continued until the final performance on Good Friday. The hard work of the cast and background crew paid off as not a sound could be heard from the attentive audiences who were transfixed every night as the story came to life on stage.

“I think the play had a deep effect on people and there were a lot who were inspired or deeply impacted by the experience. It wasn’t just a drama. There was something profoundly moving and inspiring about it,” says Fr Moloney.