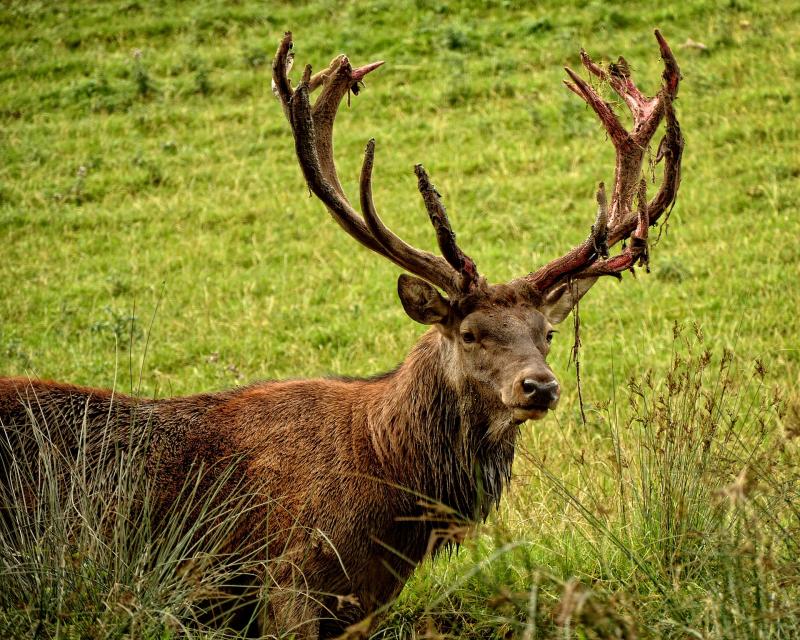 For the past few weeks, Irish mammals have been the focus of attention in our weekly articles and this week we look at the quintessential Christmas mammal, the reindeer or in our case the Irish red deer.

We are well accustomed to following the great herd of caribou or reindeer wandering across the arctic plains of our 45 inch television screens but there once lived in Ireland in the interstadial grasslands the greatest deer of all, the Irish elk. These magnificent creatures, fated to wander with the prairie grassland as they oscillated north and south with climate change still elicit absolute amazement when we see their giant skeletons in the “Dead Zoo” beside Leinster House or indeed out at Dovea at the Big House of the former Trant estate which is now at the forefront of Irish agricultural research. Eventually, as the post glacial grasslands became wetter, their weighty antlers caused them to topple into the grass fringed shallow lakes from which they were unable to extricate themselves but their bones remained well preserved in the shallow peat for aeons. The giant wooly mammoth also roamed Ireland and its remains were discovered in a cave in Waterford at the end of the 18th century. Unfortunately, although its bones were paraded through the town of Dungarvan as the thigh bones of a giant, most of the skeleton was pulverised to produce bonemeal, an early form of fertilizer. The reindeer became extinct in Ireland about 11,000 years ago.

But the great survival story of Irish mammals is that of the native Red Deer which we find in Killarney national park, Glenveagh national park and of course on Inishvicallaun following an inspired decision by a recent Irish politician. Of all the herds of Irish red deer, the Killarney herd is probably the truest to the original although all over Ireland, including Wicklow, the introduction of sika and fallow deer to great landlorded estates has played havoc with the genetics. Many still remember the herd of fallow deer in the deerpark at Langley’s Archerstown estate beyond Thurles. Still the deer cowering in a 15th century thicket on the wall of Holycross Abbey is very definitely an Irish red deer. With the loss of forests they have, in certain areas been forced to adapt to open upland moorlands and mountains. In the 18th and 19th centuries red deer became almost extinct in much of central and western Europe from being relatively abundant and widespread in the middle ages. The population in Donegal went extinct in the 1860’s but one wild population survived, in the Killarney region. Since then, red deer from Britain and Europe have been introduced to Irish deer parks on many occasions. The Donegal population was re-established in 1891 and they still retain their genetic similarity to Scottish red deer. The Kerry herd was supplemented by stags from abroad but the skulls of Kerry deer are different from the others consistent with their long isolation.

Red deer and sika deer hybridise in captivity and in the wild and in Powerscourt this happened within fifteen years of their confinement together but hybridisation has not apparently occurred in Killarney even where the two wild populations share the same range. Patience is required for watching deer in the wild. They are extremely sensitive to scents and it is important to be always aware of the wind direction and to approach from downwind. Move quietly and slowly, particularly if watching woodland deer and have clothes that blend in with the surroundings. Deer spend their days alternating between periods of feeding and ruminating and resting in cover. They may be seen at any time of the day but the best times are at dawn or just before dusk. A browse line may be evident on the trees and with red deer this will be about two metres from the ground. They also often pull strips of bark from trees. You may also notice their trails in woodland in the soft mud. No two male red deer grow identical sets of antlers and so individual stags may be recognizable. The Killarney herd are of high conservation value owing their survival to the designation of the grounds of the Herbert and Kenmare estates as a hunting reserve in the 19th century. As part of the current conservation strategy, subpopulations have been established on Innishvcillaune in the Blaskets, Doneraile Park and Connemars National Park. Hunting of red deer in Co. Kerry is absolutely prohibited.

Active conservation strategies, then, can make a real difference. We cannot offer red deer at Cabragh Wetlands but this preserved and protected haven will fully repay a visit on a fresh bright day around Christmas. What better place to escape the tyranny of the table and the television and perhaps, unwittingly, sow the seed of the love of nature in a young mind. Don’t forget to bring the wellies!

Wishing all our readers and nature lovers everywhere a happy Christmas and looking forward to meeting you all again in the New Year. Hope you see a few reindeers!