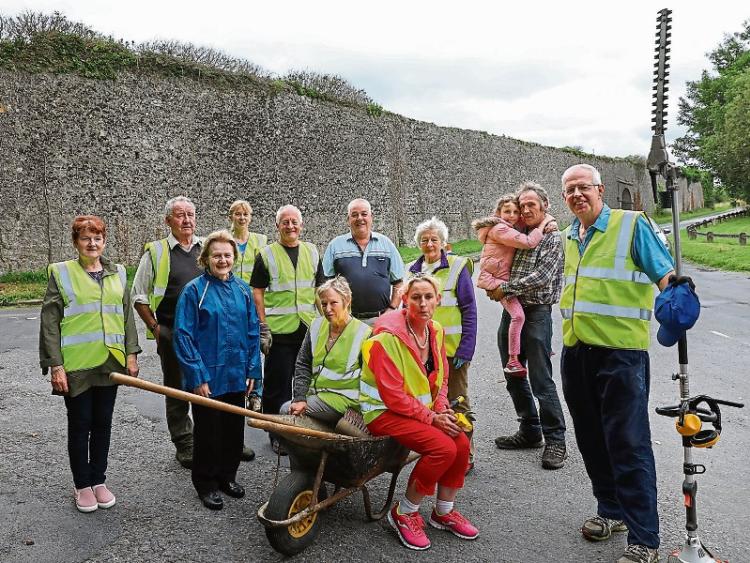 Marlfield Village Committee members who volunteer for maintenance work in the village each Monday evening.

Did you know that in 1773-74 the village of Marlfield was home to the largest grain mill in the country, and in later years a substantial whiskey distillery?

Or that at one time tolls had to be paid to pass through the main route through the village, which was on the Clonmel-Cork road?

These and many other snippets of information are recorded in the Marlfield Heritage Trail, the booklet produced by Tipperary County Council and the Marlfield Village Committee to accompany the trail itself.

Approximately four kilometres in length, the trail is best walked from St. Patrick's Chapel and includes ten information panels, each of which has information about the local area of heritage.

"The trail was produced to record the heritage of Marlfield", says Bernard Lennon, secretary of the village committee.

"The area escaped the development and house construction of the boom years, the Celtic Tiger era, with the result that most of the village isn't unlike what it was 50 years ago", he says.

"The village doesn't have a school, pub, shop or post office but has still managed to maintain its identity and integrity, and progressive view".

The Heritage Trail booklets and accompanying leaflets have generated an amount of interest in an area that's believed to have been populated as far back as 5,000 years ago.

During archaeological excavations for the golf course planned for the area - a project that was subsequently abandoned - evidence of ancient cooking sites, Fulagh Fiach, were uncovered. The remnants of a medieval graveyard and evidence of ring forts also offer glimpses into Marlfield's ancient past.

The trail begins at St. Patrick's Chapel, which stands on the grounds of the former Cistercian Abbey of Inislounaght (island of fresh milk), which was founded in 1147.

At one stage the abbey lands covered 12,836 acres and it was a commercial and wealthy enterprise until the arrival of the Black Death plague in the mid 1300s sent it into a downward spiral.

St. Patrick's Well, with a 6th-7th century cross mounted on a plinth in the centre of a shimmering pool of spring-fed water, is one of Marlfield's gems.

"According to Trip Advisor it was the second most visited attraction in South Tipperary a few years ago", says Bernard Lennon.

"Any day you could have up to 100 visitors there".

Another popular destination for visitors is nearby Marlfield Lake. More than 60 species of bird have been recorded on or near the lake, which is a designated Natural Heritage Area and where the many species of birds, ducks and swans can be fed at the feeding area.

The road beside the lake, known as the Pond Side, is also a popular route for walkers and joggers.

A new addition to the area is the marina at Sandybanks, which facilitates the growing numbers involved in water-based activities including kayaking and canoeing. However swimming at what was once a very popular bathing spot has declined in recent years.

As well as acting as a very useful guide for visitors, the Heritage Trail has also helped strengthen the sense of pride that locals have in the village.

The work party that gathers each Monday night during the spring, summer and autumn is a strong expression of this sense of pride.

Organised by the village committee, up to 20 volunteers tackle a variety of jobs including sweeping, cleaning, trimming, cutting and repairing, while planting of bushes and shrubs takes place in the autumn.

"The local residents and landowners (who include Frank Kent and Coolmore Stud) are very supportive", says Bernard Lennon.

"Residents are very proud of the village. We also have a good working relationship with the County Council and local councillors".

Bernard Lennon says the biggest issue facing the village at present is the high speed of the traffic, especially passing the lake.

"Some motorists show little or no respect for the pedestrians or the people of the area", he says.

The committee is now campaigning for a reduction of speed limits in the area.

As well as its rich history stretching back centuries, a nod to Marlfield's more recent past is the memorial seat dedicated to Joe Burke, a founder member of the committee.

"Joe was a great worker for the area and is sadly missed. The seat is a fitting tribute to him", says Bernard Lennon.