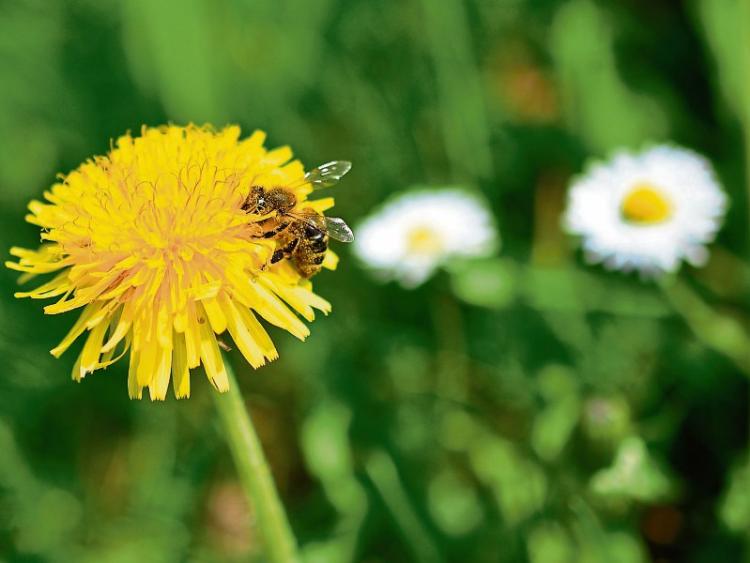 IN EARLY SPRING each year, the margins of the road close to where I live are covered in wide expanses of blooming dandelions. For a brief few weeks, the highly-trafficked Frank Drohan Road - the by-pass inner relief road - becomes a glowing orange vista, cheerful, easy-on- the-eyes, heralding a little warmth in the air.

And every year, just as the flowers reach their full display, the County Council takes its mowing machines out of winter storage, and beheads every single dandelion, revealing underneath the litter, the garbage, which we, citizens, carelessly throw away.

And every year, I ask the same question of my friends (and anybody else within hearing-distance): “Why does the Council do it? Why do they hate the dandelions that they viciously kill them?” The response is always the same “Oh, for God's sake, they’re only weeds. Remember we used to call them piss-a-beds when we were children.” Giggle giggle. And, by-the-way that cheeky description had some relevance because the old English herbalist, Culpepper, prescribed a distillation of dandelion for urinary problems.

Wildflowers, which once-upon -a-not-so-very-long-ago-time, used to be a common feature of our Tipperary farmland, have now been banished: killed-off by noxious chemicals, chopped down before they can re-seed. Even the once common daisy is becoming less common. The shy celandines, the ragged-robins, the trefoils, are struggling. All have been driven back to the margins, to old ditches where these are still in situ, and to a last refuge on roadside margins. Even the odd buttercup which dares to bloom in the small patches which we call our “lawns” are seen as, somehow, bringing down the status of the neighbourhood. In fact many of these urban patches are now being replaced by sterile gravel infills, through which no so-called weed can ever protrude.

The dandelion, almost alone amongst the wildflowers, seemed to be winning this battle for survival, though it, too, had to largely retreat to the margins of public roads. Perhaps this survival is due to its prolific seed structure and its remarkable facility for distributing that seed. It is this facility which the County Council is disrupting in its annual attack on the flower beds before it can reach full maturity.

And now, we ordinary people, killers of weeds, and the Council, in the tidying-up of our roads, are being told by the experts to STOP. We have  already lost one-third of the world’s population of insects, ranging from the very smallest, to bees and butterflies, and if that loss continues on its downward spiral, we will face serious problems in the fertilisation and pollination cycle and plant life, and on our capacity to grow food for human consumption.

So what possible connection can creepy-crawlies have with the food we eat and the lives we live? Well it seems that we, arrogant human beings that we are, have yet to learn that there is an interlinkage between all things on earth; that, in the miracle of creation, there is an inter-dependence between even the minutest, and apparently insignificant form of life, and us at the highest level, where we, again arrogantly, place ourselves. And, now, the experts tell us, that we are destroying the balance of that inter-linkage and inter- dependency.

We have been spraying poisonous chemicals on plants we call weeds just because they stray onto our little patch of earth. We have thus killed the tiny stick-like insects which live on their blooms or on their roots, and whose special functions in the life-cycle we know nothing about. We have beheaded them, as the Council beheads the dandelions on the Frank Drohan Road, just when they become mature enough to supply the pollen which the larger flying insects re-distribute to other growing plants, including our fruit trees and our vegetables, and thus supply the fertilisation necessary for reproduction. It’s the birds and the bees, stupid!

I confess I have made my own contribution to the killing of insects. When DDT first came on the market (fortunately it is now banished!) I sprayed it on the little cloud of house-flies which used to inhabit most homes once-upon- a-time. I do not know what function in nature these performed, but I have not seen a single house-fly since. And, armed with the weapon of a rolled-up newspaper, I have pursued any stray blue-bottle or wasp that dared enter my kitchen and I have squashed them to death. I now regret the wasps which I have killed. It seems that however nasty they may seem, they perform a very useful function in nature. While I have never directly killed a spider, because I admire the beautiful structure of their webs, I have put them out-doors, where they probably died of frostbite.

But, now, like everybody else, I have been warned. We are told by the experts that a few simple things will help to halt the decline of insect life. Be nice to weeds. Plant a patch of wildflowers in the garden, or plant the early species of common garden flowers, just to help any bees that might be tempted to leave their hives in the early sunshine of Spring. And don’t mow the lawn-grass into a smooth carpeting. Allow it to grow for at least six weeks and then mow - if you feel you have to mow! But, above all, abandon deadly sprays.

So, maybe the County Council might give us some positive examples in restoring a balance in nature. Would they allow the dandelions to display their lovely orangey glow for a little longer this Spring, before they cut their heads off on the margins of the Frank Drohan Road?