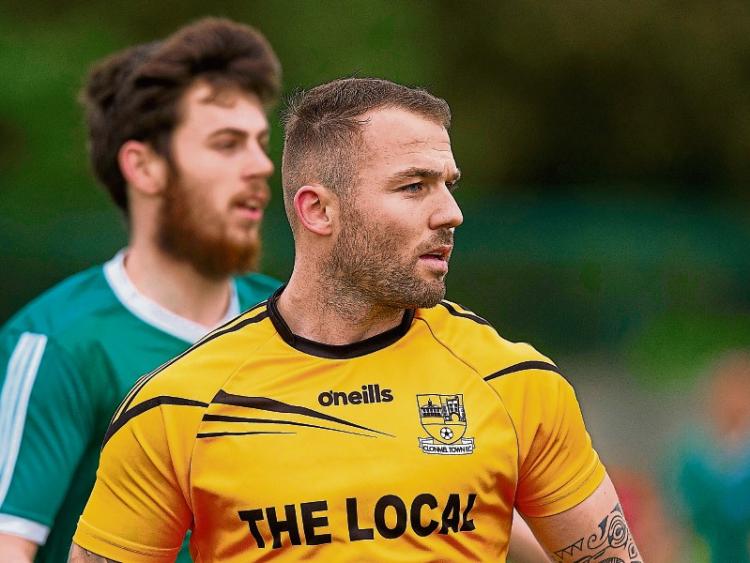 Hot-shot Evan McGuire who scored a hat-trick for Clonmel Town in their 4-2 away win at Bansha Celtic on Sunday last in the Premier League.

Clonmel Town kept their faint Premier League title hopes alive on Sunday last when they leapfrogged their opponents Bansha Celtic in the league table with a well-earned victory.

The visitors were in good shape right from the start and were awarded a penalty kick in only the fifth minute which was despatched by Conor O'Sullivan.

Both sides had some good chances after that but failed to convert, and it looked like there would be only a single goal between the teams at the break. However late in the half a long throw into the Celtic box wasn’t cleared and Evan McGuire forced the ball home to double his side[s advantage.

Celtic started the second half the stronger and were awarded a penalty of their own ten minutes in which Bernard Fitzgerald converted.

They continued to push for the equalizer but got caught with a classic counter attack 20 minutes from the end when McGuire was on hand to score at the back post.

Five minutes later a defensive mix up lead to McGuire finishing to an empty net to complete his hat-trick, to give Town a comfortable lead. Ten minutes from time Killian Fitzgerald pulled another goal back for the hosts to set up a grandstand finish. It wasn’t to be for the home side however and Town held onto their two goal cushion easily enough to take all three points.