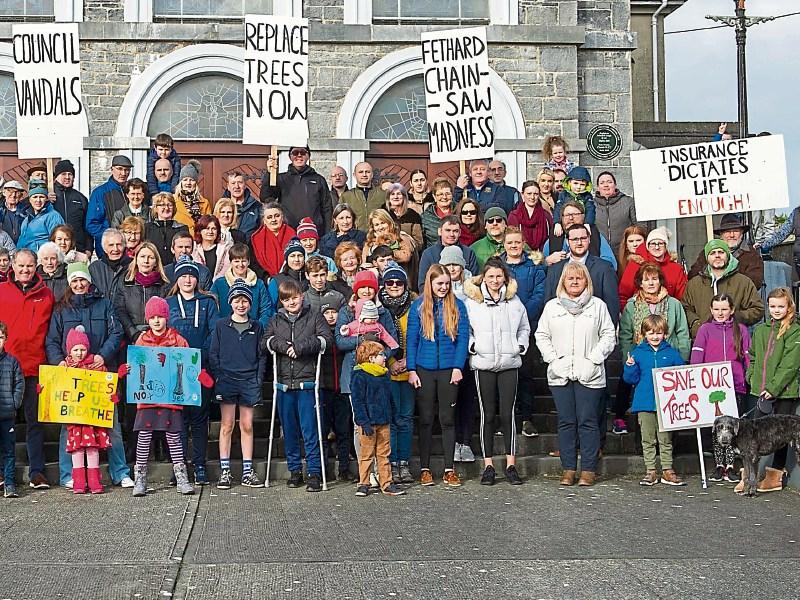 A section of the crowd that attended the protest in Fethard over the Council's felling of trees in the town.

Community groups in Fethard angry over Tipperary Co. Council's decision to fell nine broadleaf trees on the town's Main Street and Burke Street, are to request a meeting with the local authority to discuss their concerns.

The meeting is being sought in the wake of a protest on Fethard's Main Street over the cutting of the trees that was attended by an estimated 200  residents.  The lime, acer and cherry trees aged over 20 years were cut by the Council  to remove "trip hazards" and ensure footpaths are safe to use.

Dr Alan Moore of Fethard Historical Society, which jointly organised the protest with Fethard Community Council and Fethard Tidy Towns, said they wanted to discuss with the Council how to avoid this happening again and learn from better tree conservation practices in other local authorities.

When they meet with the  Council, the community groups will present a petition signed by local residents condemning the felling of the trees and requesting  public consultation in the future.

"We remain very disappointed that we weren't consulted and we hope the Council acknowledges the shortcomings of its actions and sets a better example in the future not only to other councils but to private tree owners.” said Dr Moore.   He blamed  the "pernicious influence of the  "litigation industry" for the Council's decision to cut the trees.

The Council plans to plant new trees to replace the ones that were felled.