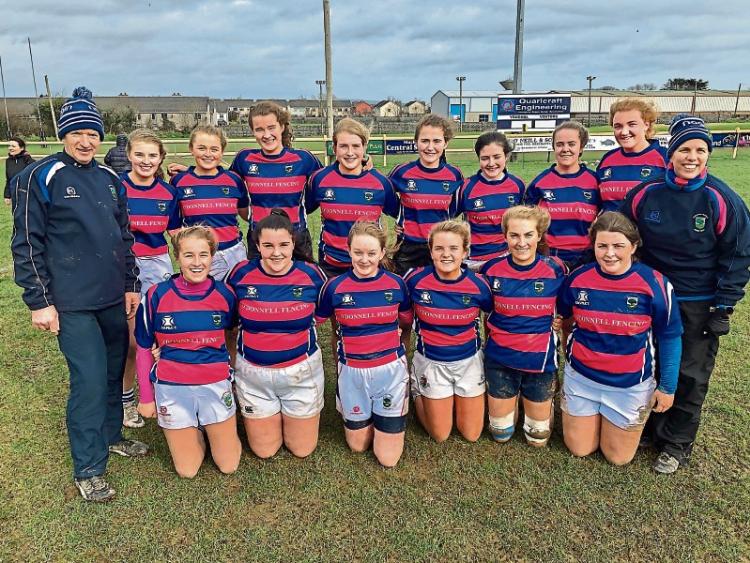 Fethard U18 Girls Rugby team that started their cup campaign off with an away win against the Cork-Youghal combination team from Highfield, Kinsale, Midleton and Youghal

Fethard U18 girls rugby team started their cup campaign off with an away win against a Cork Youghal combination team from Highfield, Kinsale, Midleton and Youghal.

In tough and trying conditions the girls attacked well from the start.  Captain Eabha Fitzgerald got the first try early in the game to get the contest quickly underway.  With great work from Clodagh Fanning and Karen Bennett the Fethard girls continued the attacking play in windy weather.

Youghal came back with a try, but Fethard counter attacked with strong carrying from Ciara Gahan which resulted in our second try.  Anna Kennedy and Tilly Magner put in great tackles and good scrummaging. Kate Flannery was able to flush the ball out to the wing and with Lucy Murphy and Aoife McGrath able to carry the ball and off load to Kate to score Fethard’s third try of the game.  Kicker Annica O’Connor ably converted despite the wind.

With great work by Aoibhe Gayson Molloy to keep the ball alive and with her running for space Aoibhe was able to score Fethard’s fourth try of the game.  Our wingers, Orla Maher and Rachel Ryan, were kept busy and were not only great in defence but made plenty of ground in attack. Shauna Maher in the forwards was a great asset and robbed ball and offloaded to Ciara Gahan to then work a wonderful line of running from Eabha Fitzgerald to score Fethard’s fifth try which Annica O’Connor kicked strongly to convert.

Best of luck in the next cup match away to Nenagh.