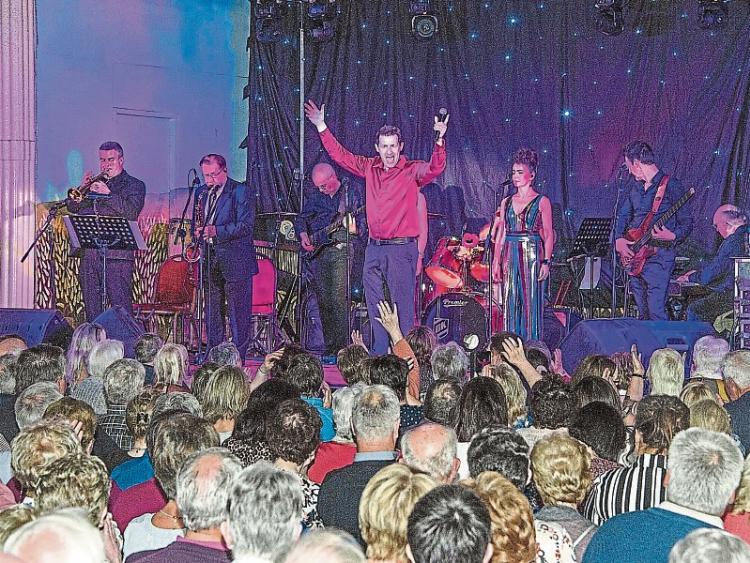 Ray Dolan singing with family members to a capacity crowd at the ‘Remembering Joe’ show in Fethard Ballroom in May 4, 2019.

Since the 1960s the roof at Fethard Ballroom has been raised many times to the music of big band sounds but before this year is out, the roof will be raised, literally, like never before, with  plans in the pipeline for major work at the iconic ballroom.

The news will come as music to the ears of those who use the venue, both locally and from far afield.

The Fethard and Killusty Community Ballroom Limited Company who run the hall have now embarked on an ambitious plan that will see the “Grand Old Lady” of Tipperary ballrooms return to its splendid best over the coming years.

Grant aided by LEADER but also relying on its own hard-earned resources, the committee have put Phase 1 of their plans out to tender and will be hoping to have work on replacing the asbestos-clad roof (and three windows on the south elevation) started by the end of 2020. Thereafter, as funds permit, the committee will be hoping to have some internal work undertaken which will give the well-known dancing mecca a deserved facelift.

Great care of course will be taken at all stages to ensure that the delicate character of the much-loved venue will not be interfered with in any way. Principally, the dance floor and the amazing acoustics will be maintained exactly as they are today.