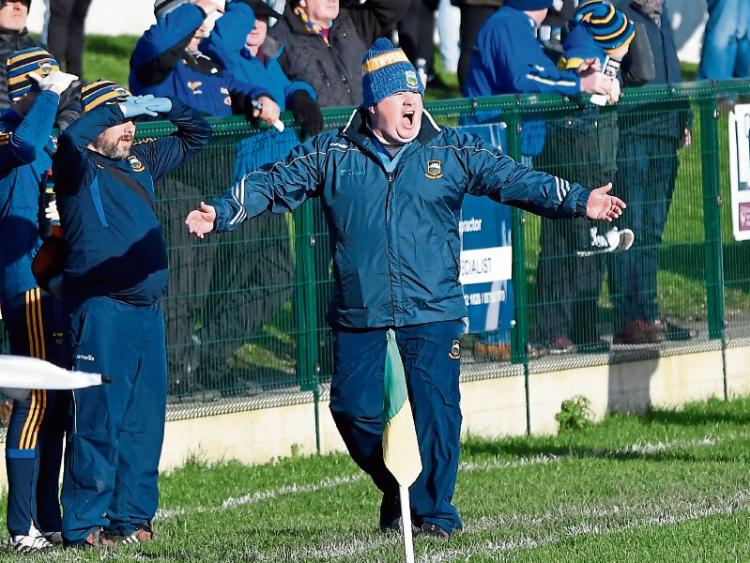 Tipperary manager David Power patrols the sideline on Sunday last during the Tipperary versus Down National Football League Division 3 game.

Tipperary manager David Power was a little mixed in his reaction to Sunday’s draw with Down when speaking immediately after the game.

“It is kind of frustrating, we could have won it and then we could have lost it as well but I am extremely proud of the players. I thought they put in a huge shift out there after a bad start again. We have been starting badly in even challenge matches, but we kept going hard, we kept driving on. We missed a couple of chances and even if we had a bit more composure at the end I think we could have snatched it.”

Unhappy with the consistency shown by the referee in his handing out of cards in relation to Jack Kennedy’s dismissal, the  manager took heart from the battle shown by his side.

“We could have folded there quite easily. We were down to 14 men but to be fair to the lads they kept really digging in and as I said it could be a vital point by the end of the league.

“We could have easily died but I thought we were getting stronger. We brought on a couple of fresh legs. You have to get the balance right. The way I am looking at it is we need to find our best 21 and we are still working towards that because the way the modern game is gone you have your starting 15 but you need your four or five subs to come on and make some impact as well.

“The boost in terms of confidence is huge”, according to David Power.

The manager was very impressed with the displays of defenders Alan Campbell and Dáire Brennan and  he thought “Colm O’Shaughnessy was outstanding. Over the last couple of years things haven’t been happening for him but in the last couple of challenge matches we have  been seeing the old Colm O’Shaughnessy back and I am delighted. And John Meagher too. They’re great lads. Looks it’s a good start, a good start,” he concluded.