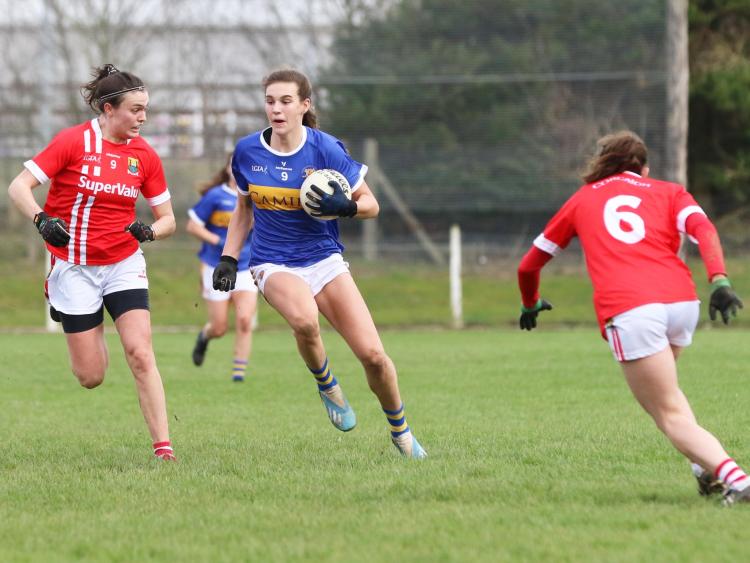 Reigning National League champions Cork recorded their second win of this year’s campaign when finishing much the stronger against Tipperary on Sunday afternoon at Ardfinnan winning by 2-11 to 1-6.

With 12 minutes remaining Tipperary were still very much in contention having reduced a six-points interval deficit to just two, but the Rebelettes managed 1-3 without reply down the closing stretch for a somewhat flattering eight points win in the end. In the process they exacted sweet revenge for last year’s stunning defeat at the hands of their opponents in Páirc Uí Rinn, a game won by an unforgettable Aishling Moloney late goal.

From the outset the intention of the visiting team was very clear as they went about making full use of the strong breeze at their backs to lead by 0-5 to 0-1 inside seven minutes.

While Tipperary had the first score of the game, a well-taken point by Roisin Daly after just 30 seconds, Cork soon imposed themselves on the Tipp rearguard. An obvious tactic employed was that of putting huge pressure on the Tipperary kick-outs, Tipp struggling to get beyond the 45 for extended passages. Three Orla Finn frees, separated by two points from play from Brid O’Sullivan and wing-back Maria Curley had Cork four clear and looking very much in control.

Tipp began to compose themselves a little better after the initial Cork flurry and got right back in the game with a brilliant goal from Caitlin Kennedy in the 11th minute. After Aishling Moloney traded passes with Laura Dillon, the Cahir forward played a delightful diagonal pass into the path of Kennedy who shot superbly from 20 metres to the top of the net.

The fillip raised Tipperary spirits no end and with some solid defending they were keeping Cork at bay and the scoreboard quiet until a pair of points inside a minute from Saoirse Noonan and Orla Finn stretched the visitors advantage to 0-7 to 1-1 after 17 minutes.

With the Tipp half-back line of Maria Curley, Brid Condon and captain Samantha Lambert working overtime a three points deficit against the strong breeze wasn’t too concerning until disaster struck in the 23rd minute. A poor kick-out was seized upon by Cork and an interlinking movement between Libby Coppinger and Aine O’Sullivan saw the latter powerfully hitting the back of the Tipperary net.

Late in the first half Aishling Moloney scored a superb point when taking on the red rearguard almost single-handedly to point before Maire O’Callaghan had the last score of the half to send Cork to the break leading by 1-8 to 1-2.

Tipp, who had recorded an excellent opening day draw with All-Ireland champions Dublin last weekend, came out in determined mood for the second half and inside a minute were up on the scoreboard with a 43 metre free from Aishling Moloney after Caitlin Kennedy had been fouled.

Eight minutes in another Moloney free, after she had been impeded in full flight, reduced the deficit to four and Tipp were moving better with the elements behind them. 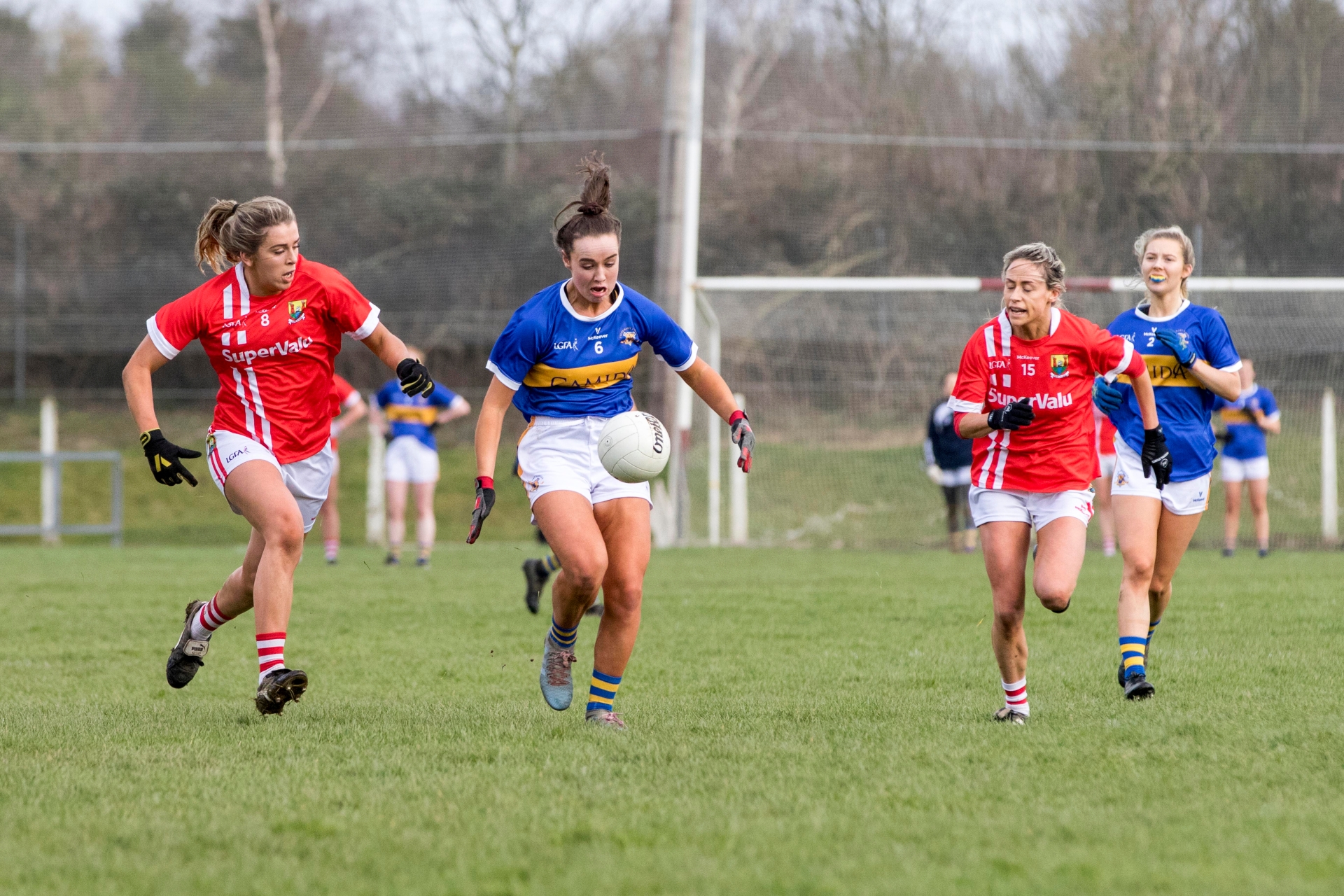 It seemed Cork were prepared to park the bus in Ardfinnan with at times 13 players behind the ball in the second half. Resultantly opportunities were few and far between for the Tipp forwards. Unlocking that defence was proving difficult and stamina-sapping in workrate, but in Aishling Moloney Tipp had the key and two points from play in the 44th and 48th minute had the margin back to just two.

It was to be as good as it got though for Tipperary as they weren’t to score again for the remaining 12 minutes or so. Like a boxer on the ropes for an extended period, Cork exploded with a barrage of three points inside two minutes from Orla Finn, Aine O’Sullivan and half-time substitute Sadhbh O’Leary to go five clear with 10 minutes remaining.

Indeed O’Sullivan had a gilt-edged opportunity to wrap up the game when claiming a poor kick-out but somehow she screwed her effort wide when it seemed easier to goal. Fortuitously three minutes later she made full amends when an effort at a Cork point ballooned up in the air and like manna from heaven the ball fell into the welcome arms of O’Sullivan; this time the Beara clubwoman made no mistake to hammer the final nail in the Tipperary coffin at 2-11 to 1-6.

All in all in was a flattering margin for the champions, their two goals coming as a result of a lost kick-out and a piece of good fortune that fell their way. There was still a lot of positivity to take from this home encounter even in defeat for Shane Ronayne’s outfit.

The defence were well led by captain Samantha Lambert with young Lucy Spillane at full-back, Maria Curley and Brid Condon tireless in their efforts. Caitlin Kennedy kicked a superb first half goal to crown a solid performance while Laura Dillon also got through a load of graft around the middle of the park. Aishling Moloney, despite the constant attention of a wary Cork defence, was the game’s outstanding player. 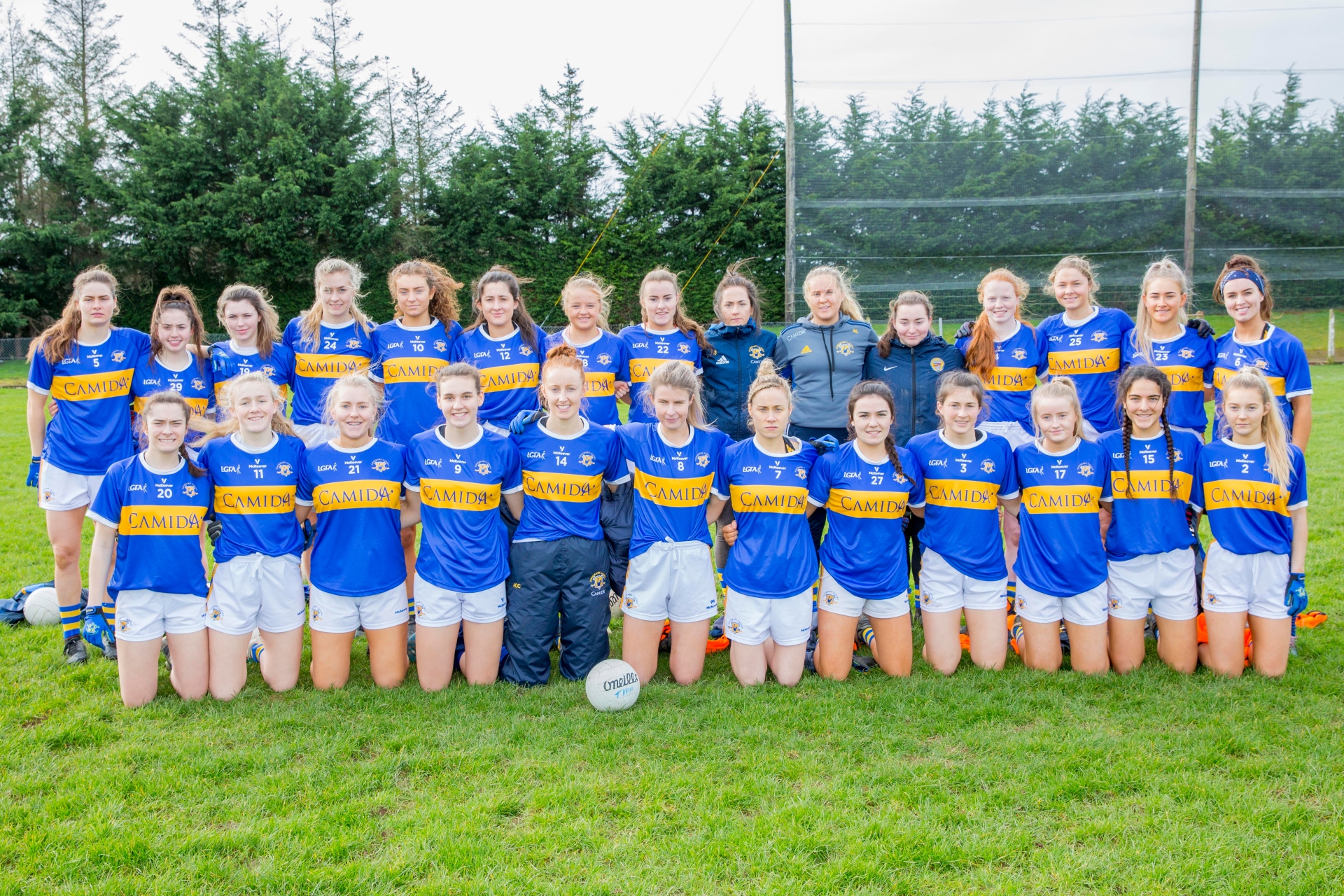