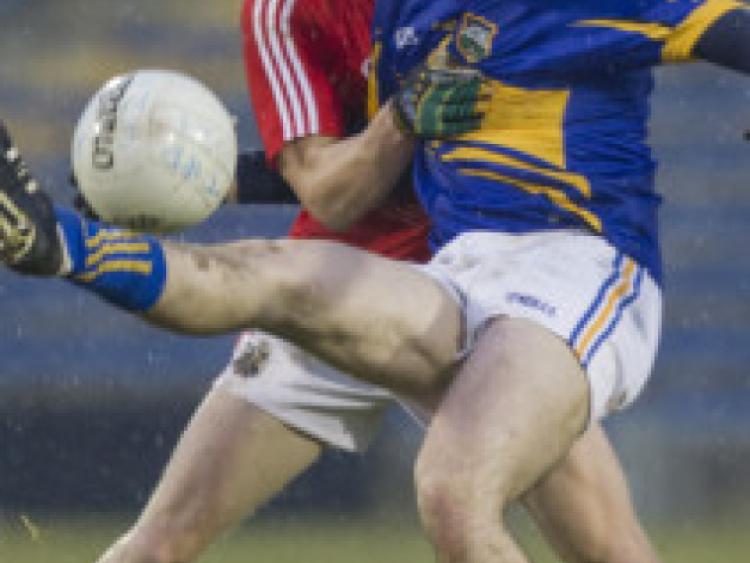 An eleven points drubbing, 1-17 to 0-9, by Cork in the Cadbury Munster under 21 football final at Semple Stadium on Wednesday evening last did not fairly reflect the Tipperary effort, but there was no doubt that the physically stronger and more athletic Leesiders fully deserved their victory, their third on the trot.

An eleven points drubbing, 1-17 to 0-9, by Cork in the Cadbury Munster under 21 football final at Semple Stadium on Wednesday evening last did not fairly reflect the Tipperary effort, but there was no doubt that the physically stronger and more athletic Leesiders fully deserved their victory, their third on the trot.

From an early stage Tipperary were struggling to cope with the pace and mobility of the opposition who surged forward in waves, but still they were in there challenging for their second title, ( their first was in 2010) as the game entered the last quarter.

Then, a Cork break, after Shane Leahy had gone close to netting for Tipperary who were two points adrift at the time(0-8 to 0-10), saw Mark Sugrue round his marker to blast home a Cork goal. Game over – as a now rampant Cork side showed their class with a succession of points, seven to Tipperary’s lone effort from Liam McGrath, in the closing quarter.

The outcome, and the manner in which it evolved, was disappointing for Tipperary. They went into the game with Michael Quinlivan and Liam McGrath carrying injuries, while Philip Quirke and T J Ryan did not start because of injury. This was a major disruption to the side, both psychologically and in terms of match strategy, and the disadvantage was apparent from early on as Cork dominated possession, with a confident and intelligent use of the ball that forced Tipperary on to the back foot.

Five of this Cork side were winning their third Munster medal and against a much younger Tipp side, this experience showed. Tipperary will have fifteen of the squad eligible next year, and while it was disappointing to lose so heavily, the progress being made in Tipperary football continues apace with the next championship an obvious goal for this team and management.

Tipperary’s defence was stretched to the limit by an excellent Cork attack and while Seamus Kennedy, Niall O’[Meara, and Paddy Dalton strove manfully to stem the Cork tide, they were over-run at the finish. Liam McGrath was as industrious as ever in the Tipp attack and took his scores from frees well while Donagh Leahy and Shane Leahy also put in a big effort. Jason Lonergan looked lively when introduced but overall, the display did not reflect the talent in the side. Liam McGrath’s five points came from frees which leaves Tipperary scoring four points from play over the hour, definitely not championship winning form.