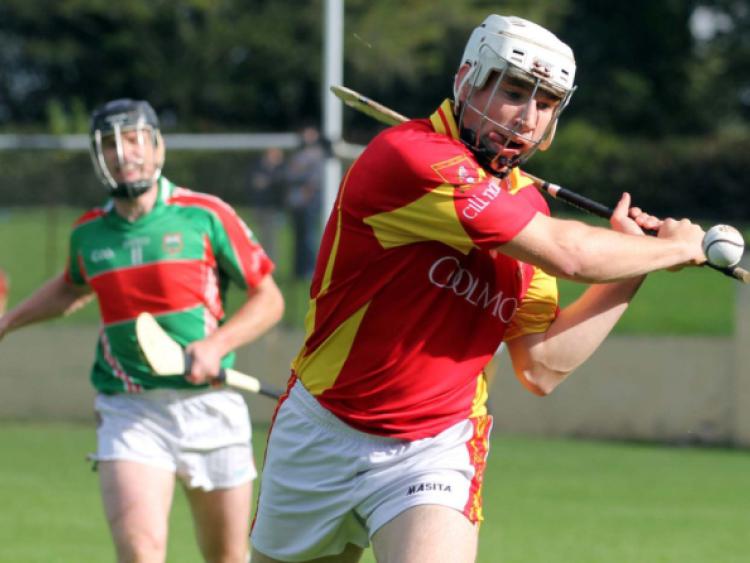 But had they had their full complement of players for the hour, they looked well capable of upsetting the fancied Mid men.

Killenaule were playing much the better hurling, attacking at pace and with purpose in the opening twenty minutes but then things changed dramatically.

Without doubt the turning point of this game was the sending to the line of Killenaule’s former county man, Declan Fanning, following a second yellow card in the 28th minute. The sides were level at the time, 1-5 to 0-8, following an Evan Sweeney goal which undid much of Killenaule’s smart work.

The Killenaule man could not quibble with referee Ger Fitzpatrick’s penalty for a late tackle, and despite the bravest of efforts by the South champions, Loughmore-Castleiney, without ever reaching their best, simply wore them down in the closing stages of a free-flowing and pacey contest.

In the opening twenty minutes, Killenaule’s slick and positive approach unhinged Loughmore and with John “Bubbles” O’Dwyer on his game from placed balls, they moved 0-8 to 0-4 clear. Pat Kerwick blazed wide in the 6th minute when a Killenaule goal was a possibility but Evan Sweeney twice went close for Loughmore, Gerry Kennedy in the South side’s goal saving splendidly in the 10th minute, and a second effort, three minutes later, screaming across the face of the goal after a Liam McGrath shot came off the woodwork.

Evan Sweeney was proving a serious threat to the Killenaule rearguard and it was no surprise that it was he who netted in the 26th minute to level the game 1-5 to 0-8. To add to Killenaule’s woes they lost Declan Fanning to a second yellow card two minutes later, forcing them to withdraw Joe Caesar from attack to fill the number six slot, and though the sides went in level at half-time, 1-6 to 0-9, it was advantage Loughmore-Castleiney who had settled in the closing seven minutes of the half after a poor start.

Loughmore-Castleiney appeared to strike a decisive blow at the start of the second half. Cian Hennessy had a goal effort stopped comfortably by Gerry Kennedy, but, after John McGrath had pointed, Hennessy followed up on a David Kennedy delivery for Loughmore’s second goal in the 34th minute. David Kennedy added a point and Hennessy might have had a second goal in the 6th minute.

Five points clear, it seemed the Mid men were about to turn on the style, but Killenaule showed the quality which won them the South title. “Bubbles” O’Dwyer pointed three frees in three minutes and though Tomas McGrath had a Loughmore point, Killenaule kept coming back, a point from Bubbles and a smashing 47th minute goal from Pat Kerwick edging them ahead.

Exciting stuff, as Kieran McGrath immediately levelled for Loughmore. Could Killenaule pull off a fantastic win against the odds? Not so as Loughmore found an extra gear, and using their numerical advantage to good effect, they reeled off a run of six points without reply in six minutes, for a five points lead, 2-16 to 1-14 with four minutes to play.

Niall Bergin had a goal chance well-saved by Loughmore goalie Shane Nolan in the 57th minute. A goal then and anything might have happened. Cathal Bergin’s 60th minute point still left Killenaule four adrift as the game moved into injury time. John McGrath had the last say, a Loughmore point for a victory, that while predictable after Fanning’s dismissal, involved considerable anxiety.

Despite their disappointment at the circumstances of their defeat, Killenaule have much to take from this outing which must give them great encouragement in terms of their standing in senior hurling circles in the county. Their excellent halfback line of Joe O’Dwyer, Joe Caesar and Kieran Bergin impressed while John “Bubbles” O’Dwyer, Pat Kerwick and goalkeeper Gerry Kennedy were others to shine for them.