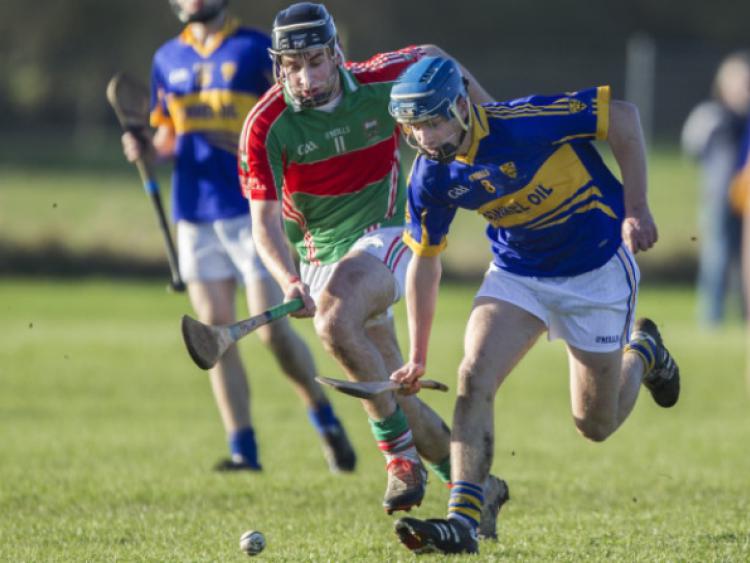 County senior panellist Liam McGrath inspired Loughmore-Castleiney to a six points win over Kilsheelan-Kilcash in the County u-21 HC ‘A’ semi-final at Cashel on Sunday.

County senior panellist Liam McGrath inspired Loughmore-Castleiney to a six points win over Kilsheelan-Kilcash in the County u-21 HC ‘A’ semi-final at Cashel on Sunday.

McGrath was the classiest player on the field, hitting a goal inside the first minute, an even more important one eight minutes into the second half, as well seven points, including a superb one from a sideline cut.

And Loughmore needed McGrath to be at his very best as he was the big difference between them and a totally committed Kilsheelan side.

The South champions put in a huge performance against a highly rated Loughmore who not only included Liam McGrath in their side but cousin John McGrath as well as John Meagher.

Kilsheelan had wiped out McGrath’s early goal with three points over the next ten minutes and were twice level again before finishing the first half strongly to lead by two at the break, 1-6 to 1-4.

They had the advantage of a stiffish breeze but it was no more than they deserved. They fought a more rearguard action in the second half but never gave up the battle, led by an outstanding display from Bill Maher whose roving role had him involved in the action throughout the field.

Liam McGrath’s early goal was the worst possible start for Kilsheelan against the firm favourites but they didn’t let it affect their game plan and Eoin Keogh had their first point within thirty seconds from a Conor Davin Murphy pass. Brendan Martin added a second within four minutes and a great point from Bill Maher had the sides level after ten minutes.

A John McGrath free restored the Loughmore advantage but if anything the South side had more of the play but at least six wides in the first twenty minutes didn’t help their cause. Pointed frees from Bill Maher and Colin Gleeson either side of a John McGrath free for Loughmore left it at 1-2 to 0-5 after eighteen minutes.

Liam McGrath put the Mid side ahead again and then superb defensive play from Kilsheelan was rewarded when they broke upfield and a shot from Bill Maher was caught but fumbled by Loughmore keeper Craig Cleary and it dropped over the line to give Kilsheelan the lead for the first time, 1-5 to 1-3.

A Gleeson free extended the lead but deep into added time a Liam McGrath free made it 1-6 to 1-4 at half time.

Another Gleeson free extended the lead thirty seconds into the second half but there were soon signs that Loughmore were finally finding their way. Pointed frees from John and Liam McGrath reduced the lead to the minimum and while Phil Maher hit back with a fine point for Kilsheelan, Liam McGrath hit the decisive score in the 8th minute.

There appeared to be no great danger when he pulled on the ball on the ground from distance but it went past backs and forwards and goalkeeper Alex Harte may have been unsighted as it settled into the net.

McGrath continued to orchestrate the Loughmore performance as they took control of the game and added five points without reply – two pointed frees from McGrath as well as the score of the game from a sideline cut, a super point from Tommy Maher and a pointed free from Brian McGrath.

Kilsheelan just didn’t have the forward power of Loughmore as most of the second half was played in their half. A pointed free from Colin Gleeson in the 29th minute was their first score in 22 minutes and while he added another in injury time, they were cancelled out by Loughmore’s last two scores from Liam and John McGrath from play.

Bill Maher was outstanding for Kilsheelan but apart from him and Colin Gleeson they didn’t pack any real punch upfront as reflected in just 1-4 from play. But that can’t detract from their endeavour and commitment which pushed Loughmore for much of the game. Eoin Keogh and Paul Maher hit fine points as well as putting in solid displays while Conor Davin Murphy had a fine game at the heart of the defence.

Liam McGrath was undoubtedly man of the match, with a personal tally of 2-7, while he was also ready to help out in defence when needed. He had good support from John McGrath, Brian McGrath, John Meagher, Lorcan Egan and Joseph Hennessy.