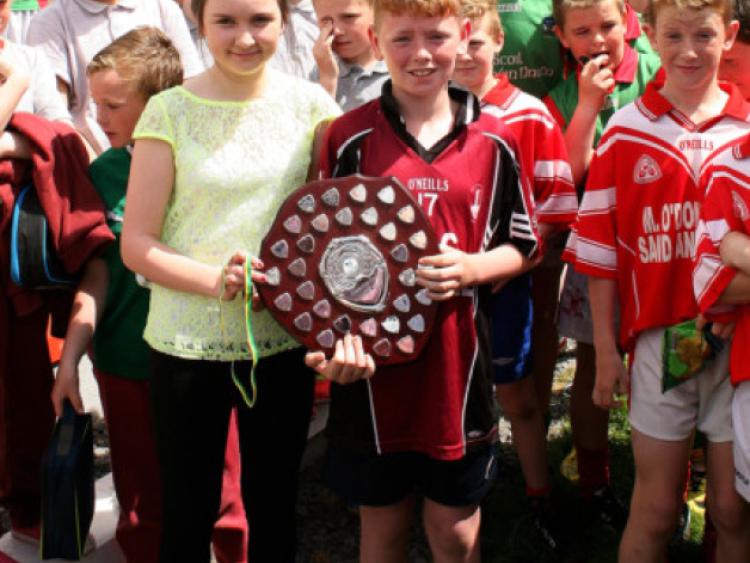 Corville NS, Dromakeenan NS, Scoil Eoin S. and Sacred Heart Convent served up some competitive matches with no shortage of skills on show.

All teams played against each other with Corville and Scoil Eoin qualifying for the final. After a very competitive first half Scoil Eoin took control of the game and ran out comfortable winners. It is the second year in a row that Scoil Eoin have taken the honours so many congratulations to them. The Liam Carson Memorial Shield and medals was presented to the winners by Liam’s grandaughter Danielle Carson who also presented medals to the players of all schools. All the teams must be applauded for their efforts on the day. Inane would also like to thank the teachers for the work they are doing with their pupils. We would also like to thank referees Philip Bergin and Stephen Kenny and our sponsors Bernies SuperValu for providing refreshments on the day.

In other news Inane would like to congratulate Darragh Tynan and Brian Parlon who recently represented Inane on the Tipperary under 14 team that played in a Munster blitz in Cork. On a sadder note we wish to sympathise with the Pyne family on the untimely passing of Birdie. A staunch GAA supporter especially Inane she will be greatly missed. Ar dheis de go raibh an anam.

Meanwhile, the annual Kelloggs GAA cul Camp takes place in Roscrea Hurling Club from Monday the 14th of July to Friday the 18th of July. All children aged between six and 13 years are welcome. For further details, contact Fiona on 086 1698588.