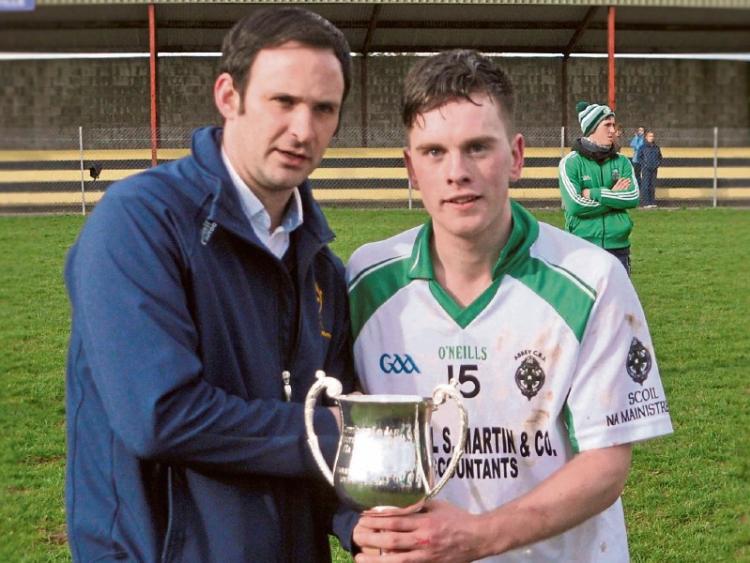 A dominant display by the Abbey CBS, Tipperary, earned an impressive third Munster Colleges’ senior hurling ‘B’ crown at Ballyagran, County Limerick, on Thursday last where Mitchelstown CBS were comprehensively outplayed in the Munster final.

What was expected to be a tight-run affair developed into a dashing display by the Abbey lads who dominated especially in the opening and final quarters to hammer out an impressive thirteen point verdict.

A two-goal salvo by man-of-the-match, Shane Neville; impressive second-half free taking by Riain Doody; and staunch defending throughout were among the key features of an Abbey win that sends the school forward to an All Ireland semi-final against Leinster opponents on March 12.

The Abbey put their stamp on this game in the opening quarter. Attacking the match tigerishly they had Mitchelstown on the back foot from early. An opening Shane Neville free settled nerves and that was the prelude to a period of Abbey dominance. They reeled off points by Riain Doody (two), Shane Power, Josh Ryan (free), Shane Neville and a mighty one from Caolan Hennessy against a solitary Cathal O’Mahony reply for the Cork side.

Those scores set up a seven-one lead for the Abbey in the opening quarter and then their supremacy was endorsed with the game’s opening goal. Kieran Breen delivered a lob goalwards and when the ball broke Shane Neville was in like a flash to finish to the net. Approaching twenty minute the Abbey led by 1-8 to 0-2 and the Anthony Nash coached Cork side looked to be in deep difficulty.

To their credit Mitchelstown didn’t panic and came more strongly into the game with centre back, Colin English of the Fr. Sheehy’s club in Tipperary, to the fore. With Cathal O’Mahony excellent on frees they pared back the Abbey lead to seven-up by half time, 1-9 to 0-5.

With the breeze to aid them on the turn over it was certainly not a done deal for the Abbey at this juncture.

In fact early in the second half Mitchelstown continued their progress with tall full forward, Mark Keane, proving a handful on the aerial ball. Keane pointed twice from dangerous positions and by midway through the second half the Abbey lead was cut to a mere four points, 1-11 to 0-10.

However, that was as close as Mitchelstown got. Riain Doody took over the free-taking duties for the Abbey and showed great nerve to hit a string of crucial points for the Tipperary school. Those flags were critical in undoing the Mitchelstown progress.

Then in the final phase of the game the Abbey put on a powerful encore led by Shane Neville. First the county minor took a pass from Shane Power to beat a number of tackles before planting his second goal. Then the scorer turned provider, this time opening up the Mitchelstown defence before laying off to substitute, Cormac Maher, who supplied an excellent finish for the school’s third goal.

This time there was no way back for Mitchelstown who were fourteen adrift at one stage, crucially failing to get through for a reviving goal. For the Abbey though there was a sting in the tail as influential centre back, Josh Ryan, was red carded near the end and will now miss the All Ireland semi-final.

Overall it was a hugely impressive win for the Abbey who previously took this crown in 2002 and 1992, on both occasions proceeding to All Ireland glory. Their defence, led by Josh Ryan, hasn’t conceded a goal in the last three knock-out games of the competition which is a tribute to their collective tightness and tenacity. On this occasion Kieran Breen was the star performer at midfield while in attack Shane Neville led the way with crucial inputs also from Riain Doody, Shane Power and Niall Heffernan.

For Mitchlestown it was a disappointing exit after the thrills of their one-point semi-final win over Colaiste Chriost Ri. The injury that deprived them of attacker James Keating was no help, though players like Colin English, Mark Keane and Cathal O’Mahony could not be faulted for the failure.

The Abbey now await the winner of Scoil Mhuire Johnstown and Ardscoil Ris from Dublin in the All Ireland semi-final on March 12.