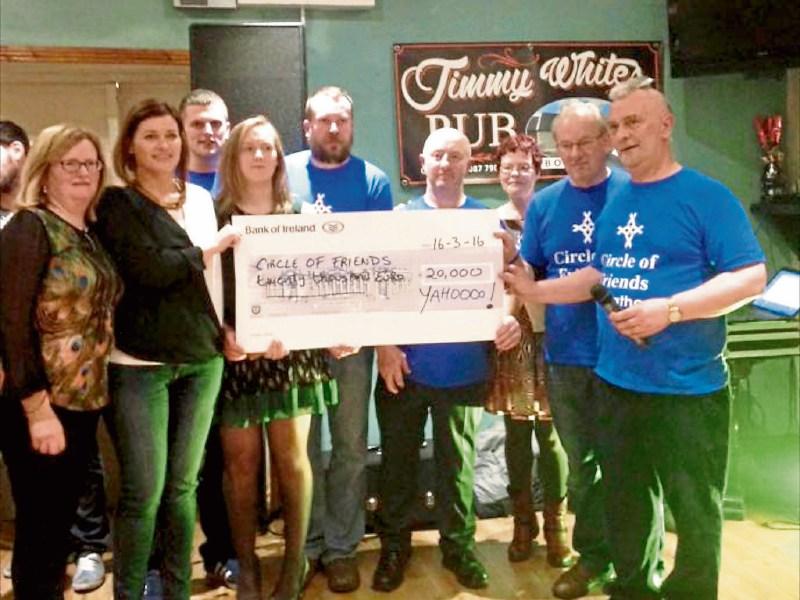 A fantastic and incredible €20,000 was raised at Circle of Friends Cancer Support Centre Shavathon by family, friends and supporters of the thirty one men who took part in the charity fundraiser.

The participants came together at the end of January and made a commitment to grow their hair and beards for sponsorship to raise funds for the Circle of Friends.

The finale took place on March 16 in Jimmy Whites Bar, Bohertrime, with the bunch of very hairy men lining up to be shorn and shaved in what was a fantastic atmosphere of celebration with local entertainer Willie Bun leading the frivolity.

Johnny and Judy O’Brien from Ballinulty in the parish of Sologhead organised the fundraising events with Johnny also growing out his hair and beard. The couple tragically lost their daughter Linda in February 2012 and Judy found great solace with bereavement counseling at the Circle of Friends Cancer Support Centre. “I’ve been going in to the Circle of Friends for counseling and treatments and I always get good out of it. However bad I would feel going in, I would always come out feeling different.

I didn’t realise that the Circle of Friends did bereavement counseling as well as other treatments. At Christmas Johnny and I decided to give something back and so we organised the Shavathon fundraiser.”

The finale took place in Jimmy Whites bar in March that also included a fantastic raffle and auction that included: a Tipperary Hurling jersey and Hurley signed by the Tipperary team; an Ireland rugby jersey signed by Paul O’Connell; a jersey signed by Rugby World Cup referee Johnny Lacey; and a trailer of timber donated by Pat and Hilda Franklin.

Catriona Molloy from Circle of Friends says - “Fantastic credit is due to all the participants who raised funds by growing their beard or hair and allowing the hairdressers on the night to shave it off. We would like to extend our huge gratitude to Johnny and Judy O’Brien who worked tirelessly organising the event. Thank you to all the participants and people who sponsored them and to Sara Lynn hairdressers who gave their time on the night. The money raised will go towards the new building of Circle of Friends Cancer Support Centre in Knockanrawley, Tipperary town and we are absolutely thrilled.”

Organiser Johnny O’Brien also organised a fundraiser in 2011 raising €21,000 for the South Tipperary MS Society that helped create the society based in Clonmel.

He was delighted with the support. “We are incredibly grateful to all those who supported the events for Circle of Friends. Thank you to all the participants and those who sponsored them. Eighty sponsorship cards came back full and I’d say there wasn’t a door left unanswered in the entire parish of Sologhead.”

Thank you to the Shavathon committee: Niall and Joanne O’Callaghan, Liam Kiely, Margo and Phillip O’Doherty and Catherine Sheridan and all those who donated prizes for the raffle and auction.