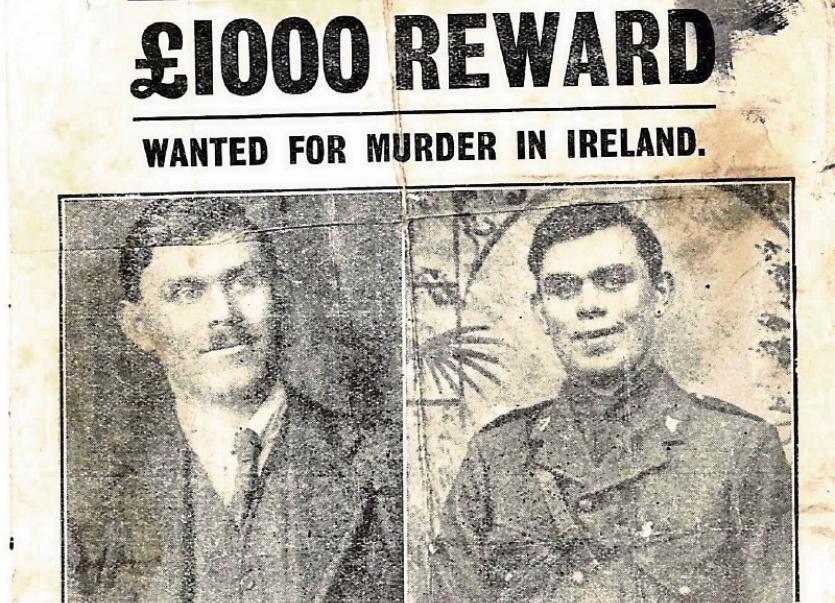 Items of historical interest will go up for auction at the Fonsie Mealy Auctioneers Centenary Sale, which will take place on Saturday 23rd April, in the particularly apt location of The Gresham Hotel, O’Connell Street, Dublin, an area that played witness to much of the Easter Rising’s events.

The sale, which comprises over 600 lots, will include items from the 1798 Rebellion, the Fenian Rising, signatories of the 1916 Proclamation, a wide variety of signed books, manuscripts, correspondence , archives, medals and other artefacts.

Among the items are ones of significant Tipperary interest.These include Lot 162 - The Cashel Volunteers - A very good photograph of Volunteers on manoeuvres in the Main Street, Cashel, c. 1915, with Na Fianna also on parade, together with Bicycle Corps, Motor Cars, and onlookers, etc.

Lot 186 - Wanted For Murder Printed Poster: A “Wanted” handbill for Daniel Breen, 1920, “Calls himself Commandant of the Third Tipperary Brigade” offering a reward of £1000 * Dan Breen first came to prominence in 1919 at the Soloheadbeg Ambush, which marked the beginning of the War of Independence. With his friend Sean Treacy he took part in many significant engagements. He opposed the Treaty but tried to avert civil war, and later was a long serving T.D. for Fianna Fail.

Lot 464 - Through the Ivory Gate. A Book of Verse, Dublin (for the author), Sealy Bryers & Walker (1902) - Joseph Mary Plunkett’s copy with his faint signature dated 1909 on f.e.p., and inscribed to him on rear blank by Mac Donagh with a quotation from his poem ‘The Golden Joy,’ dated 21.5.9. Laid in is a purple arm band with a religious motto. A superb association copy linking two executed martyrs of the 1916 Rising, both signatories of the Proclamation.

Lot 653 - a very rare gold medal from the ‘Bloody Sunday’ First Anniversary GAA Tournament (1921) commemorating those who had fallen victim on that infamous day.

A particularly prominent item is an original copy of the 1916 Proclamation of the Irish Republic, which is by tradition reputed to be a copy which hung in the General Post Office in Dublin during the 1916 rising.