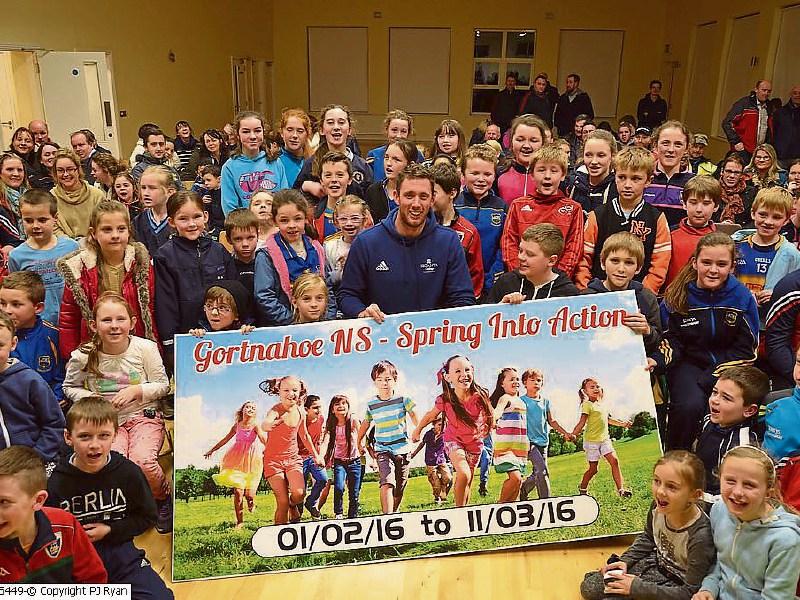 In February 2015, our school organised a six week running programme for all children from 1st to 6th class which culminated in a 3km run.

This programme was initiated in response to our concerns regarding levels of fitness and stamina among the children. Last year surpassed all expectations and was a resounding success.

This year we decided to further develop the programme to include broader aspects of children’s health and general well-being. A senior class debate highlighted the concerns of some students about their lack of physical exercise, stress caused by homework and over exposure to screens. This coincided with an increased national awareness regarding nutrition and physical exercise.

As a school we decided to suspend formal homework during the six week programme to encourage all the children to be more focused on the importance of being active in the evenings with their friends and family. It was decided to expose the children to a broad variety of physical activities to open their minds to new possibilities regarding exercise. In order to increase the children’s daily physical exercise, we had P.E. every day (irrespective of the weather) for the six weeks and the timetable included three days running every week and a selection of activities on alternate days which included; Hip Hop Dancing, Boxercise, Taekwondo, Yoga, Gymnastics, Agility, Balance and Co-Ordination (A.B.C.) sessions and Irish Dancing.

We named our programme “Spring into Action” and it was launched on Monday night, the 1st of February with a talk from Michael Fennelly, Kilkenny senior hurler who lectures in nutrition and coaching in Setanta Sports College, Thurles. There was great support on the night with a large attendance from parents and children. Michael’s approach was very personal and as a result very effective. Michael’s talk on nutrition was inspirational and the effects were far reaching. It was evident that there was an immediate, positive impact on children’s food choices e.g. the importance of eating breakfast, choosing brown bread instead of white, porridge instead of processed cereals and water instead of juice. Michael also emphasised the importance of introducing healthier options particularly fruits and vegetables. After a question and answer session Michael presented all the children with a pedometer (kindly sponsored by a local business) which they used on a daily basis to track their steps.

On Friday the 11th March, the last day of the programme the entire school went to Templemore where all pupils from 1st to 6th ran 3km on the track. The infants ran one lap and then went for a walk around the lake. The ease with which the majority ran the 3km was a pleasure to watch. A large group of parents and relatives were there to support the children. All the children had collected sponsorship for their efforts and a total of €3550 was raised for Trócaire. A cheque for €3550 was presented to Fr. Joe Walsh, the Diocesan representative for Trócaire.

‘Spring into Action’ was a tremendous success and all the following were noted by the teachers involved:

- Almost all children engaged enthusiastically with the programme and showed an immediate desire to increase and record their levels of activity using their pedometers.

- All pupils improved their levels of fitness and stamina.

- The visiting instructors stimulated an increased level of interest in trying new activities.

- There was a general buzz and an atmosphere of excitement around the school for the whole programme leading to improved relationships.

A questionnaire was distributed to all parents and the feedback included the following:

- Request for the running to continue in some format

- A significant increase in the amount of time spent being physically active as a family.

As the programme was deemed to be highly beneficial to all involved it has been decided that the programme will resume next year with some modifications.A big thank you to all the parents for their co-operation, support and enthusiasm throughout the programme.