'Outpouring of affection, appreciation and pride' as Clonmel unveils monument to memory of its 43 Volunteers of 1916

Permanent tribute to memory and idealism of Clonmel Volunteers 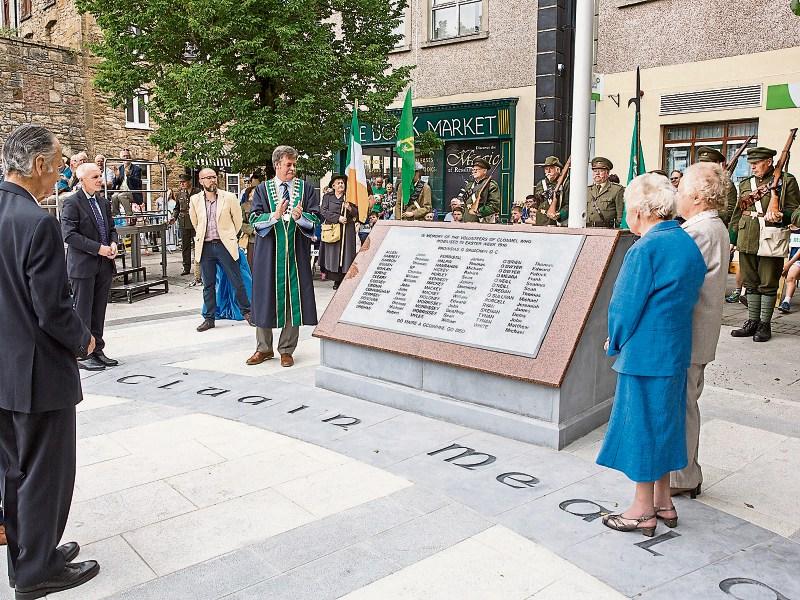 It is hard to imagine how the people of Clonmel could have honoured the town’s 43 Volunteers of 1916 in a more fitting fashion than the event that unfolded on the June Bank Holiday Monday.

The occasion, which began with a parade through the streets of the town, starting from the site of the former seminal Drohan’s Coachbuilding Yard in Irishtown and culminating with a formal ceremony at the Borstal Gates, captured the mood of the occasion perfectly.

The citizens of the town came out in their hundreds on a fine summer’s day and, guided by the leadership of the organising committee, (Coiste Spiorad 1916 Chluain Meala), remembered with much pride and no little passion, the selfless contribution of the Clonmel Volunteers of a century ago.

The highlight of the ceremony was the unveiling of a magnificent new monument at Emmet Street, in perpetual memory of the 43 Volunteers who stood ready at the time of the Easter 1916 Insurrection.

The unveiling was performed by the Mayor of Clonmel and Cahir Borough District, Cllr Pat English, who in his words said “the memorial unveiled today will represent this town’s appreciation of the willingness of so many of its young men of a century ago to risk their lives in the cause of freedom.”

The day’s proceedings began from Irishtown with a march headed by Banna Chluain Meala, Sean Treacy Pipe Band, the Defence Forces, O.N.E., Boy Scouts, the Enniscorthy Re-Enactment Group and a multitude of GAA clubs marching behind their colourful banners. Each Volunteer’s name was carried individually through the streets of the town by a pupil of St. Mary’s CBS.

At the Workmen’s Boatclub at Irishtown, of which so many of the Clonmel Volunteers had an association prior to 1916, the march halted for a wreath to be laid.

Later from a specially constructed stand at the plaza in Emmet Street, the MC for the day, and chairman of the organising committee, Con Hogan, welcomed all present stating “It is our wish that this monument will stand in permanent tribute to the memory and idealism of those Volunteers and all who fought for Irish freedom during that momentous week in Irish history 100 years ago in 1916.

Following addresses from the chairman of Tipperary County Council, Councillor Seamus Hanafin and Clonmel’s Mayor, Pat English, the Proclamation was read with poignancy by Cmdt. Gerard Deely, a native of Clonmel and a member of the Irish Defence Forces.

At a full military presentation, two wreaths were then laid at the monument by Tom Stafford, President of the Organising Committee, and by Carmel Drohan and Una Power, nieces of the Comm-anding Officer of the Clonmel Volunteers, Frank Drohan. A minute’s silence was then observed in memory of the Men and Women of 1916.

Seamus Leahy, whom Labhrás O Murchú would later pay tribute to at the start of his oration, called out with passion, to a respectful silence, the names of each Volunteer, his voice echoing back in the enclosed area.

Mr Leahy began “The names which I am about to read are the names of the real pacifists of their time. They were prepared to risk their young lives in support of the Dublin insurgents so that their children and ours might live in peace and that forever might be ended the horror of Irish manhood dying by the thousands in the wars of empire. The walls of this old town may well echo their names with pride.”

The keynote oration was delivered by Director General of Comhaltas Ceoltoiri Eireann and former member of Seanad Eireann, Labhrás O Murchú, who also unveiled the plaque in its original form at the Town Hall in Clonmel 25 years ago.

Mr O Murchú, in a wide and thought-provoking oration, praised the honour of the men of 1916 but also praised Ireland of today for honouring them suitably.

“Two years ago when it was being discussed people thought that wouldn’t happen. The reason it has happened is that at all times the Irish people always wanted to show that they appreciated the sacrifices and the efforts which were made on their behalf. Because bear in mind it was on their behalf it was made, not on behalf of the participants, and today our nation and our state can hold its head high amongst the nations of the world.”

The event concluded with the playing of The Last Post and finally, the national anthem, Amhrán na bhFiann.