Students cheer on the boys in green 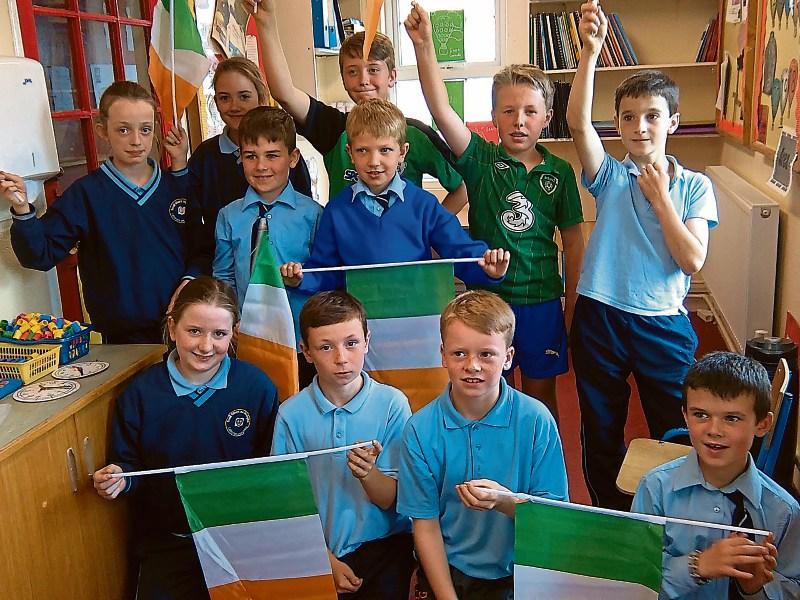 There was no shortage of encouragement and advice from the pupils of Gortnahoe NS on Thursday morning following Ireland's magnificent win over Italy on Wednesday.

"Keep the same team line out and make sure to work together," says 5th class pupil Liam Hayes.

"Don't be afraid to take the shots and go for goal," adds Damien Corbett.

"Keep the same possession of the ball and keep the pressure on at all times. We had good control of the ball at midfield so they need to keep that up. They looked like a brave and confident team on the pitch," agrees Bobby Doheny.

And the students were also very positive about Ireland's chances on Sunday with 2nd class student Michael Campion telling his classmates to "keep it positive." "I think we can win the next game if we work together like we did against Italy," he says.

"Yeah, we shouldn't be negative about the next match. We have to cheer them on and give them our support," offers Bobby.

Another mini debate among the students ensues with pupils discussing the benefits of defending as a unit and what French players may create trouble for the Irish side.

"Griezman and Kanté would need to be marked very carefully," advises Liam.

The Tipperary Star paid a visit to Gortnahoe NS and Shane Long's former school this week following Ireland's one nil win over the Italian side and met some of the pupils who were eager to give their advice to the Irish team.

“Shane was brilliant in the match and I really enjoyed seeing him play,” said Shane’s cousin Jack Flanagan proudly.

“From a young age Shane demonstrated great ability both in the sporting field and academically. He was in the first class I taught when I came to the school in 1993,” recalls Principal Derek O’Brien.

“I remember one standout moment when the school was playing an U12 match against Grangemockler. The goalie pucked out the ball, Shane glanced back, turned and with his back to the goalie caught the ball in his left hand mid air. One quick swing sent it over the bar. I’ve only seen that happen once before with Declan Browne. His skill level was unprecendeted, he just has a natural instinct,” he says.

"We all want to play for Ireland some day," says 5th class pupil Bobby Deheny. And Mr O'Brien agrees that it is could be possible to see another former pupil don the green jersey.

"Every student here is involved in sport and we had a very encouraging school fitness programme at the school earlier this year. There are pupils here who are putting in as much effort as Shane did so it's very possible we could have even more future sporting stars from Gortnahoe NS."

And the school are also celebrating their viral youtube hit the 'Shane Long Song' which has amassed over almost 25,000 views since it was uploaded on June 7. The up tempo number, which has also been getting radio airplay, The song was written by well known Tipperary singer Johnny B and recorded live at the school with a 120 pupil choir as a tribute to former '1999 Gortnahoe Pupil of the year' Shane Long and also features Shane's nephew Eamon who is a fourth class pupil at the school.

The driving force behind the project was "super-sub teacher Monica Griffin" said Principal Derek O'Brien ahead of Ireland's first game at the Stade de France. "Ms Griffin was fantastic in getting the whole thing off the ground as she contacted Johnny B and the whole thing took off from there. We wanted to do something to mark the occasion and decided to write a song with all pupils in the school getting involved,” said Mr O'Brien.

And since recording the song Euro mania has taken over the school with all of Gortnahoe turning green. "There's a fantastic buzz in the school and it's tantamount to the enthusiasm of pupils, staff and parents," said Mr O'Brien who added that he hopes the song will become another great memory for the current 6th class of their time at Gortnahoe.

"We are very grateful to Star Systems for producing the video for us. And we are also grateful to the parents and friends of Gortnahoe who supported our cake sale and raised enough money to cover the cost of the video. All the staff are very proud to be connected with Gortnahoe parish and the wider community."

“Win, lose or draw we hope to get Shane back to the school and perform the song for him. He's a great role model for young people and a great ambassador for Tipperary,” he added.