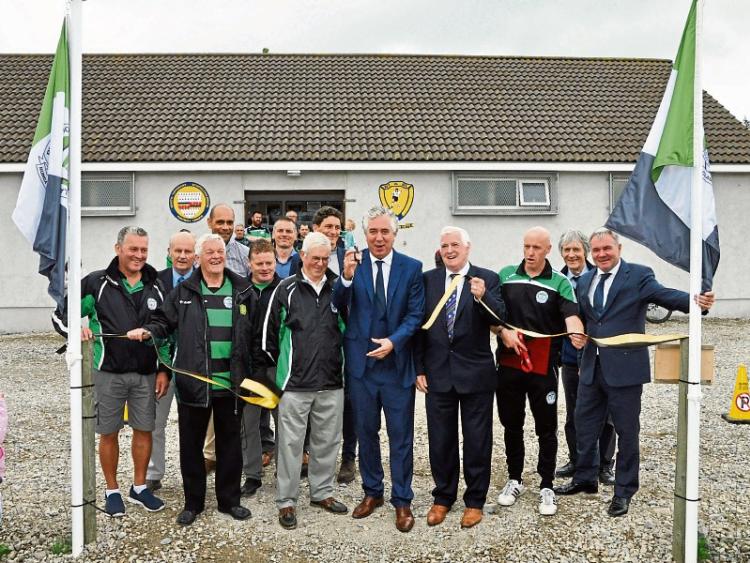 Now that the dust has settled it is time to reflect on the Official Opening of Clubs Grounds.

What a day, the Club pulled out all the stops, three projects were unveiled, the Club House, Grass Pitch and the Astro-Turf pitch.

The delegation from the FAI which included CEO John Delaney, President Tony Fitzgerald, Ex-Internationals Ray Houghton, Keith Andrews and players from the women’s International team, all were suitably impressed.

There was a great turnout for the event and for some it was their first time at our grounds and they too were in awe of the work done. The Club was only formed in 2012 and there has been a lot done since then, but we can’t take all the Credit. It was Blackcastle Utd (formed 1969) & Templemore FC (formed 1984) that got us to this juncture. Since the formation of BT Harps over €300,000 has been spent on the grounds and it couldn’t have been done without the support of the people of Templemore and it surrounds.

A lot of work went into Monday's event and many people need to be thanked, the catering, food and drinks which were provided by Francis Murphy, Mossy Shanahan, Cuilan Loughnane, Jamie Groome, Brid Brophy, Dick Kennedy, Caroline Breen, Declan Collier and the tea-ladies Maria Stapleton, Catherine Foy and Trish Ryan. The parents for the Cakes & Buns. The PA system which was supplied by Myles McMorrow, Anthony Marnell for parking facilities. And a big thank you to all the Club members who rolled up their sleeves on the day and the days leading up. We often give out about the players but they weren’t found wanting, some of our teenage players looked after the kids Blitz. The committee which hasn’t changed since the Club was formed have worked tirelessly to develop the Club. Jim O Shea (chairman), Larry Stapleton (Sec/pro), Billy Fennell(treasurer), Paddy Fennell (vice chairman/child officer), Henry Newman (Jnr sec), Jimmy Carroll (sch children sec), Michael Taylor and Miah Sweeney. I don’t like to single anyone out but I have to mention one person, who was hands on in all three projects, Club House, Grass Pitch and Astro-Turf Pitch dealing with Builders & Contractors, not an easy job, Henry Newman did Trojan work. And he was also to the fore in the general clean up on site for the opening, but he only sprung into action last Friday when he heard Larry Stapleton was on his way home from his holidays. I hope I haven’t left anyone out; it’s onwards & upwards for the Club. Please view our Facebook page to view the many pictures taken on the day.

Just a reminder re the Clubs Presentation night, Tuesday the 16th of August at 7pm in the Templemore Arms, Players of the year etc for U12 upwards. The Club is about getting teams on the field, boys and girls of all ages playing football and if silverward comes well that a plus and this year Silverware did come. League Titles, Cups, Shields and even history being made in some cases. It’s another open invitation for the people of Templemore & surrounds to see how soccer is progressing in the area. We have a large number of kids in the academy section, they already had their presentations on the day of the McCullagh Shield but they too are welcome, it’s a big Club so this night is a chance to get everyone together from the Club. So much going on off the field but on the field the Juniors are playing away with three games this weekend.

The B-Team had a double header against Borrisokane, first up was Friday night in the Shield, Harps felt they should have came away with something, at 1-1 had a chance to win it but for a great save from a penalty. And when it looked like penalties the visitors snatched it, so first blood to Borrisokane. Harps goal from Jamie Morrissey.

Next up, Sunday morning in Borrisokane with a league fixture. Again we had the same scoreline 2-1 but a different winner, Harps took all three pts with goals from Jamie Morrissey and Brian Roche. Three wins out of three for the boys in the league, well done lads.

The A-Team were also out at the weekend in the Joe Delaney Cup, a competition between the top 4 teams in North Tipp and the top 4 in the South. Harps had a tough fixture away to Clonmel Celtic but the visitors were not fazed, the first period was evens and as halftime approached the deadlock was broken. A 20 yard screamer from Steven Quinlan. The second period follow the last, 50/50. Sean Paddy Guerin came close to sealing victory but for a goal line clearance. Then at the death a well worked move by the homeside ended in an equaliser. Worse was still to come, when penalties loomed, another goal for the homeside. A cruel game, with a famous Harps Victory in sight it was cruelly snatched at the death. But in the coming days when the lads reflect on the game they can take a lot of positives going forward into the season. On the day best for Harps were Sam van Dam, Cathal Scully and Sean McCormack.

Regarding the Schoolchildren’s League, the League AGM is next week’s so it won’t be long before their season kicks off. As stated earlier, the Club wants teams on the field but to do that we need help, help at all ages, that’s from U8 upwards. We all started somewhere and I haven’t met anyone yet that has regretted getting involved.