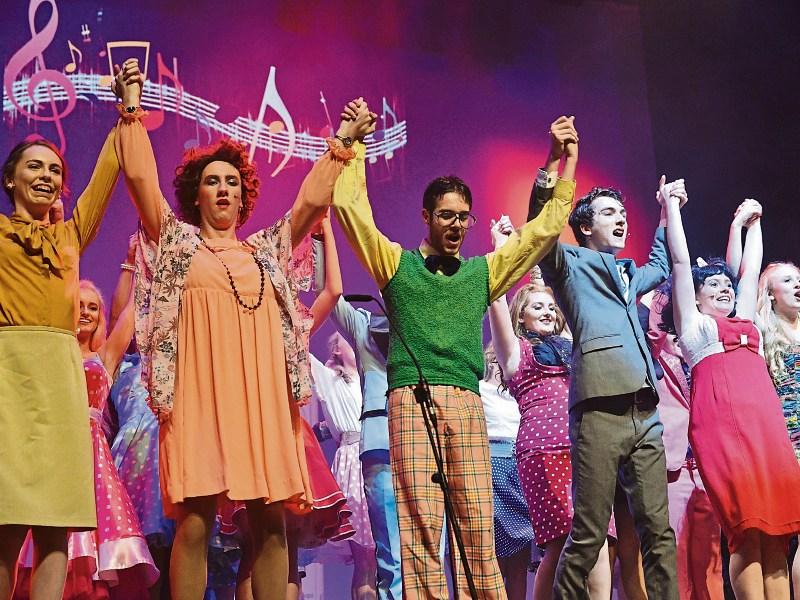 The Youth theatre had a lot to live up to after last year’s amazing debut production of Les Mis but this fantastic group of young talented performers did not disappoint at all with deserved standing ovations each night.

Eoghan Ryan gave a standout laugh-a-minute performance as Tracy Turnblad’s mother Edna. Each time that young man stepped on stage you started laughing before he had spoken a word. Eoghan's comic timing was perfect and magic was created when he coupled with another talented comic actor Cormac Maher playing Eoghan’s husband Wilbur Turnblad. One of the highlights of the show was a duet performed by the two of them.

Another lead character Tracy Turnblad, was shared by two amazing singer/performers Orla Purcell and Mary Condon O’Connor. Both talents never waivered throughout this demanding role and their commitment and love of performing shone through.

Playing the not-so-likable character Amber Von Tussle was Bethany Entwhistle and Nicole Butler. Well-done ladies, you sang, stomped and performed this role with great talent and conviction, as did talents Saoirse Murphy and Sadhbh Brennan in Amber’s mothering role of Velma who captured and performed the dramatic, over the top greedy character to perfection.

Alisssa Keating and Hannah Dawson shared the ditsy role of Penny Pingleton to perfection making the character believable and lovable and what a steady, solid fun performance by Ritchie Crowe and Shane O’Donovan as Corny Collins. The romantic pop-star role of Link Larkin was played by crooners Riain Cash and Tadgh O’Connor who sang beautifully and showed the character’s journey from self-absorbed pop star to a humanitarian with great comic and acting skills.

Another joy in the show was the amazing soul voices of Maria Magner and Agnes Lamb in the role of Motormouth Mabel. Their singing would make you stop whatever you were doing or thinking and pay-attention with pleasure. A highlight visually and musically was when Motormouth Mabel sang a heart-rending song, “I Know Where I’ve Been’, with the support of the chorus all holding candles.

Great credit must be given to the chorus and dancers who raised the energy levels and fun-factor each time they came on stage. The chorus generously enhanced and supported the lead performers and their dance routines were faultless. Every performer on stage gave it their best and their best was fantastic - soaked up and appreciated by the audience.

The production of Hairspray was Produced/Directed and Choreographed by Michael O’Donoghue, Musical Director Pat Marnane and Choral Director Fran Garry Marnane who did a magnificent job bringing out the talent in these young performers. A show like this, performed to such high standards, does not magically appear without a super back stage team. Well done to Clare Murray and Ciara Smith for the super choreography and congratulations to the stage management crew for faultless scene changes and to the back stage team of costumes, hair & make-up and set design.