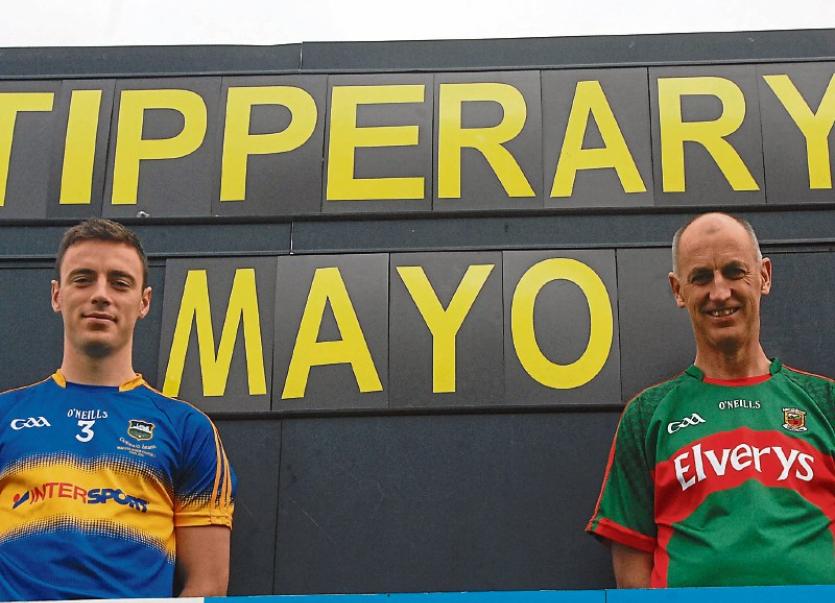 In life it is sometimes said “Be careful what you wish for,” and it seems the same pertains in sport, for one man at least, regarding next Sunday’s All-Ireland Senior Football Championship Semi-Final at Croke Park.

Tommie Campbell, a native of Charlestown in County Mayo, who since boyhood has travelled the highways and byways of Ireland in support of his beloved county, will find himself for once shouting against Mayo on Sunday next.

And the reason is simple, Tommie’s son, 24-year-old Tipperary defender Alan, will be lining out in the “Blue and Gold” of his dad’s adopted county. For one day - and perhaps the only day in his life - Tommie will have to put aside his “Green and Red” and understandably shout for Alan, a Dublin-based software engineer, as Tipp strive to reach the county’s first All-Ireland final since 1920.

Tommie made his way to Tipperary as far back as 1988 when commencing work as Farm Manager in Sidney Watson’s Ballingarrane Estate just outside of Clonmel.

He recalled: “I came to Clonmel in August or September of 1988. I was farm manager in Watsons at Ballingarrane until the estate was sold around 2001. Since then I have been managing a veterinary practice in Cahir - Cahir Veterinary Clinic.”

I asked Tommie about his own club back home and his football background.

“Charlestown Sarsfields would be the local club but my own football was ‘ very harmless’. Whatever football Alan has, he got it from his mother’s side (Patty). Her family are a big GAA house much more so than mine,” said Tommie, adding that Alan’s mother won an All-Ireland Ladies Football senior club medal with The Heath (County Laois) back in 1986.

Many in Tipperary will be surprised to learn that Tommie Campbell isn’t one of our own (not yet anyway) considering that he has been so involved in GAA matters in the Premier County over many years now.

Like all Mayo GAA supporters since 1951, Tommie has been desperately waiting for the Sam Maguire to return back across the Shannon.

“I have been at so many matches, almost them all in Croke Park certainly, and I have been following Mayo in the league stages as well. Since Alan started playing, not as much, but I would have followed them most weeks in the league and certainly all the championship matches in the five Connacht counties, in The Hyde, Markievicz Park, the lot. I was at the five Connacht title wins. Yes I would be an avid follower of Mayo all my life.

“I have been at all the Mayo All-Ireland finals since 1989. In fairness Moyle Rovers have always been very good to me. Donal Foley was great, particularly when I came first, for getting me tickets for the finals. The late Mick McCarthy was great too, they never saw me wanting for a ticket. Michael Power of Newcastle often came up with a ticket also,” added an appreciative Tommie.

“The best match I was ever at was the All-Ireland semi-final replay between Mayo and Kerry the year before last. They played in Croke Park the first game and the replay was moved to Limerick. That was some match, it went to extra-time. That now and 1989 were the two best matches for me (Mayo lost that final to Cork). That was a great match too but for me the best-ever was the game in Limerick even if we lost to Kerry after extra-time.

“Dublin beat us last year in the semi-final - and that was a draw as well the first day, and that was another great game. But we’ve lost them all. We’ve lost finals now to Cork, Meath, Kerry (three times), Donegal and Dublin. I’ve been at them all. I know, it is hard losing them all,” said Tommie throwing his eyes up to heaven.

“The interesting thing is that over the years I brought the lads (Mark, Caitriona and Alan) when they were small to the matches and as they grew older they said ‘No, we’re not going, we’re not going to see Mayo getting beaten again.’ There was no persuasion to get them to go.”

Laughing Tommy said: “They just wouldn’t come with me anymore. Couldn't get them to come. But they’ll need no persuasion to come to this one” (v Mayo).

“I was at the qualifier between Tipperary and Mayo in 2002. I wore my Mayo jersey to that one. I wasn’t fully ‘Tipperary-ised’ what would you say, at that stage. Tipp gave us a fair ould run for it that day,” he said.

I put it to Tommie about Sunday’s game and was it win-win or can’t win for him.

“Listen more than anything I want Tipp to win, of course, that goes without saying, but when the result is over, if Tipp win obviously I will be thrilled. But if Mayo win we will be disappointed for Tipp certainly. But, will I be looking forward to an All-Ireland final I ask myself. Yeah, I probably will. And dreaming the dream all over again but please God it will be Tipp.

“My sisters too - all scattered to the four corners from Mayo - will be shouting for Alan on Sunday. My eldest sister Anne (the others are Attracta, Paula and Joan), follows them very closely with me. She would be the most involved in it and she can’t wait for Sunday. I think she even has a half-Mayo half-Tipp jersey for the day,” joked Tommie.

Having watched Mayo as much as anyone over the years I asked Tommie for his opinions on Sunday’s game.

“Mayo are bound to be favourites. Against Tyrone I couldn’t understand why the bookies had Tyrone favourites. Mayo are vastly experienced, they had been in the last five (now six) All-Ireland semi-finals. Tyrone have promised a lot but they haven’t really delivered as such.

“Having said that and looking forward to the Mayo match. Mayo aren’t anything like they were in my opinion. They are not the complete package that they were - if they ever were one - and in my mind they were but it was bad luck or lady luck that stopped their progress before. Certainly in Limerick that day they had no luck. But they are not the team they were two or three years ago.

“Against Westmeath they had 20 minutes of pure brilliance and 50 minutes when they were very very average. Against Tyrone they held on by their fingernails; they had less possession against Tyrone, they kicked less, they had less shots at goal. It was experience that got them over the line. What got them across the line was luck this year. (Laughing he adds) If Mayo’s tradition holds true their luck is going to run out again, and hopefully it will be against Tipp.

“Tactically I think Liam Kearns is very astute and he is definitely getting the best out of his players. Across the road (Clonmel Sportsfield) against Kildare in the league this year, Tipp were shocking. But they have come on so much since.

“The big thing for Tipp this year was beating Cork in Thurles. That was immense and we will still see that reward next year. The rewards for beating Cork are just unquantifiable really. That got them to the last 12 and it gave them a break after losing to Kerry before the qualifiers this year. But next year it will put them straight into a Munster semi-final and the possibility that Cork and Kerry could meet in the other half. That’s a reward for beating Cork. And forgetting about the Munster final this year, getting into the last 12 after beating Cork and getting the long break (before the Derry game) and not going into a qualifier with our tongues hanging out like in previous years, where you might have to play three matches in a row. No we went into the Derry game rested and that was another reward for beating Cork,” concluded Tommie.

Tipp senior footballer Alan Campbell poses with his dad Tommie, a native of Charlestown, County Mayo, at the scoreboard at Monroe last weekend. Tommie will be discarding the Green and Red jersey on Sunday to get behind Liam Kearns' side as they bid to reach Tipp’s first All-Ireland final since 1920. (Pic thanks to Pat O'Connor)