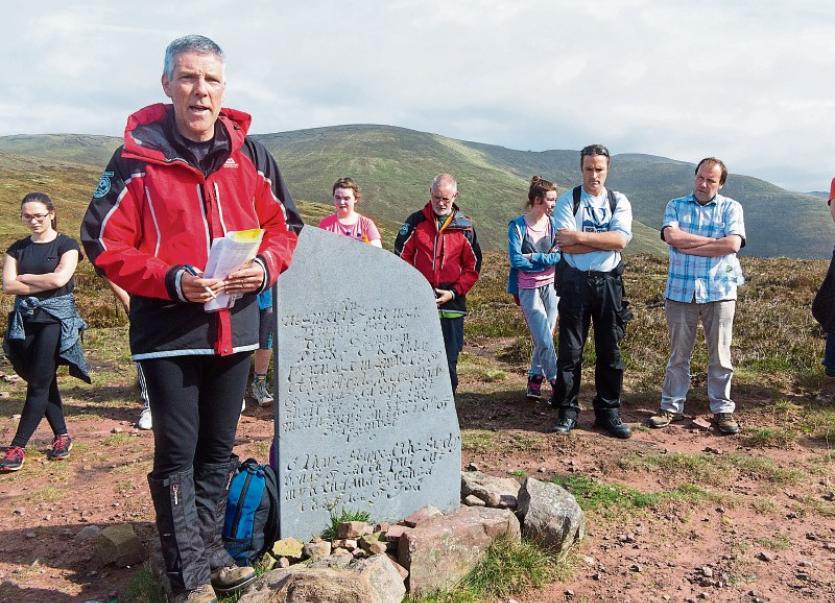 South Eastern Mountain Rescue Association members, local people and relatives of three Longford men who died in an airplane crash in the Galtee Mountains marked the 40th anniversary of the tragedy at a memorial in the mountains near Skeheenarinky.

Their bodies were recovered from the wreckage of the plane that crashed in the Galtees above Glengarra Wood the following morning by a team of rescuers including members of the Gardai, Defence Forces, Civil Defence, the crash victims' families, members of Tipperary Adventure Sports Club and local volunteers.

The stone monument sculpted in the form of the tail section of a plane was erected in 2006 to mark the 30th anniverary of the plane crash. It is located off the Black Road near Skeheenarinky that leads to the Galtee Mountains.

Family members paid tributes and memories were shared during the very moving occasion. Relatives could see the mountains and the crash site in the distance. This had not been possible at the commemoration 10 years previously due to poor visibility on the mountain that day.

A small number of relatives and members of South Eastern Mountain Rescue continued on after the gathering at the monument to the remote crash site high on the mountain side.

The Air Corps, which played a key role in the search and recovery back in 1976 were represented at the commemoration by 2nd Lt. Niall Dungan.

Since SEMRA was founded in 1977, the Association's rescuers have responded to three light aircraft crashes in the South East and one in Wicklow. The most recent was the air crash in the Blackstairs Mountains in May last year that killed two men.