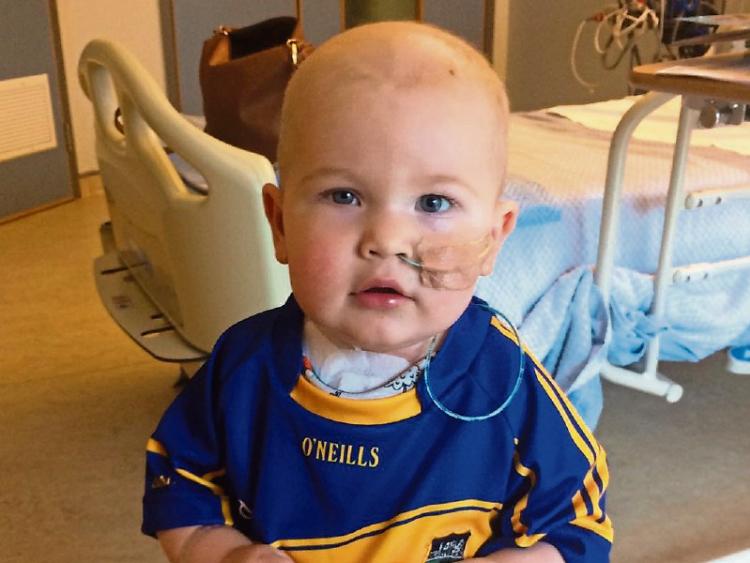 The community of Newport in north Tipperary have been rallying to help a young family whose 20 month old son was diagnosed with an aggressive form of cancer earlier this summer.

Twenty month old Evan Jones was struck down with an extremely rare form of cancer last July after his parents noticed their young son was suffering with a wheezy chest and a droopy eyelid.

Following a visit to the local doctors his parents Marisa and Paddy were referred to the University Hospital Limerick for a second opinion where their worst nightmare was confirmed. Doctors explained that Evan had a large tumour growing in his neck which was compressing his airway and putting pressure on a nerve causing his eyelid to droop.

Within minutes the family were rushed to Our Lady's Children's Hospital Crumlin to meet with an oncology team who explained that Evan's airway was now only 2mm in size.

However due to the location of the tumour doctors said an operation to remove the growth was extremely risky and instead placed Evan on a heavy dose of chemotherapy to shrink the tumour.

Unfortunately the chemo did not have the desired affect the medical team were hoping for and doctors decided that a high risk operation to remove the tumour was the only hope for the toddler. Doctors operated on little Evan over nine hours and successfully removed the growth much to the delight of his parents and his new baby brother Ben. 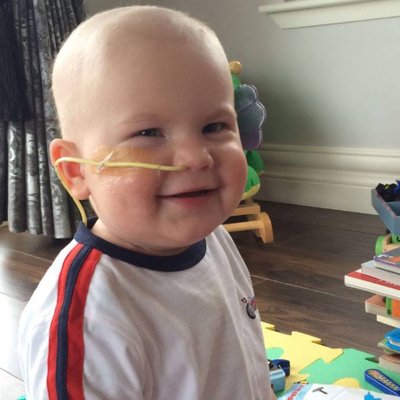 However the families joy was short lived as a biopsy result showed that Evan had a malignant Rhabdoid Tumour which is commonly seen in children under two years of age. Evan has now been placed on an intensive course of chemotherapy and radiation treatment in Crumlin. A stem cell transplant may also be required in the future as well as possible further treatment in Germany.

While his parents moved to Dublin with the support of the Ronald McDonald house to be at their eldest son's side, the community of Newport began putting together a fundraising committee to help the young family defray some of the costs involved with Evan's treatment. Within weeks a 'Team Evan Jones' Facebook page and Twitter account were set up alongside a Go Fund Me account with a set target of €15,000. And since going live the Facebook page has become a viral hit collecting more than 1,100 fans and over 20,000 views.

"There has been a great reaction from everyone in the area so far, says Team Evan committee member Michael Coffey who adds that two events have also been organised for the end of October and early November to add to the fundraising efforts.

The Jones family wish to thank everyone who has contributed, organised and helped Evan so far on his road to recovery and add that despite all he has been through and the tough road that lies ahead he remains a happy and carefree child and proud big brother to two month old Ben.

Dates for the diary

Bank holiday family fun Run/ Walk fancy dress for Kids and bit of fun for all the family, raffles prizes for best dressed, Team Evan wrist bands to show support available for participants, BBQ after the event and a special guest Liam McCarthy along with some of the Tipperary hero's will be visiting. Registration from 12pm at Newport Community Centre.

Benefit night in the community centre Newport, Live band, DJ and Bar on the night. Limited Tickets available over 18 only, Monster auction on the night plus raffle draw on the night. Raffle and benefit night tickets are available from Team Evan Jones committee members and local retail outlets in Newport.

Great night out in support for Evan Jones on Saturday the 5th of November. Come join us and help us raise some funds with "TEAM EVAN JONES"! pic.twitter.com/KBf4Z7iNIV

To donate to the Team Evan Jones fund online visit www.gofundme.com/teamevanjones or donate directly to the account at Mulcair Credit Union in Newport. Account name is Team Evan Jones.