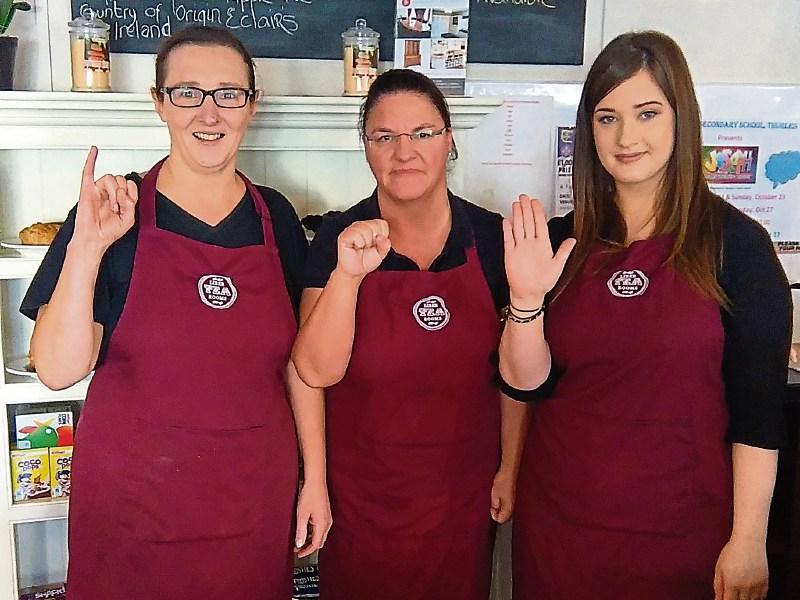 Staff at Liber Tea Rooms in Liberty Square, Thurles are calling on secondary schools to run Irish Sign Language classes for Transition Year students after they learned ISL to communicate with a fellow co-worker.

Cathy Carr, from Knockmaroe near Upperchurch, was born deaf and began working at the busy Thurles tea room three years ago, initially communicating with her colleagues through pen and paper.

Within a few weeks Cathy's co-workers had already started learning basic words and phrases so that they could greet Cathy when she arrived for her shift.

However when team member Barbara O'Donohue began asking Cathy how to sign extra words she decided to sign herself up for sign language classes to further her understanding of ISL. To Barbara's dismay there were no courses running in the area so she decided to enrol in an Irish Sign Language course online. Meanwhile manager at the tea room Marietta Doheny also downloaded an Irish Sign Language app to her phone so that the co-workers could practice during their lunch breaks.

“At our first Christmas party we all brought pens and paper so that we could talk to Cathy but by the second year both myself and Marietta were able to have proper conversations with her,” explains Barbara.

“We've had a few of Cathy's friends come in and others from the deaf community and they are often so surprised when you are able to sign back. If you only know basic signs it can mean a lot to someone,” she adds.

Cathy, who also relies on lip reading to communicate, now says she is “thrilled” to be able to chat to her colleagues and teach them extra words and phrases, even introducing a new 'word of the day' to keep her co-workers on their toes. All staff now agree that there is a need for sign language classes in the area with Cathy suggesting that schools in the town offer classes for Transition Year students.

“ISL is easy to learn and can mean a lot to someone when you can say hello and ask them how they are,” says Marietta.