Club history is a must for all north Tipperary people. 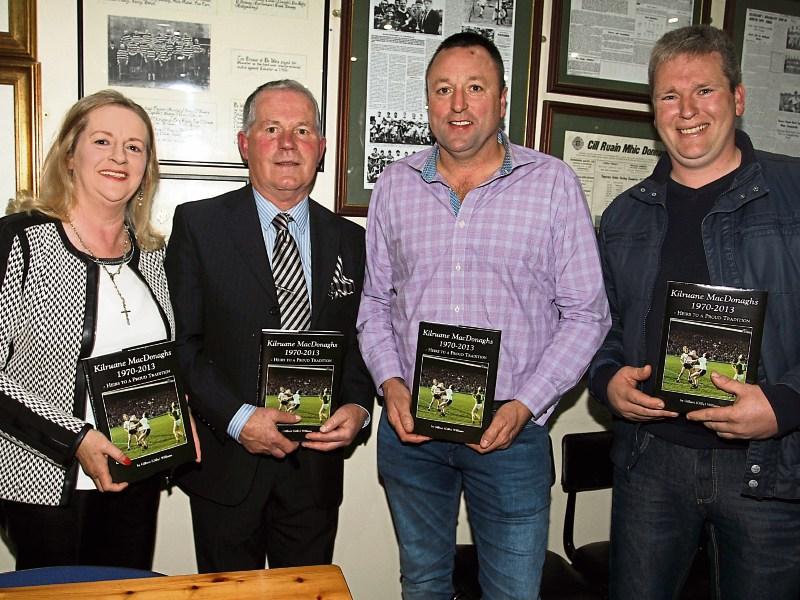 There was a great air of celebration in the parish of Cloughjordon this week following the launch of the up-dated club history of Kilruane MacDonagh, penned by local man Gilbert Williams.

'Heirs to a Proud Tradition' is a remarkable account of Gaelic Games in the parish from 1970 onwards - the history up to that period had been completed by Canon White, but there were many glory days to be recalled since, and following retirement from his job as local school Principal, Gilbert Williams took on the enormous task.

The end product of two and half years of hard work is a beautifully crafted publication which will adorn the bookcases of homes in the parish, the north division, throughout Tipperary and indeed much further afield. It is an excellent book and the magnificant launch night was very appropriate considering the quality of the publication.

Tom Williams sings The Ballad of Thomas MacDonagh at the launch

The book was launched by clubman Len Gaynor, a man who has been central to many of the glory days of Kilruane MacDonagh. He spoke with great passion about the club and about gaelic games in the parish and noted how the book will be there for many generations to come to read about days of yore.

County Board Chairman Michael Burke and North Board Chairman Dan Kennedy were also in attendance on what was a very special occasion for the entire parish of Cloughjordon.

Club Chairman Matt Cleary described the book as being an inspiration and hoped that it would inspire future generations of Kilruane MacDonagh hurlers to emulate the feats of those included in the book.

There was music and song aplenty - Tom Williams performed the balled of Thomas MacDonagh, a song written by Roscrea man Seamus Doran and which will be recorded very soon, and there was also a wonderful poem from Bawnie Hayes which captured the spirit of the evening recalling the exploits of the substitute who finally gets his chance - it was written by Noel Joyce.

Len Gaynor recalled many great times with the club, on and off the field. The trips ot Lanzarote and New York were highlights away from the field, but the winning of the Munster and All-Ireland club titles were the big ones on the field of play. It was, he said, and extraordinary achievement for the club and he recalled three trains leaving Cloughjordon Station on the morning of the final.

The book is available locally and is a fantastic read for anyone with an interest in Gaelic Games, but especially for someone with connections to Kilruane MacDonagh's.