"The Blues" are in bonus territory 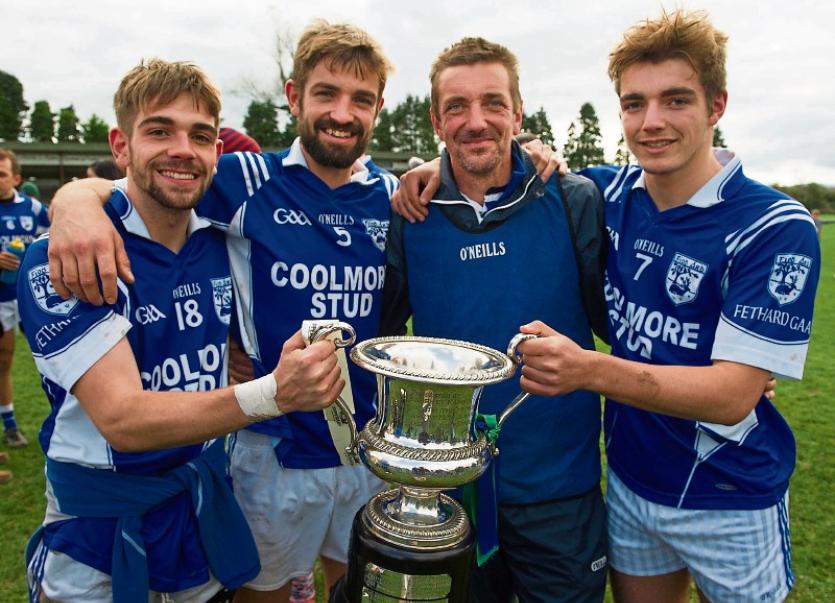 Following their first-ever County Intermediate Football Championship success on Sunday last, Fethard will quickly return to action with the visit of Kenmare Shamrocks to Clonmel Sportsfield on Sunday next in the quarter-final of the Munster championship.

Just seven days after the heroics in Leahy Park in Cashel, Cian Maher will lead his troops into provincial action but face a huge task against a highly rated side who not alone recently won their county’s intermediate title (where they defeated neighbours Templenoe) but also contested the senior final in combination with Templenoe where they lost out narrowly to famed Dr Croke’s of Killarney.

Kenmare, captained by Kerry star Stephen O’Brien, had a comprehensive victory over a fancied Desmonds side in the semi-finals while Templenoe, captained by Tadhg Morley, were no less impressive when accounting for An Ghaeltacht, albeit by just a two points margin in their semi-final.

In the final Kenmare defeated Templenoe by 2-11 to 1-6 having led by 1-8 to 0-1 at half-time the goal courtesy of Paul O’Connor with Sean O’Shea and Stephen O’Brien contributing well in a polished forward line.

Fethard, after a tough campaign, with hard-earned wins along the way over Clonmel Og, Borrisokane, Moyne/Templetouhy and Golden/Kilfeacle, are now in bonus territory. The club’s main aim at the start of the season was a return to senior football and that is now achieved. What happens in Munster will be a bonus but at least for Sunday’s game they will have Alan O’Connor and John Paul Looby both available again for selection having been ruled out of the county final. The fact that the game is in Clonmel must be a help also to the Tommy Sheehan managed side.

After Fethard’s win on Sunday, Tommy described it as a great day for Fethard.

“A great day for Fethard indeed, we are there now. Two years ago we got relegated and a couple  of the lads got involved and we thought it might be a three-year programme to get us back to where we should be, where we belong. We have exceeded our expectations and got back  in two but having said that it was a big fight for us all the way. There was nothing easy all year,” he added.

There is a great spirit of determination in the young side and they have been forced to dig deep on several occasions throughout the season.

According to Tommy, when they were questioned again last Sunday he said of his charges...

“But the one thing we had on our side was that the last four games, starting with the Clonmel Og game, continued in the very same pattern as today, they went right to the very last minute and we came out the right side of all of them. And we told ourselves today to keep in the game until two or three minutes to go and then we might be in a position to go on and win it,” said Tommy, whose three sons, Christopher, Jody and Tommy all played a part in the magnificent success.

Fethard will hopefully have recharged somewhat during the week and will make the short journey in the road boosted by their quicker-than-expected return to senior ranks after just two years.

They are very strong down the middle with former county keeper and current county selector Paul Fitzgerald between the posts. Gavin Fitzgerald was immense at full back on Sunday with team captain and former Tipperary inter-county player Cian Maher magnificently at centre-back. The midfield partnership of David Hayes and the workaholic Paul Moloney can hopefully match a formidable Kingdom midfield duo. Up front Brian Healy at centre-forward and Cathal Hurley at full will be Fethard’s main scoring threats.

Win or lose, as well as senior status next year, “The Blues” still have a South Intermediate Final to come against the winners of Clonmel Commercials and Fr. Sheehy’s.

The game in Clonmel starts at 2.30 pm with Alan Kissane of Waterford in charge of the whistle. The winners will have a home game in the semi-final against Clare champions Kilfenora.