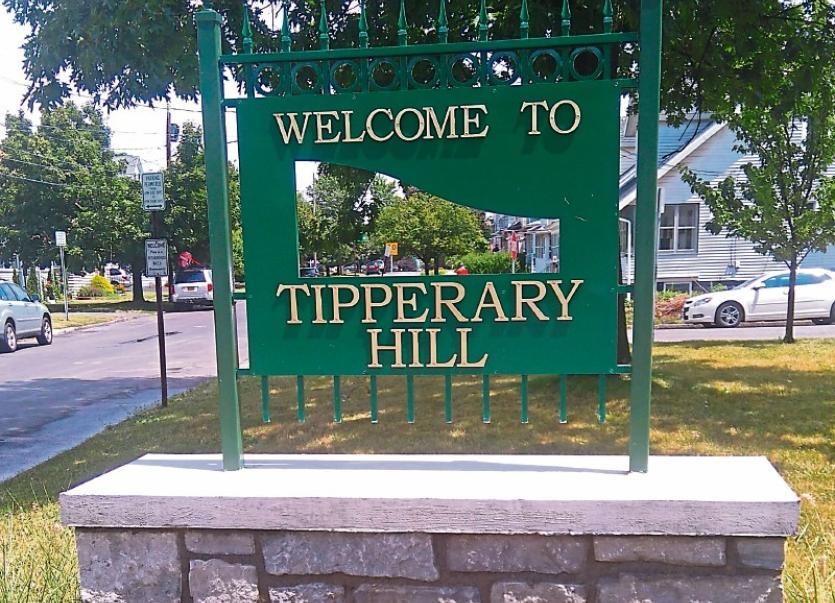 For centuries the Irish have emigrated all over the world and named many of the places where they settled after towns and districts back home.

Sizeable contingents from the same county would often flock to a particular area with the result that generations later, many of their descendants would claim to feel a deep connection and identification with the ancestral homeland even though most may have never visited there themselves.

It's a fascinating and often under researched topic but one which is to be the subject of a forthcoming two-part documentary due to be aired on Tipp Mid West Radio when the connections between one such place in America and the Premier County are investigated.

Tipperary Hill is a district in city of Syracuse, in Onondaga County in the state of New York. It's located roughly 300 miles inland from both New York City and Boston. Simply put, Tipperary Hill is purported to have got its name because of the sheer amount of immigrants who had settled there by 1860, that came not just from Ireland, but from Co. Tipperary.

Not surprisingly the majority of these immigrants arrived during the Famine but the programme reveals that numbers also made the journey from Co. Tipperary during the Revolutionary War of the late 1700s and from 1817 onwards with the construction of the Erie Canal. Today Tipperary Hill is a thriving community with many of its residents extremely conscious and proud of their districts links to those who arrived from the Premier County.

A large number of their descendants have also traced their ancestry back to particular areas with Cashel, Thurles, Upperchurch and Ballyporeen amongst the locations pinpointed by interviewees to the programme.

In addition to investigating with American contributors what drew these early settlers from Co. Tipperary to the Syracuse area and how they fared when they got there, historians Des Marnane from Tipperary Town and Seamus King in Cashel offer an insight into the kind of place Co. Tipperary was to live, during the first half of the 19th century when the bulk of the emigration was taking place.

Des Marnane, well-known for his extensive research into the Famine, also provides some heart wrenching eviction and emigration figures pertinent to the county for the period.

The documentary also sheds light on the discrimination faced by the early Irish in the city of Syracuse and investigates the origins of the famous 'Upside Down Traffic Light' in Tipperary Hill which many link to the ancient practice of stone throwing associated with the Premier County.

Part one of the revealing documentary entitled ‘Conquering Tipperary Hill' by Tom Hurley was due to be aired on Tipp Mid West Radio on Monday 7th of November at 11.30am.

Part two will be broadcast at the same time on the following week. The programmes can be heard outside the county on www.tippmidwestradio.com.