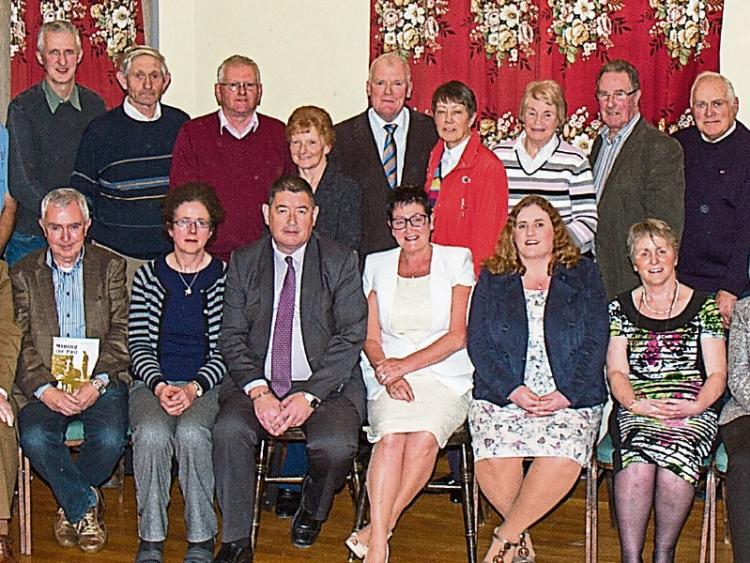 Local historian Danny Grace, back, centre, with some of the contributors to Mining the Past Vol V

Emigration, social life, and music and are among the themes explored in the fifth volume of Mining the Past, the journal of Silvermines Historical Society.

Mr Whelan said that the 39 chapters added to the rich canvass of life in the area.

He was particularly taken with the personal recollections in which the contributors sought to preserve for future generations information that would otherwise have been lost.

Mr Grace described the journal as “first rate”, and praised the quality of its photographs.

Among the contributions, Nora Gleeson O'Meara tells the story of five generations of her family that emigrated to New Zealand, beginning in 1852. One of them became the owner of several hotels there and head of the Auckland St Patrick's Day celebrations.

She reveals that has never been a break in communications between her family in Silvermines and those in New Zealand over the last 164 years. The Gleesons even have a road named after them in Waipipi.

John Kennedy's collection of folklore recordings made by children in local schools in 1937 will be of great interest. These were part of a national initiative under which children were asked to record stories of local folklore from their parents, grandparents and older members of the community. The stories include accounts of the patron saint Odhrán, of holy wells, old forts, ring forts, and the tale of treasure left behind by Cromwell at Longstone Hill.

We may think of saunas as a Swedish invention, but Joan Kennedy has chapter on old Irish tigh an allus / sweat-houses, which can be found at Hollyford, Curreeney and Bollingbrook. Such places are rare for this part of the country, and were used to treat rheumatism, pleurisy, pneumonia, colds, chills, fever and other aches and pains.

With more and more urbanisation, many of our field names are disappearing, but Patricia Mulqueen, Maureen Steed and Maura McLoughney aim to preserve such richness and reveal the origin of field names in Coolagh, Ballinaclough, Ballyvandron, Bayly Farm, Lisatunny, Ballygasheen and Stream.

Not surprising, the 1916 centenary also figures

Bridget Butler pays tribute to local music teacher Kathleen Bourke. She presented a framed sheet of music to the late Mrs Bourke's son Enda, and brought's proceedings to a close on the concertina, accompanied by local tap dancer Susie Keyes.

Historical society chair John Kennedy revealed that work is already underway on volume six, and in his foreword to the current edition, invites readers to become contributors themselves, or to suggest a topic that could be researched and recorded.

Mining the Past is available in Kennedy's shop in Silvermines and Ryan-Lacken's in Dolla, and in Nenagh at Eason, The Nenagh Bookshop and Costello's on Ciamaltha Road, priced €10.