Clonmel Racecourse gets ready for its biggest day of the year 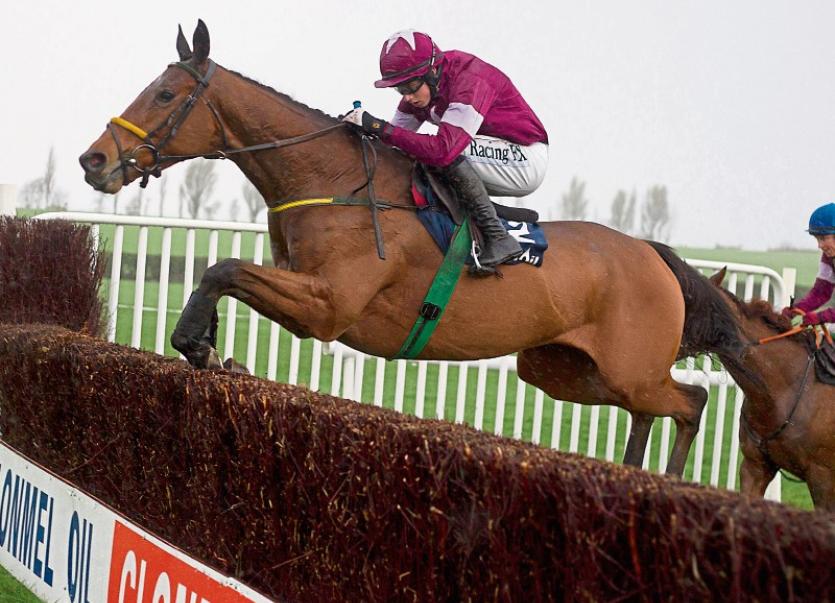 The annual Clonmel Oil Steeplechase is the day that the stars of National Hunt racing come to town and the feature race has frequently proved a happy hunting ground for some of the country's top trainers.

Noel Meade, Willie Mullins, Edward O'Grady and Henry de Bromhead have all been in the winner's enclosure at Powerstown Park at this traditional November meeting in recent years.

Top chasers including Noel Meade's Road to Riches (pictured above on his way to victory last year), Champagne Fever and Avrika Ligeonniere (both trained by Willie Mullins and who were successful in 2014 and 2013 respectively) have been successful most recently and the stage is set for another memorable Grade Two race next Thursday November 17.

A very strong entry for the chase of €50,000 at Clonmel could see the Noel Meade-trained Monksland try to emulate stable companion Road To Riches.  Monksland is one of 15 entries and was still very much in contention when falling in the JNWine.com Champion Chase won by Valseur Lido at Down Royal last Saturday but is none the worse after than mishap.

Trainer Willie Mullins has four entries to choose from including the 2014 winner, Champagne Fever, who did not race at all last season.

Black Hercules, winner of the JLT Novice Chase at the Cheltenham Festival last March and Ballycasey, successful in the PWC Champion Chase at Gowran Park last month, are also entered along with Alelchi Inois which gives the Closutton stable a strong hand.

There hasn't been a British-trained winner of the Clonmel Oil Chase since Henrietta Knight’s Edredon Bleu scored in 2003 but Kylemore Lough, winner of the Ryanair Gold Cup Novice Chase at Fairyhouse last March, could represent trainer Kerry Lee.

Outlander, who finished runner-up to Kylemore Lough in that Fairyhouse race, is one of three Gordon Elliott entries as he bids to win the race for the first time. Elliott also has Clarcam and Roi Des Francs entered.

Fethard trainer ‘Mouse’ Morris last won this race in 2005 with subsequent Gold Cup hero War Of Attrition, and he could be represented by new recruit Smashing who is sure to improve on his recent Punchestown effort. Smashing will relish the rain that has fallen and is particularly effective at this two and-a-half mile trip.

"This is the big day of the year at Clonmel Races", says Powerstown Park marketing manager Eugene Cooney.

"It's the fourteenth year that Clonmel Oil have sponsored the chase and we're very grateful for their continued support.

We get great support for this day from neighbouring counties Kilkenny, Cork, Waterford and Limerick. We're hoping that the people of Clonmel and South Tipperary will also come out and support the day in the same way Kilkenny people support the Thyestes Chase and the people of Listowel come out for the Kerry National".

He said there would be another strong supporting card this year. Last year's meeting featured a winning run by Vroum Vroum Mag, who subsequently won the Mares' Hurdle at the Cheltenham Festival and the Champion Hurdle at Punchestown after landing the TA Morris Memorial Mares Steeplechase at Clonmel.

Gates will open at 11am and the first race goes to post at 12.35.There will be live music in the Club Stand bar after racing.

Special all-in tickets are now on sale for €25 from Eugene Cooney at the racecourse offices at the Davis Road, Clonmel (tel. 052-6188508). This great deal includes admission, a race card, a main course lunch and a €5 tote bet.

As it prepares to host its most valuable card of the year, Powerstown Park is approaching the end of what has been a good year for the racecourse, with increased attendances at every meeting so far this year.

"The buzz seems to be coming back into racing after a couple of quiet years and we hope that Clonmel Oil Day will continue that trend", says Eugene.

It has also been a very successful season for Tipperary GAA teams; and following the success of the county's Minor and Senior hurling teams you never know who might turn up at Powerstown Park next week.